So… let’s make this a short and simple one, shall we? 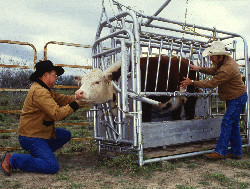 Feel bad? You could go vegetarian, but that takes sacrifice. Luckily, modern science has a way around almost every dilemma. At universities in the U.S. and Europe, researchers are busy cultivating meat in petri dishes.

Dr. Vladimir Mironov, whose name seems well-suited to a Frankenfood scientist, is an associate professor at the Medical University of South Carolina. He’s been working toward developing lab-grown meat from stem cells bathed in a nutrient-rich bioreactor mixture for the past decade, according to ABC News. He and Nicholas Genovese, a research associate backed by funding from PETA, are working on customizing the taste, texture and nutrient content of “in-vitro meat.” The going is slowed by lack of funding and high costs (right now, a single lab-hatched burger would cost tens of thousands of dollars to create), but their goal is to get their meat from the agar jelly to your plate as soon as possible.

Weekend WTF: He EATS The Chicken In A Can!

Two words: Soylent Green. The above sounds about that appetizing. I love meat. I don’t mind eating less of it and paying more’cause I love meat. But I want real meat. From a real cow, pig (sorry Erika), chicken, turkey, fish, shellfish, etc… It’s like when they invented “Krabmeat” or soy cheese or “olean” chips. Just give me the real stuff. sheeesh

I’m going to have to back JoAnna on this one. Either be vegan/vegetarian or to me just eat the real thing. Besides these doesn’t really solve the issue described in the first paragraph and we all know what happens when man starts working his “magic” in labs. I shudder to think of the long term effects. We need to find ways to do things in conjunction with our environment. Again, we are dealing with symptoms and not the underlying issues.

BTW PETA is really getting on my nerves. It’s really hard to want to support them when they are sooooo mean about anything or anyone associated with meat. I.e. the billboard using large people to shame/force people to be vegetarians. Uhhhh they bother me to no end.

These comments are depressing. Why is it so hard to have enough empathy for these horribly abused animals? Seems their interest in not being abused (as all factory farmed animals are) and not being killed (as all food animals are) trump your “ick factor.” For heaven’s sake, just get over yourselves.

Good grief. If I ask the question “would you…” and the commenters answer about themselves… no, they don’t need to “get over themselves.” ALL animals die or are eventually killed by sheer essence of the food chain. I’m all for reduced consumption of meat but please… be rational. Eating something created in a lab to REPLACE something created by nature is the most foolish thing I’ve ever heard. I’d sooner kill an animal before I let a lab kill ME. Sounds like the better advice for YOU is to think a little more about yourself. It’s about much more than an “ick factor.” Let it go.

to answer the question- no I won’t eat lab grown meat- however I see the irony in this. If someone is that queasy about killing an animal that has feeling for its meat, and is considering eating this lab grown meat- the question is, why can’t you be vegetarian?

I’ll have to pass on the man-made meat. I wonder if the nutrient-rich bioreactor mixture (of what?) used to make the meat will cause more harm to the human body than just eating the cow.

Given we all eat lab created food already, why focus on just meat? No one is overly concerned about the gm crops, or the plastized fats used to increase the shelf life of products. A Twinkie should NOT survive decades!

Strangely the only thing that really gets people excited and defensive is talking about synthesized meat. Strikes me it’s less about the real issue than it is some kind of strange obsession. If we were really concerned about lab created Frankenfood, no body would eat 80% of the products in the store.

Strikes me that this would be the best kind of lab food, reliably mass produced perfect steaks would allow me to eat and steak far more often!