The man, whose identity has not been released, was eating by himself when he began complaining of chest pains, started sweating and stuttering his words, said Jon Basso, the restaurant’s owner.

“I was in the back cooking and the nurses came back and said ‘someone is having a heart attack,’” said Basso. 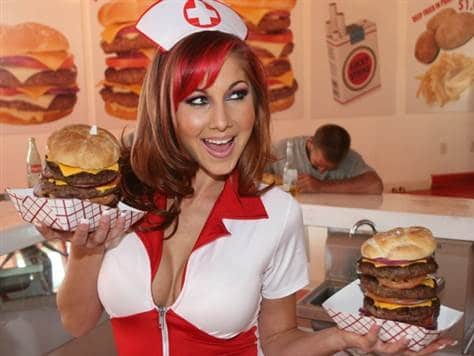 At first Basso didn’t believe it because in the hospital-themed restaurant, where wait staff wear sexy nursing uniforms, and the diners are outfitted with hospital gowns, the employees and customers sometimes role play.

“No, he’s really having an f-ing heart attack,” one of the employees told Basso, he said.
Basso, who goes by the name “Dr. Jon” in the restaurant, and who plays the role in a white doctor’s coat and stethoscope, called an ambulance and paramedics were quickly on hand to treat the man, who Basso described as a normal, “run-of-the-mill” guy in his 40′s.

The customer, who is in his 40s, was reportedly recovering in a nearby Las Vegas hospital after the attack, said Basso, who is not a doctor.

The burger joint, whose slogan is “taste…worth dying for,” is known for its self-proclaimed unhealthy food. A sign on the front door reads, “Caution: This Establishment is Bad for Your Health.”

In addition to the now infamous bypass burgers, diners can also enjoy fries cooked in pure lard, and butterfat shakes. A huge neon sign above the restaurant’s door advertises ”Over 350 Lbs Eats Free”. But they must prove it, by weighing in on a scale in the middle of the restaurant.
So what’s on that Triple Bypass Burger? Three half-pound hamburger patties with buns dipped in lard, half of an onion cooked in lard, a whole tomato, 15 pieces of bacon, cheese, and special sauce.

Estimated at 6,000 calories, Basso stated the obvious when he said, the “burgers are higher cal than your typical burgers.”

In an interview with ABC News last year, Basso said his food can be viewed as “absolutely evil.”
“I genuinely hope that people continue to eat in a sinful way, but moderately,” he said. “I don’t want to see everyone come into my restaurant every day. It’s a once a week, cheat day thing.”
Basso used to own a Jenny Craig franchise and fitness center, but left the fitness business because he did not feel he was reaching anyone, he said.

The Heart Attack Grill came under fire last year when its spokesman, 6’8″, 570-pound, Blair River died last year of pneumonia at age 29. It is not possible to say what role River’s weight played in his death.

“I hired him to promote my food,” said Basso. “We are absolutely guilty of glorifying obesity.”
On Saturday evening, customers close enough to see the customer having a heart attack were “mortified,” said Basso.

Tourists were less sympathetic, apparently thinking they were witnessing nothing more than a fit of acting or a publicity stunt — since the restaurant sometimes wheels healthy customers in an out of the restaurant on wheelchairs.

“It was horrible, the tourists were saying ‘hold on, slow down, let me get a shot,” Basso said.

It’s one thing to enjoy decadence… it’s another thing, entirely, to go HAM like this. I wrote about the heart attack grill back in 2011 and read the story about Blair, the restaurant’s “mascot,” then. It’s incredibly sad – and creepy – that this is how he’s making his money. I’m sorry, but three half-pound burger patties, fifteen strips of bacon… at some point, you’ve got to realize you’re just eating for the novelty of it all and not the taste. It stops being an issue of decadence and starts looking obnoxious after, say, the 5th or 6th bacon strip. (And I say that as someone who doesn’t even eat bacon!

At any rate, I’m glad the gentleman who suffered the …let’s just not say it… is still alive and recovering well. Here’s hoping that people who choose to eat there are far more judicious in picking their dishes…or their choice of restaurant.

The Quest For Healthy Body Image

Yes, it’s all good fun until some pokes their eye out, or has a heart attack.

Making jokes about something is a common, albeit immature way of avoiding actually dealing with an issue.

Let’s hope the absurdity of the situation helps someone, anyone, to say enough is enough and make better choices.

I saw this restaurant on Guy’ Fieri’s triple D and got sick. The burgers were wayyyyyy over the top. I could easily see someone have a bypass after eating there, so this story comes of no shock. Most of the people that were in the restaurant that day, appeared to be 1 heart attack away. Praying for the patient’s return to better health and eating.

This grill shouldn’t even be in operation (no pun) let alone have customers. Reading the burger description made my stomach hurt. Lard?! Seriously?!

I am now “overweight”, down from being obese and before that, morbidly obese. I never wanna go back there. It baffles me that anyone would voluntarily eat anything that’s 8000 calories (skinny or obese) and somehow think they won’t suffer a consequence. Being unhealthy is nothing fun.

They need to have that item forcibly removed from their menu.

UGH. I just watched the ABC video clip about Blair River’s death, and the things “Dr. Jon” says, are ridiculous. He’s using “shock therapy” of selling 6000 calorie burgers to wake Americans up to their eating problems? No you’re not! You’re trying to make money. If you really wanted to wake them up, make a restaurant with delicious healthy food, and on the menu have tidbits about eating healthy and proper nutrition. He even said the poor man’s death gave him no pause. Sad sad sad.

Nothing wrong with a good burger and bacon certainly rocks any burger but his is ridiculous. 15 strips could last me over a week if I chose to eat it daily. (boy wouldn’t that be nice!)

We live in a world of extremes. Everything has to be bigger and better. Technology, personal possession, extreme sports and apparently food falls in the way of having to be bigger and better. No one is satisfied with “normal” any more. I don’t think anyone knows what normal even is anymore. You hear rave reviews about restaurants who serve huge portions and complaints about other restaurants that have “tiny” portions, which are probably normal. Crazy world.

Hope the customer sees this as a wake up call from God. Stay outta places like that. You’ll live longer.

I live in Australia and this made the media here as well…. An ‘accident’ waiting to happen!

It’s sad that people would actually support this restaurant. “This establishment is bad for your health.” Why is this place still in business?