Dude. This is a joke, right?

It’s a simple idea, really. And, like many simple ideas, a big one. Starting officially at 12:01 a.m. on March 8, Taco Bell will attempt what CEO Greg Creed calls “…definitely the biggest launch in Taco Bell history.” It’s the Doritos Locos Tacos, which loosely translates to a taco shell made out of Doritos. 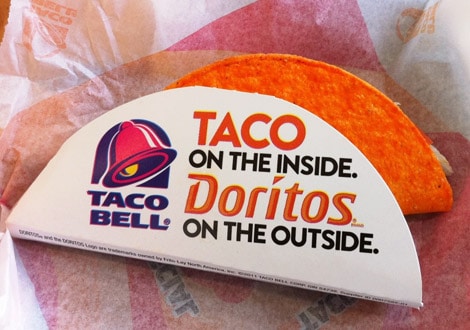 Though most likely developed by a stoned college kid in his dorm room many years ago, the concept was initially proposed by the Frito-Lay company (a subsidiary of the PepsiCo Corporation, also Taco Bell’s former parent company) in January of 2010, and first tested in Toledo, Ohio, in September of last year. “People at Frito-Lay have been amazing to work with,” says Creed of the partnership, and both companies fully expect the first type of Doritos Locos Tacos, the popular Nacho Cheese flavor, to be one of many (Cool Ranch being the obvious runner-up, though there are currently 123 different flavors of Doritos worldwide to choose from).

Taking a first look at the Doritos Locos Taco (again, it’s a taco shell made out of Doritos), let alone tasting it (and yes, it tastes pretty much like Doritos), it’s easy to be surprised at amount of detail involved in the process of its creation. For one, there was the issue of shape. Doritos, historically, are shaped like triangles, and triangles (despite the probable conclusion of the above-mentioned stoned college kid) do not make good taco shells. The first solution to this problem was simply to put Doritos seasoning on a Taco Bell taco shell, and predictably, this solution failed. According to Steve Gomez in product development, “What we learned was that Doritos lovers and Taco Bell lovers, have really big expectations for this idea.” And so Gomez, along with his team, and the product development team at Frito-Lay, went about creating a new kind of dough that mimicked the traditional Doritos recipe yet was thicker and held less air, so as not to break — this new dough was also pliable enough to be formed into the shape of a workable taco shell. Four separate factory lines were then built for the specific replication of this shell, and on March 8, more than 60 million of them will be shipped all over the country. [source]

The Quest For Healthy Body Image

My Struggle With Quitting Smoking And Weight Gain

GM.. I totally agree with you, not to think of the sodium content in it. Been trying to eat clean for about a month, about 80% there.

I thought it was a joke too until my husband mentioned how excited he is to try it. SMH!

I remember hearing this and thinking to myself: how absolutely disgusting! Now that I have seen the details, I know it must be! I can’t possibly think who would even want to eat this? The crap these large corporations sell us just keep getting worse and worse! UGH!!

Not really appetizing to me. Although I love taco doritos, I usually only indulge once or twice a year. The sodium must be off the charts! Taco Bell also has some kind of burrito filled with nacho cheese and sour cream and hot fritos (sp)! My stomach wouldn’t even allow me to eat something like that.

But honestly, how many zillions of millions would somebody make if they opened up a healthy chain food restaurant, with everything on the menu below, say, 300 calories per serve and 5 grams of fat, with less than 200 mg sodium?

It can’t be THAT hard to do, surely!

Mmmmmmm sounds delicious! Who could not like this taco? Taco Bell uses the best leftover beef scraps then treats them with ammonium hydroxide until it’s a runny, pink, meaty paste. Then their cooks simmer it with MSG-flavor and irradiated special spices til its fork tender.

Yup and I’m only slightly ashamed to say I tried it a few weeks after it came out and enjoyed it. Skip that – not ashamed, I was curious, hadn’t eaten taco bell in a few years and wanted to try it. However since I began eating cleaner a couple of years ago, I can’t really eat fast food – my body physically rejects it and I feel horrible after. So I’ve been learning how to make some of my favorite fast food and processed stuff (like ham helper) at home this is something I’m thinking I might like to try at home!

Actually, I don’t think it’d be that hard to create from scratch, to tell you the truth…