Weekend WTF: Man Arrested For Cooking His Own Burger & Fries At Denny’s

This is, easily, the most elaborate dine-and-dash scheme I’ve ever heard of in my life:

In what could be the most colorfully-written police report of all time, a Wisconsin officer detailed a man who allegedly tried to dupe Denny’s employees into thinking he was their new general manager — and then cooked his own cheeseburger and fries. 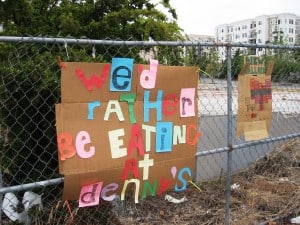 James Summers, 52, waltzed into a Madison Denny’s on Tuesday wearing a coat and tie and claiming to be a 30-year corporate veteran of the restaurant chain,according to a Madison Police Department press release.

Summers’ alleged plot was more devious than just defrauding managers — he wanted a free cheeseburger, and he wanted to make it himself.

The epic play-by-play incident report was written by journalist-gone-civilian-officer Joel DeSpain, who gave an interview to The Huffington Post.

“[Summers] never announced he was one of the pros from Dover, but the briefcase toting gentleman wearing a maroon tie and long black trench coat was quite clear: he had been sent by corporate,” DeSpain wrote in the report. “Surprised, and a bit shocked, the 38-year-old [manager] thought, surely, this must be a mistake. … Perhaps, she indicated to him, you have arrived at the wrong restaurant.”

But nay, DeSpain relayed, Summers said he was not at the wrong restaurant. The report gets even better:

This conversation developed into a tete-a-tete or a “nose to nose,” to quote the manager, as the man asserted his new role as she told him she thought not. This went on until he said it was final, he was going to commence his duties. It was at this point, the manager began making calls up-the-chain. … While on the phone, she waved off kitchen staff as they rapped on her door, trying to get her attention. She was not to be interrupted while talking with corporate. What cook staff wanted her to know was that the new “GM” was in the process of cooking himself up a cheeseburger and fries, and that he had gotten himself a soda.

After a bit of confusion, Madison cops stepped in and allegedly found an unregistered stun gun on Summers’ belt, as well as what appeared to be a few crack pipes, NBC News reported.

As cops walked the man out, DeSpain wrote that Summers yelled out to Denny’s customers, “This is why you don’t dine and dash, kiddies.”

Got a Weekend WTF to share with the class? Send it on over to wtf@blackgirlsguidetoweightloss.com!

Setting Goals: How, Why & Who Do You Tell?