Home Weekend WTF? Weekend WTF: What Is It With McDonalds And Prostitutes?

Weekend WTF: What Is It With McDonalds And Prostitutes?

So…this is gonna be a quickie…because I… I just… I can’t…: 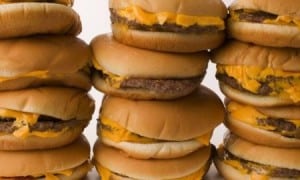 A woman went from fast food to life in the fast lane — and she says its all McDonald’s fault.

Shelley Lynn is claiming that the fast food giant should have protected her against her ex-husband and former bossKeith Handley, who hired her to work the counter twenty years ago, according to Courtroom News.

Lynn, who is suing Handley, his restaurant company Ivernia and McDonald’s in California Central District Court, said that she was at the mercy of a company that provided no protections for female employees against predatory bosses.

The trouble began in 1982 when Handley hired her to work at the counter in Arroyo Grande, California. The two began dating in 1985, but things got rocky when she lost her job.

Lynn says that Handley, who still runs the franchise, forced her termination to make her more vulnerable to his demands.

“McDonald’s had no policy in place whereby Lynn could have filed a grievance against Handley, Ivernia, and McDonald’s,” she said in the filed court documents.

Lynn, who was down on her luck, said Handley lied when he said help her fulfill her dreams of working as a Las Vegas dancer.

He bought her a home in Vegas to live in, but then told her she’d have to get a job as a prostitute in one of the legal brothels to pay for it.

“Handley then began pressuring Lynn on an almost daily basis, arguing… it was no big deal to engage in sex to make money, that she would lose her home and everything she had, which was true,” according to the complaint.

Lynn said she took a job at the Chicken Ranch in Nevada, where she became a “top booker,” required to sleep with up to 12 men in a single night.

Lynn and Handley wed in 1988, but soon divorced.

She says Handley should never have been allowed to open his franchise and that McDonald’s “failed to conduct a due diligence into the moral character of Handley when it sold franchises to him.”

She also says McDonald’s “failed to properly supervise and train Handley,” who she accuses of running his pimping operations out of the McDonald’s franchises he owned, according to the complaint.

Not that I’m in any rush to side with McDonalds, but I’m going to politely file this under the heading “You need more people.”

But, also… there’s this:

According to the Miami Herald, an undercover officer got Baker into his car last week. When she gave him her request, he complied.

The detective bought the two cheeseburgers for $2.75 and drove to a vacant lot where a group of officers were waiting to arrest her for prostitution.

According to the sheriff’s website, she was released on Saturday. It is unclear, however, if they let her eat the cheeseburgers in prison. [source]

I’m not sure what to say about either of those.

I would like to think that the lady in the first quote had a choice and she chose to prostitute herself for her dream or maybe just the money.

But I do understand emotional abuse and it seems she got that in spades.

It seems that the other lady was just hungry XD

Bwahahahahahahaha! The first chick needs to have a stadium full of seats. If she didn’t want to be a hooker she could have left that man AND the house. I really hope they let the second chick eat her burgers before she got to jail.

As far as the first story is concerned, I’m going to need her to have an entire stadium of seats because no.
It is not McDonalds’ fault that for whatever reason, she let a man force her into prostitution. This is not a young runaway or some other person who can’t fend for herself, this is a grown woman. If she didn’t want to be a prostitute or to be with this man, she didn’t have to. There were other options. So no boo boo. You may not pass go, and you certainly may not collect $200. What you can do is sit all the way down and remain seated for the duration of your lifetime.

As for the second story, the police officer was real rude for taking her to get the burgers and then carting her butt off to the jail. Smh.