Weekend WTF: He EATS The Chicken In A Can!

remember chicken in a can? 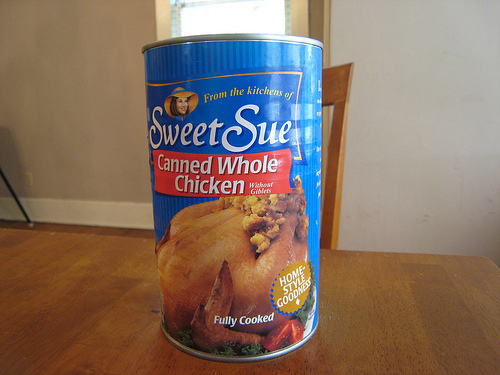 “I initially wanted to pull out the chicken and reserve the broth in the can, but the bones were too wiggly, so I had to pour it out.” and “Realized I did not in fact want to keep [the goo] and tossed it down the garbage disposal. I did taste it (the broth part, not the fat globs and mystery bits) with my finger and it was very weak like somebody had just dunked a chicken in some water.“

Excerpted from Weekend WTF: Chicken In A Can? | A Black Girl’s Guide To Weight Loss 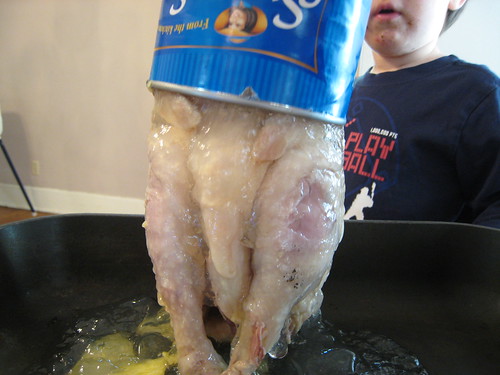 Welp, I think that was enough to turn me into an air-tarian.

Got a Weekend WTF?! to share with the class? Send ’em on over to wtf@blackgirlsguidetoweightloss.com!

I am thoroughly grossed out. That is the most disgusting thing … that’s just nasty. I feel sad for that young man. I can’t even … I just can’t even form words.

On a side note, what’s up with the food eating challenges and some poor person (usually a guy, usually larger) eating whatever people put in front of them. The more the better, the bigger the better. I’ve seen too many programs, segments, etc like this lately. I’m trying to understand the obsession with this type of thing. Is it a back hand slap to the eating well movement, is it a backhand form of self abuse, is it part of the “I’ll do anything for attention” climate we live in now or is it just harmless fun?

That was just nasty. As for eating challenged, they’ve always existed. The do one at Coney Island every July 4th. I think they have to eat Nathan’s hot dogs or something.

I mean I don’t read anything into eating challenges. Sometimes eating is just eating.

Man vs. Food has been on for years, but now there’s Man vs Food Nation. Hey, if people want to eat mounds of spicy, or whatever food, they can have at it. It’s a free country.

*ROLLIN* I think your statement took the words out of my mouth. That video was just flat out nasty, and I have to blame Erika, because she made me watch it. She knew we were going to read this blog and watch that video. LOL

But on a serious note, that was probably the most repulsive thing I’ve ever seen. It also made me sad. I can’t imagine how he must feel about himself. I’m just sad for him. I value myself far too much to even consider putting crap into my body for entertainment.

I have not seen or heard of this before in my entire life. I’m glad that it isn’t sold in this area o_O.

Air tarian ? you got me ROTFL like for real now I am going to watch the video

What in the four horsemen is that mess? It looks like the can gave birth to whatever that thing is.

There was a time when me and the kid depended on food banks to get by. You’d be surprised what comes in a can lol