When I first started out with exercise, I would take my daughter to the gym in our apartment complex during the hours when most people were expected to be at work. However… during certain seasons, the gym becomes a 24-hour pick-up spot. No matter the hour, it was always full of people. It became less and less sensible for me to bring my little one in there. It was starting to feel like I was developing an excuse to not workout – “I can’t go to the gym because the fellas are going to trample all over my daughter in her stroller.. she’ll be in the way. They’re going to put me out. I can’t go!” – and I had to do something.

So, my little one and I spent a good amount of time at home. Sad that I couldn’t use the gym equipment – and unwilling to spend money (in a recession, no less) on my own – I had to come up with an effective manner of getting in my exercise. My desire to not spend money on getting fit had only a little to do with the fact that I’m cheap (painfully cheap.) It had much more to do with the fact that I needed to know that the effort I was putting forth wouldn’t be dependent upon how much money I could spend to get it. I needed to know that my business could fail, I could go broke and poor and be homeless living with a friend and that I’d still be able to maintain my health on my own. That I could innovate ways to get it done, and that I was devoted enough to my cause to continue to innovate.

After enough reading and research, I got it. Meet… my dumbell. 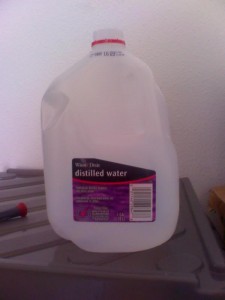 Oh, and I’m serious. Two gallon jugs that I could control how many cups are in them? Yes.

Look at it this way – a gallon of water weighs approximately 8lbs. There are 16 cups in a gallon of water. In theory, each cup weighs half a pound. If I pour 10 cups of water in each jug, I have two five pound weights at home to use. Simple as that. Obviously, you might not want that water sloshing around back and forth (if you did, you’d simply have an effective homemade Shake Weight) so feel free to use smaller containers, so long as you can maintain a good grip on it.

I also built a routine around calisthenics. Calisthenics are, in few words, exercises that consist of a series of movements that basically use the body’s weight against itself in order to build muscle. Think squats, push ups, jumping jacks, lunges. While you may not be able to increase the amount of weight (and actually hope that it decreases), you can increase the number of exercises you do and use different variations of the same exercise.

My last method of infusing my in-house day with exercise? Tabatas.

Tabatas are a four minute long method of interval training. 20 seconds of going as hard as you can, followed by 10 seconds of rest. A cycle repeated with 4 different exercises – totaling 2 minutes – and then your entire 2 minute routine repeated twice. This is great for early morning just-woke-up activity, or “Dang, I missed the gym, let me at least get in a little something” night time activity.

Between tabatas, calisthenics and my gallon jug dumbbells, I was able to get my exercise in at home when I couldn’t get to the gym with the little one. Hopefully, they’ll give you a few options in how to expand your at-home workout, too. 🙂

Establishing a home workout is so hard in the beginning cause you’re fighting the whole “I missed the gym so I’ll just make today a rest day” mentality. Problem is if you do this too much, you have more rest days then workout days. (This happens to me especially if I didn’t get enough sleep the night before.) My latest thing is if I don’t make it to the gym, I have to at least walk/run around the loop of my complex 3-4 times before going to bed.

It’s all in the mindset, one has to get their mind around the idea of working out at home and into a routine of working out daily before switching completely to the home workout routines.

Exactly! For me, I KNEW that if I let something get in the way of me doing what I needed to do, I’d sink into that same thing, too! This was my best way of protecting myself from that.

Got to get it in somehow, right? 🙂

GREAT post Erika!! I’m the queen of at-home workouts. OK, maybe I’m more like a chambermaid at this point. I have several workout DVDs, though there are always more that I can add to my collection. But, thanks to good ol’ YouTube, I have been able to craft a routine of sorts from several workouts I’ve seen online. My ONLY worry is with making too much noise when doing jumping jacks and such. I wouldn’t want to disturb my neighbors downstairs. However, I say a little prayer for them and keep it moving. I’m trying to get in shape up here!

LOL Your neighbors will be alright.

I suppose the neighbors will know your workout, though. *ba dum chhh*

Another good way to work out at home is Exercise TV via OnDemand or its web site. Free full workouts that kick your butt. I am a fan of Terri-Ann Krefting, Kendall Hodan and especially, Cindy Whitmarsh!

@CO, I was also going to suggest Exercise TV. I just discovered the website this past weekend and found the workout I chose to be quite challenging. (It was Cindy Whitemarsh!) I use two 1-liter bottles as my weights when I’m at home. I also have a “stretchy-band” (not sure what you call those!), and a yoga mat. With just those items, I can get a GREAT workout. I like your idea of doing push-ups using a chair. I can do about 12 on the floor, but my form is all jacked up. I need to build my upperbody strength, and I’m going to start doing addt’l pushups with a chair! Thanks! I’ll also be trying those walking lunges… tonight!

I am always looking for some quick remedies to begin my weight loss regime. I am glad that I am reading this site and especially reading this post because I am unemployed and a gym membership just doesn’t seem plausible at the moment. Thanks!

I love exercise T.V., if you have a computer search on YouTube for BeFit (they have a 90 day FREE program), BodyRockTV, and if you have an IPhone or Android check out Nike Training Club!

I will start using the On Demand on my television, hey put that cable to use and never thought of wall push ups have to try those. Thanks so much for the great hints I need to start this and keep it up.

I LOVE wall pushups. My tenth grade health teacher showed me those and I’ve been doin them ever since. I’m a sophomore in college. I heard, but never tried the chair one. Another I did was the couch and table pushups. Put your feet up on the couch, plant your hands on a FIRM table and let it rip!!! 🙂

I started watching what i eat, just one week today, i loss 4lbs, All i did was not drink sodas, and watch my carb intake, just imagine if i stick with it, Awsome…

Now that ExerciseTV is dead (RIP), what other web sites/DVDs/circuits are you all doing at home? (Before ExerciseTV went black, I bought a ton of cheap DVDs and downloads)

You can try Bodyrock.tv or Blogilates You Tube Channel or Blog

Hi! Are you able to give a Tabata exercise routine for the upper body?

Aaah nice idea for the push up on the wall at the beginning. I will do that because push up on the floor are too hard. I feel like my bones are about to break! I cannot even do one properly!

i love working out at home, especially i live across the street from a park and can run as part of it to. my only down fall with exercising at home is that it’s hard for me to stay consistent with it. i leave the house really early in the morning for work so it’s hard for me to do it then and in the evening, i’m so tired sometimes. i need better discipline with at home workouts. thanks for these tips though. i haven’t used the gallons of water yet.

Look at sites such as: collage video and total fitness for dvds, youtube has plenty of “trainers” that give free daily workouts as well. Try your thrift stores for used dvds, have swap meets for those same dvds. Always remember to read reviews where given. Go to BlogHer and see what you can find as far as ideas. http://www.spinning.com has a great deal on bikes. Don’t get the one advertised on tv, they have at least one cheaper model available.

Great article! I have compiled a nice list of at home memes that have workouts on them. Mostly I got them from facebook fitness pages. When I am ready to workout at home I put a few together and I’m sweating in no time. It also keeps it fresh because I combine them in different combinations all the time.

Never heard of the water gallon trick… pretty innovative. I love my newest YouTube find the team at Fitness Blender. They are a couple who believes workouts should be free to all. The website is hella user-friendly and searchable. http://www.fitnessblender.com/

I donated to their cause recently.