A: People grossly underestimate the difficulty level of getting and keeping a six pack. Like, I cannot express that enough.

The six pack is such a serious mastery level of fitness that not even the average fitness model or fitness competitor can keep one looking lean and tight for the entire year. They have on- and off-seasons just like the average athlete.

It’s hard to keep a six pack in check. I think the vast number of magazine articles centered around “six pack abs!” and the number of fitness models we see in magazines rocking them has convinced us that this should be an easy thing to accomplish, right?

Let me make this clear: it is not in any way, shape, or form easy or simple to keep a six-pack year round. It’s not even easy to keep one for the entire summer, if that’s your actual goal. (#croptops)

It’s worth noting that we alllll know someone who effortlessly keeps a flat tummy, likely because she’s always been lean and slender, or has always been shaped that way, or because she secretly grinds her ass off in her home at 4AM before the world sees her, or because her diet is so blindingly immaculate that you wouldn’t even be able to comprehend it, or because she has a recurring appointment in a surgeon’s chair, or whatever. The reason I bring this up is because the goal here is not to focus on the next woman and why it’s so easy for her (which essentially means I must be wrong)—it’s to focus on why you might be having a hard time, and what you need to do in order to realize your ultimate goal.

Speaking of surgeon’s chairs… I know that we’re inundated with images of gorgeous women with crazy curves and flawlessly flat tummies, but I’m going to caution you from using that as some kind of barometer for what is possible for you or even humanly possible at all. It was a long time before we could even legitimately quantify how many women were getting booty injection and implant surgeries, and many of those weren’t even on the up and up. A quick back alley or hotel room lipo is far easier to pull off…and far less dangerous, though it’s still dangerous, nonetheless. (I’ve talked about this kind of thing here.)

All that being said, here’s the deal. As a female, your abdomen is one of three places on your body where fat will cling to for dear life. (If you’re curious, the other two are your inner and outer thigh areas.) There are theories that presume that this has to do with preparedness for the potential of reproduction, or genetics, or whatever. For whatever reason, that is frequently the most difficult place to lose body fat. Men have an easier time losing body fat and developing six-packs because the level of testosterone they have makes muscle development easier, thereby making fat loss easier, thereby making a six-pack easier to achieve.

Six pack abs rarely appear on people who’ve never had them before if your body fat is higher than about 18%. You might start seeing lines between the muscles that separate the individual columns of muscles that line your tummy around 22%—that’s around where my body fat percentage was when I had those lines—but to have a full set of muscles there? Your body fat has to be low, low, low, low. (For the record, the *average* American, at 5’5″ and 154lbs is usually somewhere around 35% to start with. This graphic from BuildLean is great for helping people take a rough estimate of their body fat percentage prior to getting it measured in a more official fashion.) 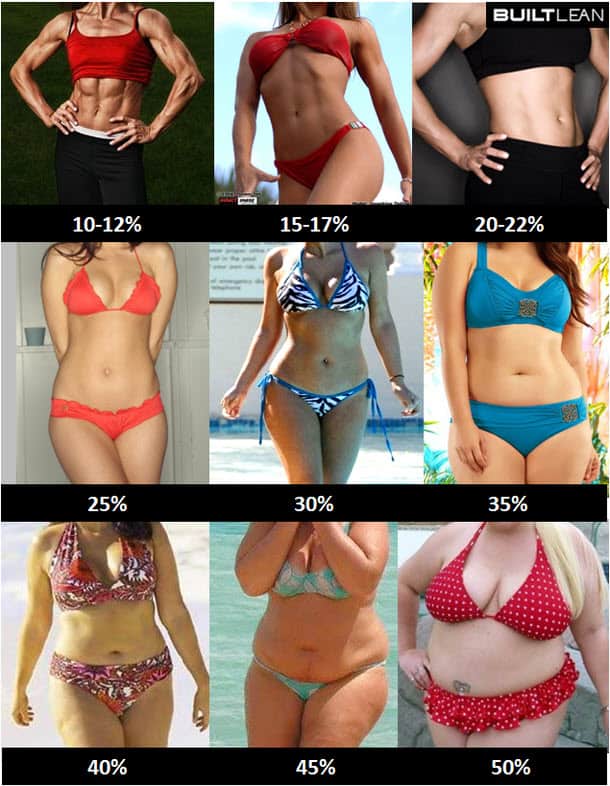 You’ll notice that, of the women in the photo above, there’s only a trace of a six-pack at the 15-17% mark, with the full actual six-pack happening around 10-15% body fat. I give a little more leeway here, because with black women, we tend to have different paths of fat distribution on our bodies, which means you could have less body fat in your tummy than would normally be expected for you body fat percentage, meaning you’d achieve your six-pack sooner.

I talk a lot about body fat percentage because it’s the most accurate measure for what it is most people are trying to achieve. You want to not only lose pounds, but you often have an actual goal in mind for what you want to see when you look in the mirror. Focusing on changing your body fat percentage is the best way to predict the kind of body you’ll have as you transform. Do you know what it takes to achieve 15% body fat?

Let me list all the ways your life has to change when your goal is 15% body fat:

Know what else it’d require:

I could go on and on, and break over 2,000 words on this list alone. And, even though you might shrug at this list and say “well, isn’t that what’s required in order to achieve weight loss, anyway?“—which, the answer would, for the most part, be yes—the truth of the matter is you could adhere tot his list 70% of the time and still achieve basic weight loss. To acquire and maintain a six pack for the entirety of a season means adhering to this 100% of the time.

For the average fitness professional, that explains why they rarely have a social life—their social lives involve the gym, revolve around the gym, with activities engaged in with other people from the gym. (Those are the Alpha dogs people are often complaining about.)

Speaking of the average fitness professional—the ones we frequently see with six-packs—part of the reason why they work so hard to stay so lean is because they do this for a living. People who compete in bikini and figure competitions train in the “off-season” to be ready to lose body fat in the “competing” season, because that’s how they earn their salary. If you compete in ten competitions across the country in 10 weeks, and win $5,000 in each competition, guess what? Not only have you earned a $50,000 salary in less than a summer’s time, you’ve also earned enough credibility to become a sponsored athlete and paid spokesperson for a fitness brand annnnnnnnd you’ve earned enough credibility to sell coaching and training services at anywhere from $150-$400 an hour.

Are you starting to understand why some people are incentivized to maintain that coveted six-pack?

Is it clear now that I think this might be one of the most difficult fitness goals to ever attempt? Not because it’s impossible—it’s obviously not—but because the average person isn’t going to receive anywhere near enough benefit to outweigh the cost of pursuing this particular goal. It’s hard to feel motivated because it’s a slow crawl, and because you rarely have the same pot of gold at the end of the rainbow, the “failure” to achieve it can leave you less-than-motivated.

My advice is to be very realistic about how much of your life may have to change to accommodate this kind of goal. I couldn’t even get closer to about 21% body fat before life threw me a loop, but I know how hard that hustle is. Don’t delude yourself. Everything has to be on the table to change. Pay close attention to your diet, slowly start to cut carbs and calories down, maintain that lifting routine, and stay 100% committed to your routine. Dr. Berardi has a great essay on what it took to get super-lean and stay that way, and you’ll likely find that it echoes a lot of what I’ve said here and then some. The author of that essay’s maintaining his leanness—I’m just trying to get back to where I was before, so his advice will be much more targeted. (And, as PN is where I was certified in nutrition, I obviously trust their insights.)

All in all, be patient. Be diligent. Be committed. And be willing to put everything on it.

Most importantly, be realistic. It’s okay to also be honest with yourself, and say “a regular ass flat tummy is enough.” That’s okay, too.

What You Need to Know About Bloating, and How to Stop and Fix It

thats so amazing im working out now im total ready for the new old me but i really wanna know how can you get this arms and stamch fat gone with out sit ups my back is little bad.what kinda of cardio can you do for starters.

I am not a woman but this is an amazing article that I share with women in the gym or slowly clawing their way to the gym in hopes of achieving their self-image of beauty. Not one word of this could be said better.