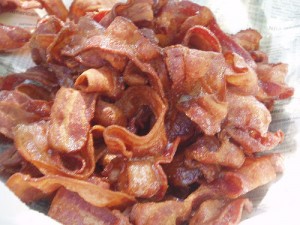 Since y’all insist on harassing me with bacon tragedy, I’m going to start pummeling y’all with it, too. Call it “Bacon Watch” or something.

A southeastern Pennsylvania woman is accused of beating her 9-year-old grandson and blasting him in the face with a garden hose because he ate too much bacon.

Clifton Heights police say the 63-year-old Kolynych was angry at her grandson because she believed he ate too much bacon at breakfast and didn’t leave enough for everyone else.

Police say Kolynych allegedly assaulted the boy, knocking him to the ground. Police say witnesses reported that the woman pinned him down, beat him on the legs and then sprayed him with the hose. He did not require medical attention.

Kolynych is being held on $25,000 bail. It was not clear if she had an attorney.[source]

You can thank Amber for the fact that you now know that bacon causes kids to catch this kind of ass-whipping.

Got a Weekend WTF? to share with the class? Send it on over to wtf@blackgirlsguidetoweightloss.com!

Weekend WTF: All Fried Everything

I love bacon, however I do not have that much love for any food that it require a beat down of a human. This is very very very sad. I can’t imagine being that angry that you ate too much bacon. I bet that child will never ever eat another piece of bacon.

#teamANTIbacon? How about #teamANTIabuse? This is less about bacon and her love for it and more about how horrible some people can be. I doubt the bacon was the only time she assaulted him, stuff like this usually doesn’t just happen.

I think Erika was being tongue in cheek there 🙂

Danielle, I know I said that in my second comment (I just didn’t find it funny) but it probably wasn’t up by then. 🙂 IDK, it’s hard to tell without timestamps because I didn’t see your comment here either.

I’m sorry but when i was growing up kids got whoopings all the time. If an adult told you not to do something and you did it anyway then chances are you got a whooping for it. Eating all the food and not leaving any for the rest of the family to eat would have definately got me in trouble…especially if the person going without was the same person who paid the bills. I’m not saying it’s right(especially not the garden hose), but it happened all the time. If they had the laws that they have now back in the day most of our parents would have been locked up for child abuse.

That’s great, but something being common doesn’t make it right. A lot of messed up things were common and overlooked in the past that would not be tolerated now. And in this article it doesn’t say he was told not to eat and it doesn’t say he ate all the food (even if those things happened, the response was out of control), just what she thought didn’t leave enough. Then again, you admit that what happened wasn’t right especially how out of control it got, so why compare it to a lesser situation (a whoopings is not the same as a beating)?

I’m mildly annoyed by “I wasn’t trying to get into a discussion about child abuse,” especially since that’s what appeared to be the point of both of your comments. You wanted to chastise me for not talking about the horrors of spraying a child with a hose over something like food… on a blog where I specifically talk about food… on a feature where I specifically talk about foolishness surrounding food… I let you. Sarcasm doesn’t always translate. I get it. Have at it. But please…. let’s keep it 100.

Actually, I said a discussion about “child abuse LAWS”, as in, I wasn’t trying to get into what the laws should or shouldn’t be (look at my first comment, it wasn’t about laws) which Rhonda started getting into talking about “now vs. then” and if it was okay or not. My second comment ended up being about that, and I pointed out that I didn’t want to get into that (or I would have done it in the first comment) but it ended up happening.

I wasn’t trying to “chastise” you with those two comments, trust me, if I was my comment would have been a lot different. I also didn’t expect you to use this site as a platform about child abuse, I know you talk about food that’s why I come to this site, I just disagreed with the “LOL bacon, amirite?” aspect even in tongue-in-cheek (as I stated before). You say it’s “foolishness surrounding food” and I said in my first comment that it’s less about the food or eating healthy. Hey, some people are able to read the article and focus on the aspect of food and I can’t. I disagree. It happens. You’re right, a lot of things don’t translate over text because I sure as hell didn’t expect you to come back “mildly annoyed” or thinking I was trying to “chastise” you. But whatever, chillaxing.

“I wasn’t trying to “chastise” you with those two comments, trust me, if I was my comment would have been a lot different.”

Hmm- I don’t know if it’s because you’re a mommy, but you get a ‘chastising’ tone sometimes Erika lol- I think it might be the lack of emoticons haha!

LOL I’m blaming it on mommyhood for now, lol.

@Rhonda- just because you got whoopings all the time doesn’t make it right baby and I say that with love. To relate it to food- just because my grandma cooked vegetables to death and had like 3 meats for Sunday lunches doesn’ make it okay.

On a side note- my family fries plantains however I don’t eat it any more since it’s fried and it soaks up the oil. (You slightly fry it, mash it then fry again, so you know it’s good and oily!).
I honestly had a problem giving it up, because it’s like that’s my heritage man!
But you know a ripe plaintain roasted is so good so it’s like I’m making my own ‘heritage’ now. So you know, it’s okay to change what you perceive to be ‘acceptable’.

Erika, I was thinking the same thing on all accounts while I read the article. First of all it is child abuse…getting a whooping vs. being hog tied, beat up, kicked and sprayed with a garden hose is freaking crazy and obsessive. It is way over the top. Especially over BACON. But I got your back on the content of the article and how it relates to your site. Your site is 100% devoted to helping us lead a healthier lifestyle. Sometimes you have to show the extreme and ridiculous in order to prove a point. I also realize through this journey and having lost 75 lbs myself that people ask for advice but most don’t really want it. They want you to say that you eat any and everything you want, that you don’t exercise, that you sleep in a magic cocoon and each week you lose 5-7 lbs. The cocoon can’t be expensive, or ugly and is customizable to fit all houses, apartments, body types, decorating styles, lifestyles. KEEP’em coming…

congrats on loosing 75 lbs!! I’ve lost 22 and seemed to have run out of steam ha! I’m maintaining right now.

Erika thank you for all the articles and information you provide. I find something useful in everything I read on your site.

As Katt Williams said “you angry at breakfast? You gangbanging on bacon?!”
This women’s crazy.