Weekend WTF: Weigh Over 350lbs? You Eat Free At The Heart Attack Grill 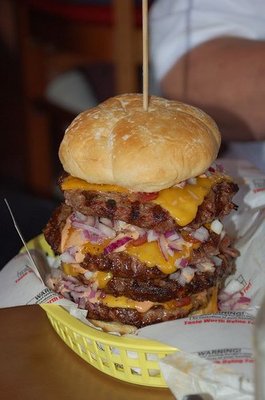 In Chandler, AZ, let’s talk about The Heart Attack Grill.

Complete with its own wikipedia page – which makes it kind of a big deal? – and a Yelp profile a mile-long, The Heart Attack Grill pulls no punches: the sign on the window says, plain as day: “This establishment is bad for your health!”

The entire restaurant carries a theme. The owner walks around with a stethoscope, the servers – apparently inspired by the Hooters’ girls, if not but a little bit – wear skimpy nurses’ uniforms, put hospital ID bracelets around your wrist and offer to wheel you out of the restaurant… in a wheelchair.

Offering up unlimited fries fried in pure lard, coke made with real sugar (oooooh, fancy – pardon me as I roll my eyes so hard I cannot type), a butterfat milkshake and burgers with names like the Single-, Double-, Triple- and Quadruple Bypass Burger, The Heart Attack Grill does what it can to live up to its motto: “taste worth dying for.”

Oh, and let’s not forget: if you think you weigh above 350lbs, you get to stand on a scale in the middle of the restaurant and have your weight checked. If you’re above that magic number? Guess what – you eat free. Every. Day. Every. Single. Day. And don’t think there aren’t people out there taking advantage of that perk. If you’ve seen this spot on Food Network or Travel Channel, you’ve seen the clips of people admitting as much.

Great gimmick, I guess. But what’s the food like? Apparently, there’s only the burgers and fries on the menu. And, I mean, we here at BGG2WL know that enough sugar, fat and salt can trick you into thinking anything tastes good, but what’s the flavor like? Is there any?

Considering the following comments via Yelp:

Nothing notable, exciting, or overwhelming.  It’s what you’d expect from a flat grill.

SOOO Disguesting… cool idea, but nasty, and the food does not even taste good. I felt sick after 1/2 of my burger and I would not let my daughter eat hers at all.

The food? Not good. Not too bad either. Oily. As in oil-slick oily. I was surprised I didn’t get a coronary.

Food – 3/10 – Take my word and other yelp comments the burger is nothing special.  The meat is very bland and has no memorable seasoning or sauce (yawn).  For a “burger” joint when calories are no concern you think it was the most amazing flavor ever.  It’s not.  Burger Guru’s go elsewhere.

Check out this video interview of “Dr. John,” the owner of The Grill.

Uh… I’m just gonna leave that at that.

I feel really disgusted by this- to have a catch phrase ‘taste worth dying over’ is sooooo callous.

But you know, this is what capitalism is about right?

your keyword “tragedy” says it all LOL! If I’m going to have a heart attack from the food can it at least have a little seasonings smh

Eight. Thousand. Calories. For something that loooks like it’ll give you a long, sleepless night of stomach pains and diarrhea…forget about the long term problems, like heart disease and diabetes. I’d actually be scared to eat there.

Also, the reviews say that the burgers aren’t that good. I’m gonna waste that many calories on something that isn’t THE MOST PHENOMENAL BURGER I’VE EVER TASTED?????? For 8,000 calories, that burger had better be the stuff dreams are made of. Seriously.

Sadly, their marketing is actually pretty good. It’s somewhat refreshing to see a restaurant that’s not claiming that their unhealthy food is actually healthy because of some BS reason. They’ve turned their honesty into a gimmick that seems to be pretty effective, especially for people that like to really indulge every once in a while. My concern is that this goes WAY past a simple indulgence. I’m a runner, so I always think of extra calories (i.e. dessert calories, indulgence calories, etc.) in terms of miles. 8,000 calories=a little more than 80 miles. NOT. WORTH. IT.

CO-SIGN. That much indulgence better be a true indulgence — as in something I can enjoy.

Sadly, I know a lot of folks who would see this as some sort of manhood challenge. “Only a MANLY MAN can endure this!” My friend’s husband is currently going through serious heart trouble as a result of having that attitude for years, and some guys he knows still give him shit about eating healthy.

Now that is the American way. Freedom of choice. Don’t hate on the Grill’s owners and the gimmick, he is just keeping it real. You have a choice not to eat that stuff. Would I make that choice? Now I would not but there was a time I would have which is why I am now fighting to lose the weight I gained and regain the health I compromised when I was young and stupid. Clean eating is a much better way to live hands down.

thanks for showing how even when this restaurant is reviewed solely on the “tastiness” of its food, it falls short in many people’s eyes. I see this place promoted a lot as part of “fat acceptance” and it makes me sad when it gets conflated with a movement to be healthy at any size.

I wanted to call your attention to an interesting article posted not to long ago in response to the death of the previous owner of Heart Attack Grill at the age of 29: http://www.huffingtonpost.com/john-robbins/being-fat-in-america_b_840994.html

My reason for posting the article is a look at the comments section. I could not believe what some people were saying when it was even SUGGESTED that eating more vegetables and other whole foods could reduce health risks. People who hadn’t even BEEN to the Heart Attack Grill were jumping to its defense in droves. It seemed to really push some buttons to even suggest the place was unhealthy – when the place even promotes itself as “worth dying for.”

Barf! 8,000 BLAND calories?!!?!?!?!!?!??!??!??!?!?!!?!? How can this be a celebrated restaurant?!??!!? It’s one thing to get fat from too many servings of untrimmed steaks, loaded baked potatoes and a well made, full fat cheesecake.(easily 2500 calories) Another thing entirely to go in on empty, bland calories. The very idea that the food is worth dying for is so sad. I wouldn’t trade my hungriest times for this greedy, fat filled, greasy fare any day.

The site of it makes my face twist up in a disgusted manner. All I could think was “What the hell is that?!” I mean I know what it is but I see things like this very rarely and each time, I cringe in disbelief. Ya know, I get so tired of people saying “Life is short. Why not be happy while I’m here?” That is the number one excuse I hear from people that have unhealthy eating habits. Every time I hear that, I think “Well if you’re so concerned about life being so short, then why no prolong it by eating better?” Human life expectancy is dwindling because of our eating habits. Just think, if we combine all of the great life saving technology that we have with better eating habits, we could all be around for quite awhile. So every time I hear that stupid excuse, I just roll my eyes. As for that burger…I mean do people really think that small of their lives that they curse their bodies with that junk? I know I sound judgmental. It just baffles me. I guess I may never understand.

Eww, just ewww. And who in the hell would admit to weighing that? Lord help them get healthy if they’re eating for free in there.