The 35-year-old chef Jamie Oliver caused quite a stir with an appearance on Letterman’s The Late Show, where for Letterman, Food Revolution may have new meaning. 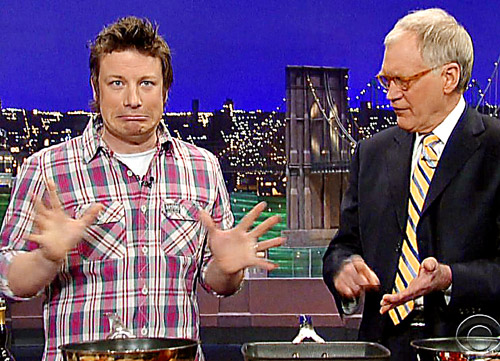 But wait, I’m not done. FriendsEat goes on to explain:

castoreum is removed from the beaver during the skinning period, and is dried in the sun, or sometimes over burning wood.

“The fresh pouch contains a yellowish, butter-like mass with a fetid, sharp, aromatic odor. The dried pouch is dark-brown, hard and resinous. Castoreum has a warm, animal-sweet odor, becoming more pleasant on dilution.”

Weekend WTF: Weigh Over 350lbs? You Eat Free At The Heart Attack Grill

Stupid Study: Why Black Women Are Fatter, Dumber, More Manly And Less Attractive Than Others

OK…. I am so done! That is so disgusting!

I read this expecting to see some evidence you dug up, proving that Jamie Oliver was wrong….well… This post definitely will keep me out of that ice cream my family loves to keep in the freezer. My favorite flavor too….I’m not even tempted.

Ugh. I just threw away my ice cream lol

This one really made me SICK to my stomach! I’ve been making my own ice cream using raw nuts or coconut milk, agave nectar, vanilla beans, & fresh fruits…No beaver crap here! ugh Thanks for informing us about these horrible things being added to our food.

C’mon guys, the key question, which is not being addressed is whether or not it is poisonous. If it is, then condemn away. If it isn’t, then surely disgusting is not equal to toxic? So many of our foods are taken from animal organs, glands and secretions. We don’t have to like them, but since this is a blog discussing nutrition and healthy living, shouldn’t we at least try to do more than scratch the surface?

I discuss nutrition and healthy living as it pertains to CLEAN EATING, because my personal belief is that this overrun collective of chemicals and their clandestine origins are part of the problem. And if highlighting the origin of some of this ridiculousness compels people to decide AGAINST consuming it, then that is their right. Some people draw the line at having their syrups and ice creams flavored by the anal secretions of skinned beavers. If you don’t? *shrug* Everyone’s threshold is different, and I’m not going to chastise someone for setting their threshold higher than the next person. (I wouldn’t even chastise someone for setting their threshold LOWER than MINE, unless they start ridiculing people whose thresholds are different from theirs, or insinuating something suspect.)

Obviously the chemical isn’t “poisonous” because it’s been deemed “generally recognized as safe” by our government. Shouldn’t we “at least try to do more than scratch the surface” or whether or not it can directly kill you? Isn’t THAT what my blog does? C’mon. Seriously.

Not that I’m not grossed out, but, really, I’m not sure it’s any less clean than eating the lactation secretions of cows. Like it or not, it’s still basically a natural animal product. Dried and diluted is not really that much processing. Most of the herbs we use in cooking are basically dried and, OK not diluted, but crushed, ground, or bruised.

Which is not to say I won’t still be making my own ice cream, but . . . yeah, the gross-out factor is high, but the chemical-additive argument is relatively weak. We’re hardly talking melamine here.

I have to say that, while I don’t doubt there are plenty of disgusting things added to seemingly simple and innocuous foods, I don’t entirely trust TV chefs to do exposés, either. Do we actually know how universal this additive is? Or is he playing it up for shock value because it’s so revolting?

“Like it or not, it’s still basically a natural animal product.”

I don’t know where I made the “chemical additive” argument here, beyond the fact that this IS an unnecessary chemical addition – and a gross one – when regular vanilla would suffice… as is usually the case with MOST chemical-additives. Don’t miss the point.

Well…..there you have it! Vanilla ice cream has officially been taken off my grocery list!

That’s another reason why I’m vegan and eat natural foods. People need to start going beyond “low fat” or “low calorie” foods, and check the ingredients in these foods.

Well I have never been a fan of cheap ice cream simply because it is full of air being over run and all but umm yea this just takes the cake.

I loved the first season of Food Revolution! I haven’t seen the 2nd season but I’ve heard he’s having a hard time getting cooperation.

have a lovely weekend!

Hey Erica, got a recipe for clean easy ice cream??

I think some of you are forgetting that Jamie mentioned castoreum was in “cheap” strawberry syrups and vanilla ice cream. So if you look at the ingredients in a quality vanilla ice cream, they usually show : cream, egg yolks, milk, sugar & vanilla. 5 ingredients. You add flavors and you get more ingredients, but nothing you couldn’t buy from the market yourself. I bought a gelato machine off craigslist 2 years ago and went gelato crazy for 3 months before I put it back in its box and on the gadget shelf. Ice cream isn’t that hard to make. And you’ll be able to indulge knowing only healthy natural ingredients went into it.

I guess this is why I’ve always hated ice cream.

As a newbie to clean eating, thank you for this…it helps to keep me on the right path.

that is uber-nasty, make your own ice cream if you need to. i’m guessing these are the nasty little ice cream cups with the wooden spoon on top that parents always bring to the preschools, lol

One more added reason no to touch the stuff and make my own. Anything else I need to know about that I can’t eat anymore? Let’s get it all out there on the table! lol