Now, around the world you may find the McLox (a salmon burger), Le Croque McDo (a toasted ham and cheese), the McHotDog, the spam/egg/cheese breakfast platter and the McCurry…. but right here, in America? 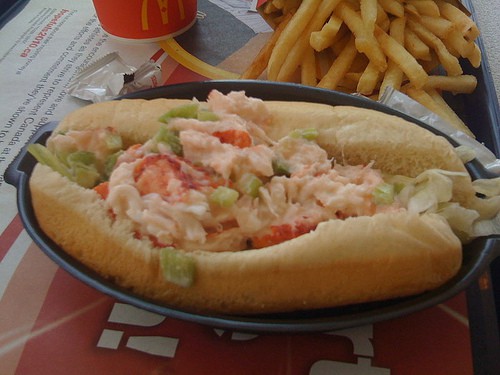 Originally, I thought it was a joke. McDonald’s isn’t exactly high brow enough to serve Lobster, now is it? I’d consider lobster to be a seafood delicacy. But I soon came to realize that it indeed was real and began shaking in my boots at the prospect of such a McFood.To be fair, the McLobster is hardly new. It’s been around for several years, but unless you live in Eastern Canada or New England, you might not be aware of the crustaceous cousin of the Filet-o-Fish. It comes and goes, much like the McRib, and the maritime treat basically represents McDonald’s take on the venerable lobster roll. The disturbing mix of lobster and bread is smothered in white “McLobster sauce”, which is some combination of mayonnaise, tartar sauce, and possibly some salad dressing. Shredded lettuce and bits of celery are also included.

And in case you’re wondering, it is real lobster meat in the sandwich. It’s actually not priced all that differently from typical lobster rolls, so don’t be too worried. Reports indicate that it’s a decent representation of the sandwich, so maybe you should go out and try a McLobster next time you’re in New England or the Maritime Provinces of Canada. And if you’re French-Canadian, be sure to ask for the McHomard instead. What’s the worst that can happen? Actually, scratch that last part, you probably don’t want to think about it too much. [source]

I don’t doubt that the sandwich contains real lobster. I just… question what else is in the sandwich. I mean, a McChicken ain’t even just chicken at McDonalds, so…. I’m sayin’.

Got a Weekend WTF?! to share with the class? E-mail it to wtf@blackgirlsguidetoweightloss.com!

If I hadn’t read this article I’d seriously think this was an April Fools joke. Eww, no thanks Mickey D’s, I will pass.

Yuk. I thought this was just a rumor.

I currently live in the Maritimes and have been well aware of the McLobster for quite some time now. I am a vegetarian but I do eat fish. Since I have not had McDonalds or fast food in YEARS I just had to try this out.

So as you can imagine… it is not tasty at all! So I suspect that it might be real lobster with a lot of sauce to try to spice it up (which it didnt). I also have not had white bread in ages so I found the bread to taste funny also.

All in all… a big thumbs down for taste. That was about 2 years ago now so I am just happy that I lived to tell the tale!

Lobster used to be a poverty food, and in some places it’s still dirt cheap it is technicaly an arachnid after all. In the maritimes if you ate lobster it wasn’t unusual to burry the shells rather than take the chance of anyone finding out. It is real lobster it is just very badly cooked and very badly prepared. The high price in store is because what is partially needed to ship lobster inland and keep them alive. The mc lobster is young lobster, which doesn’t taste as good nor is it as flavorful as older lobsters.