The Importance of Building A Home Workout Routine 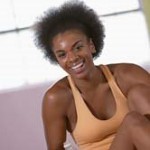 A big part of my ability to workout was stripping myself of excuses. I run a business. I don’t have time to get dressed, throw my hair back, go to the gym, and spend an hour. That’s like.. two hours worth of  time I could be spending on my business! I’m a single parent.. I can’t find a sitter for when I want to hit the gym!

I kind of had to develop a split personality, and beat myself at my own game. It sounds like I need psychiatric help, but it’s true in a sense. I needed to identify my own excuses, and start shattering them along the way so that I could begin to see my healthier self. I had to acknowledge, personally, that I was afraid to venture out into the world of working out because I was afraid to face the struggle that comes with it. I won’t lie.. I was also afraid to disappoint myself those weeks when the scale doesn’t move. To avoid the disappointment, I simply wouldn’t bother.

How awful does that sound?

I know not every woman will be able to identify with that, but I know some will. And even if that doesn’t define you, it may define someone you know. It’s important for you to understand this kind of mentality – not saying that it will always apply, but the self-defeating attitude that so many of us carry when it comes to weight loss and overall personal health? The difficulty of incorporating a routine in our lives that we might’ve never saw growing up? We might not’ve ever saw our friends partake? I had ONE friend in all my four years of college that worked out. It felt silly… why it might’ve felt silly? That’s a topic for another post, if you ask me.

Having realized my self-defeating attitude, I had to start slaughtering my excuses as they came. Can’t go to the gym? Fine. I’ll do a workout, or other work out at home. I don’t have to “get dressed.” I don’t have to “look-presentable-even-though-I’m-going-somewhere-to-go-get-sweaty.” I don’t have to waste time in the commute. I can get just as good of a workout in the comfort of my own home.

That’s the purpose behind this series. I’m hoping to post videos from the web that showcase awesome techniques for working out at home without a single machine, barbell, or bendy band thingy. I don’t have them, and I do pretty well. Besides, this is a recession and jobs are here today, gone tomorrow, unfortunately. We want to focus on the ability to be healthy without having to purchase something.

In short, the Home Workout Routine is the excuse killer. If you make it as easy as possible for you to jump into, there’s nothing stopping you from doing so! Enjoy the series!

At this point, I have a gym membership and have had one for the last few years on and off. However, I would like a strength trainging routine, i.e., arms, shoulders and back on M,W,F. Legs on T and Th. 40 minutes of cardio 5 days a week, etc. I would like to know which arm exercises I should do. How many reps of each? How many sets of each. I have had a personal trainer before and I did pretty well, but wasn’t eating right. Therefore, didn’t get the results that I should have for the money I was paying. Needless to say, it got very expensive. I would really like to learn to do this on my own…….with your help, of course.

I found your page through another website. This looks like just the information and motivation I’ve been looking for. Can’t wait to go on this journey with you.

So glad you posted this. This is my latest hurdle. With the colder weather I have had a harder time convincing myself to get out and go the gym. Water aerobics is still the best thing for me right now, but on a cold, rainy day, the last thing I want to do is get in a pool. I have been doing some of the workouts available On Demand, but I need to step up my game in that area.
I’m thinking maybe I should develop an in home routine.

Is this link okay Erika? It is a muscle directory and could be helpful in building workouts. Some of the exercises have to deal with machines but someone might still find it useful:
http://exrx.net/Lists/Directory.html

Also for those with an ipod touch:
My friend told me there is an app where you put in the equipment you have, the time you want to spend on the workout, and the muscles you want to focus on, and it spits out a workout routine for you!

You hit it dead on, Erika. I went through a very similar game playing routine with myself, one excuse after another, until I got tired of sounding like a broken record. What also helped me was having a workout buddy, I got tired of telling her why I didn’t workout again like I said you would.

I don’t have any kids but I can relate to this kind of thinking for sure. I had all those excuses but have decided I’m tired of hearing myself say what I was gonna do. I’ve started doing instead of saying more lately. What I have to do is prepare ahead of time. I set out my workout clothes the night before and write down what I’ll cook to eat for the next day.

Even though when I wake up that next morning and feel like staying in bed I go ahead and make myself get up and just do it.

Hi!
I blog about one of my favorite guilty pleasures — hot cocoa!
But, perhaps, too many indulgent cups of the stuff (among other issues, including a battle with breast cancer and water-weight gain attributed to continuing tamoxifen therapy) has me tipping the scales to a degree I’ve not seen in years.
But, I’m working on getting it all back together.
I’m slowly heading back to the gym, weaning myself back off the complex carbs and process stuff I’d allowed myself to enjoy while I was in treatment. This effort, in a nut shell, is how I came to BGG2WL!
Today, though, my question is what are your recommendations for skinny, but delicious hot cocoa.
Please share any recipes, that don’t include soy– a now, forbidden element in my diet.

I use almond milk to make my hot cocoa in place of regular milk. Try the recipe here but use Splenda instead. Also, add the Splenda last. So that it does not break down. I don’t add salt either to mine.

You can do air squats, push ups, sit ups, and burpees Tabata style. See here for an explanation of Tabata: http://tabatatraining.org/?p=18

That is the ONLY way I workout and that is at home. I have a plethora of DVDs. I got *smart* and started viewing dvds online for a preview at http://www.collagevideo.com and then going on Amazon and getting them used. My son , when he wanted to lose weight, we started doing GILAD together and then he did INSANITY and now does P90X and has lost 50 pounds. I lost my initial weight doing Leslie Sansone and the Jari Love Ripped Series….I am on a mission to lose more and I am so loving the Billy Blanks JR “Dance with Me” series and you can watch a whole workout on youtube. This is not Tae Bo, it is his son who has the BEST dance workout routine. I workout sometimes at 2 in the morning because everyone is sleep. It is the no excuses way to get fit!

I’m a person who doesnt feel comfortable in the gym, but need help with motivation. What cardio excercise can a full figure person do at home that will not hurt my joints ? Thank u

HI Maxi I am thirty five and have muscular dystrophy (MD). I have found the walk in home Dvds by Leslie Sansone wonderful. It ranges from one to five mile walks. I have build my endurance up to three miles now. Take it one day at a time. Commit to yourself to move your body ( temple) everyday. Hope this helps.

What a revealing, honest and encouraging article. This was just what I needed his early Saturday morning. Many thanks and blessings to you.

I have a question – I’ve been reading online about how lifting heavy is a cornerstone of a great fitness routine. However, I can’t really afford a gym membership.

Would body weight exercise be considered a substitute or are weight-bearing exercises the only way to get that effect?