Everybody, greet the radishes. 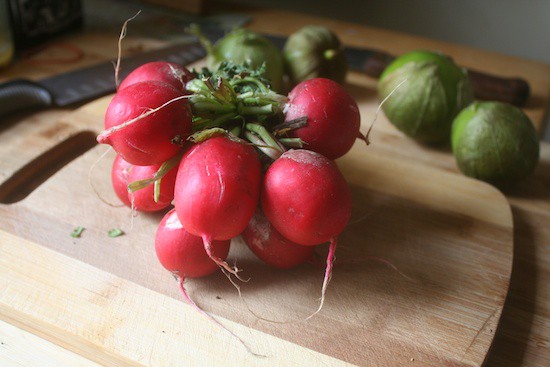 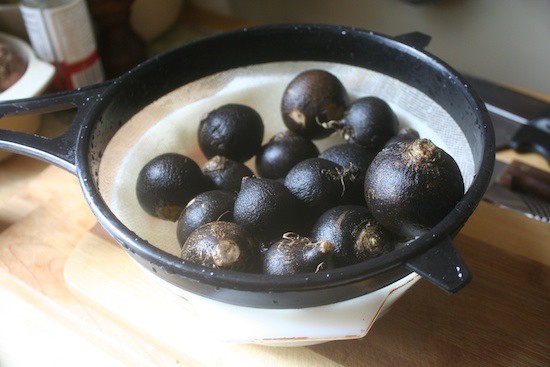 What is a radish and how does it taste? 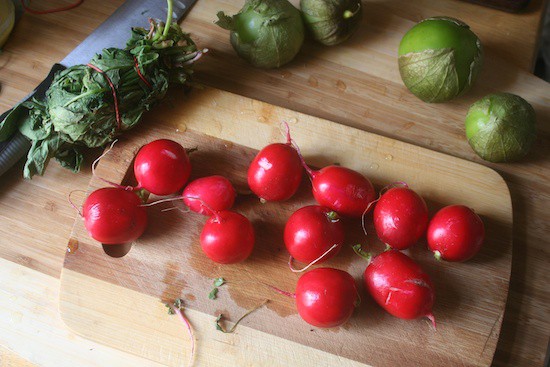 There are three popular variations of radishes – the bright cherry radish, pictured above; the black winter radish, also pictured; and the daikon radish (not pictured) – but the one most likely to be everywhere is the cherry radish, so that’s the one I’m going to delve into today.

Cherry radishes are spicy! You bite into it and, though it doesn’t hit you at first, it eventually makes you wonder what the hell you bit into. Granted, it’s not “cayenne pepper” spicy, but there is a tang to it that you wouldn’t expect from such a cute, tiny, magenta-ish veggie. It catches you off guard.

How do I choose good radishes? 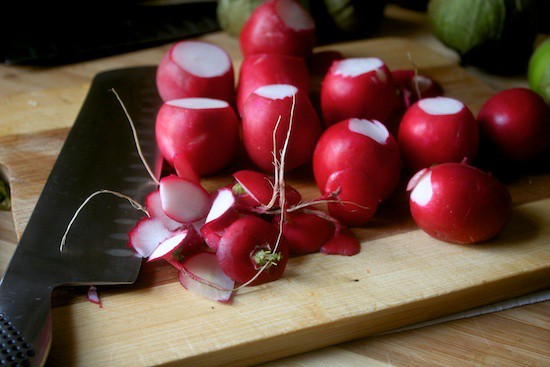 You want your radishes to be as firm as possible, with no splits, cracks or bursting seams. Because, however, it is painfully difficult to find a bunch that doesn’t have a single weak, split or damaged radish in the bunch, just do your best to find the healthiest bunch you can get your hands on. 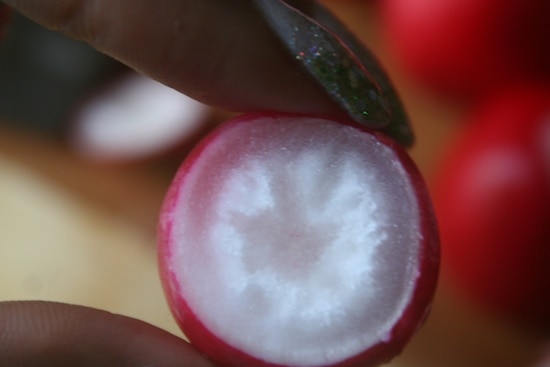 See this? That’s what a weak radish looks like. Terribly soft, feels more like clay than it does a vegetable. The inside is translucent. When it looks like that, don’t eat it. 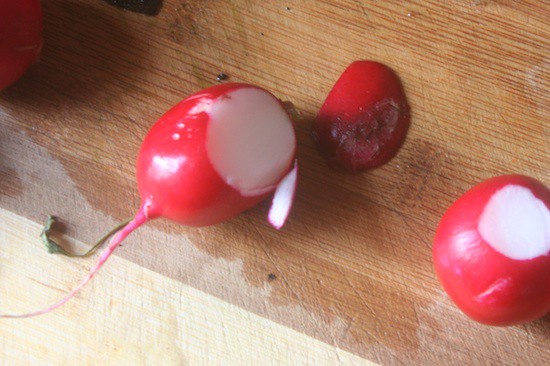 When you finally do begin cooking your radishes, you don’t have to throw out the ones with the weak parts; you can just cut those weak spots off. Test it – does that one part look softened, while the rest of the radish feels firm? Cut off the soggy part and see what it looks like inside. We’re cheap ’round here — if we can salvage parts of the veggie, well… that’s what we’re gonna do.

How do I store my radishes after I’ve bought them? 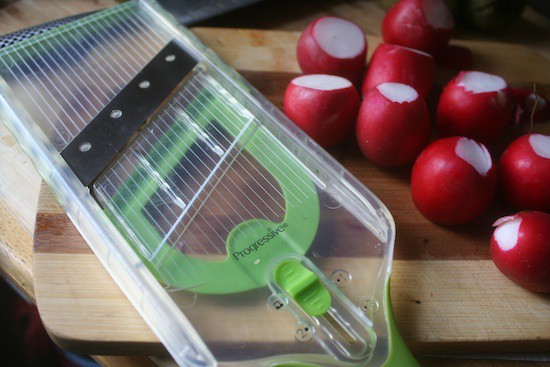 My cherry radishes and my mandoline!

Before you wash your radishes, you want to twist the radishes off from the bunch individually. It’s a really simple twist motion – take the head of radish and twist it at the point where it connects to the green tops. Here, you wash and cut off any soft or molded pieces. Keep your radishes in the fridge for no longer than 5 days.

What goes well with radishes? 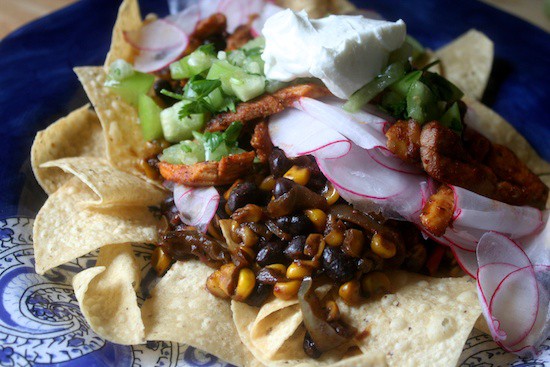 You often find radishes in kim chee, which is – in short – pickled… stuff.  Stir-fries, tacos, and any place where they can be enjoyed raw.

How do I cook the radishes I’ve bought for the Clean Eating Boot Camp? 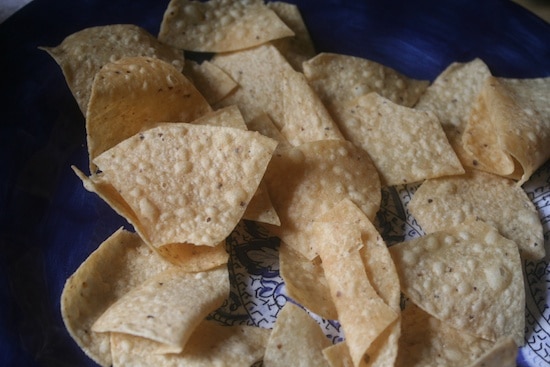 You’re also gonna need some organic corn (I always purchase my corn organic; if it’s not organic, it’s GMO 95% guaranteed.), some peppers and onions, and a can of black beans. Luckily, the veggies are available frozen for cheap (most major store brands have their own line of frozen foods, and don’t worry – they’re still great quality even if its not some big fancy brand), and the beans were on sale. Yay. 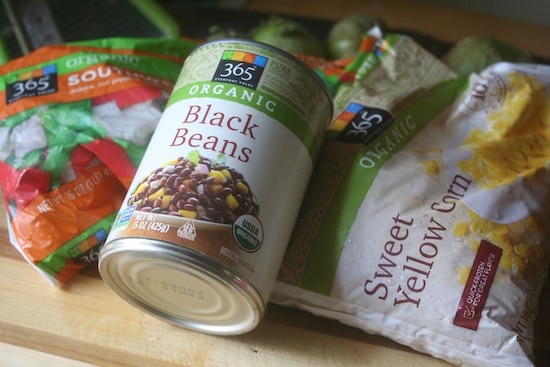 If you choose, you can also prep an additional protein. Because I’m greedy, of course I chose accordingly. 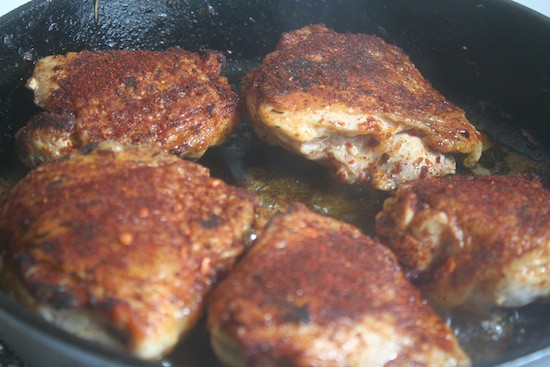 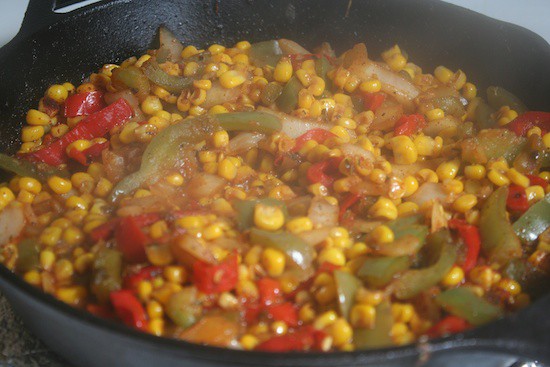 In a medium-sized skillet, add about a half-cup of water, and bring it to a boil. Pour in your frozen items – the frozen corn and the pepper blend – and add a pinch of salt, a teaspoon of smoked paprika (if you only have regular paprika, use only one teaspoon; do not use seasoning salt in its place), a tablespoon of dried oregano, and a teaspoon of cumin. 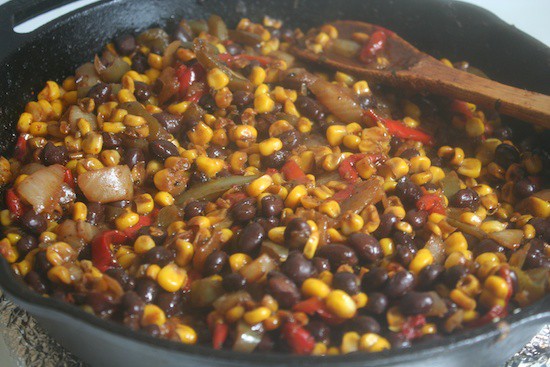 After everything is thoroughly cooked and no longer frozen, add your black beans, drained. Taste for flavor – not enough? Add more stuff, only a shake or two at a time. You’ve got to develop the palate for this stuff – figure out what makes you happy. Add about a third of a teaspoon of salt, and stir. Ta-da! Corn salsa. 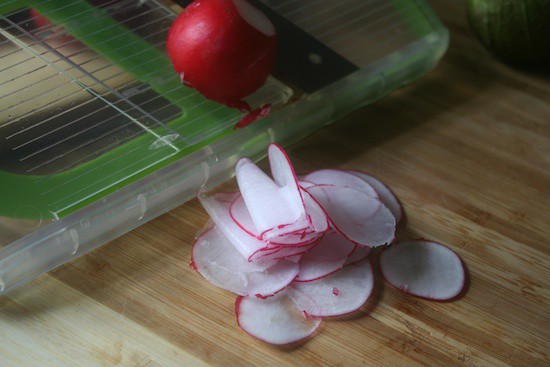 Take your radishes and, with a little inexpensive store-bought mandoline (or your very sharp knife), cut your radishes into slices. 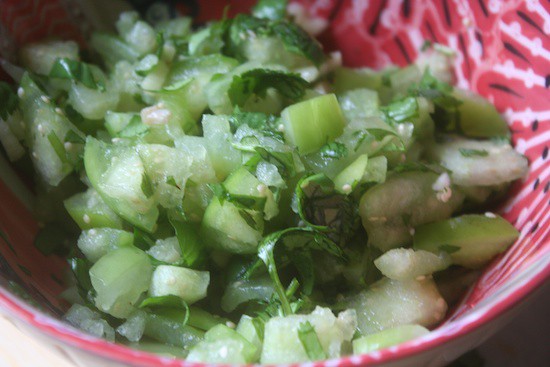 Chips. Corn salsa. Shaved radishes. Protein. (In my case, chicken.) Additional salsa – in my case, since tomatillos were on sale, I mixed four tomatillos with a handful of chopped cilantro and a half-teaspoon of minced garlic – approximately 1 clove. Dollop of greek yogurt.

From My Kitchen: The Ultimate Apple-Cranberry Pie

The Importance of Building A Home Workout Routine

wow you must have read my mind, I just bought some radishes the other day because a group I’m in challenge the members to try a new veggie and I pick the radish and I was wondering what I could eat it with, thanks for the tips.

I just bought some the other day. I’ve been slicing them and eating them in a cucumber, radish and roma tomato salad. Quite tasty.

I didn’t pick radishes but since i did try the other 2 im gonna try this one too. it looks good.

this looks really cool kinda of scared to try it but i will anyway!

That looks so good. What I am having problems with is reasonable and well made kitchen utensils.

I notice the food tastes better when it is prepared well. I am basically using a 12” knife for everything. What did you use to slice them evenly and thinly? Also I am looking for a great juicer and blender.

I used a mandoline! This one, to be exact.

Soo, I did my radish run today and I just washed, topped, and sliced 3 of them. They’re all translucent inside…but here’s the kicker…they weren’t soft. Please tell me I don’t have to throw half the bunch away already!

You can use them, but use them quickly. If they begin to soften, taste them and determine whether or not you can handle that taste, or if it’s time to toss.

If you don’t like the ‘bite’ of radishes, they’re amazing roasted. It tones them down to something more like a turnip.

I just toss them with salt and pepper and olive oil and roast them around 350F for about half an hour.

I love what you did with the radishes. I think of them as such a pungent veggie but I actually haven’t had much experience with them. Going to try this