As much as I’d like to say I’m surprised…. I’m not. The world’s largest fast food chain, and the most popular diet system…joining together NOW? No….nobody expected that at all…because that has never happened before:

Three McDonald’s meals, including Chicken McNuggets, carrying the Weight Watchers logo will be sold in the fast food chain in New Zealand from this week and will be introduced into Australia in the next few months. 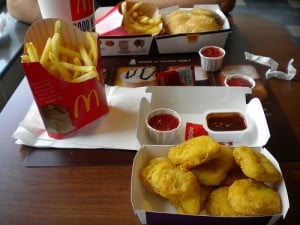 However, Chicken McNuggets with 485 calories for 10 pieces makes up almost a third of the number of calories the average woman should consume in a day, even when not on a diet. The NHS recommends women should consume 1,500 calories a day and men 2,000.

Weight Watchers now scores points for non-food, too? Awesome. I wonder how many points eating Play Doh would score me?

Comprehending Calories: The Role of Carbs In Your Diet

Weight Watchers has linked with a lot of food companies so that they can provide accurate point plus values to members. I think it will make members choose more wisely at the drive through. When they see the Big Mac has 19 pp and they will only have 10 pp left for the day. JMO I personally skip the drive through but if you, go it would be nice to know, instead of guessing.

Here’s hoping it teaches people to skip the drive thru – as you shared – altogether. I mean, really… yuck.

Realistically people are going to go to McDonalds sometimes. Although I rarely go except for coffee I remember going when my son was young. It will be helpful for members to know how many points certain items have. No McDonalds shouldn’t be promoted as healthy eating but WW is very good about incorporating “real world” issues into the world of weight loss and dieting. Of course they might want to promote a good cariologist along with that chicken nugget point count.

What caught my eye was the New Zeeland’s National Health Service’s caloric recommendations for men and women (2,000 and 1,500 respectively.)

The one I most often come across here in America (usually from the USDA) is 2,5oo for men and 2,000 for women. Ditto from the UK’s NIH.

That is what caught my eye also Linda! I’m so used to hearing 2000 is the normal calorie range for women, that when I was dieting I dropped down to 1400. I wonder which actually closer to being correct? 1500 or 2000 calories per day for women?

Can you explain more about the 200 lb woman eating 2000 calories? I weigh 221- I’m sure my body fat percentage is above 30% and I’m not calorie counting, but of course–I want to lose weight.

Well, maybe it will start people on the path from ‘look what I can eat!’ to ‘there are better choices, maybe I will keep this for special occasions’ to the best ‘I wouldn’t eat that shit if they paid me’ . Or at least make people start thinking of the fact that they can ‘spend’ their points on a lot more healthier choices and a LOT more food. Knowledge is power, so maybe it will backfire on McDo’s lol…well a girl can dream

This isn’t just WW giving points for McDs food. This is WW being prominently featured ON THE LABEL. HUGE difference. “This is OK – it’s got the WW logo on it!”

Like you I would like to say I’m surprised but I would be lying. I have never been a fan of Weight Watchers simply because I don’t think they give their clients the tools to succeed long term. I almost feel like it’s a one way relationship. Either way, I find this undermines their supposed intent to help people. It’s all about the money I guess.