Weekend WTF: News Flash – Doritos Are Good For You!!!

Well…. check out what the CEO of PepsiCo (who also manufacturers Doritos) had to say:

A CEO has an obligation to push her global company’s product.

But matter-of-factly stating on national television that “Doritos are not bad for you” is a bit of a stretch for on-the-job due diligence.

PepsiCo CEO Indra Nooyi told Fox Business Network’s American Icon program that the crunchy flavored chips are “nothing more than corn mashed up, fried up in oil, and flavored in the most delectable way.”

So… in the most hazardous bout of investigative reporting I’ve ever done in my entire life, I decided to sneak over to my local grocery store and…

…snap a photo of the back of a Doritos label. 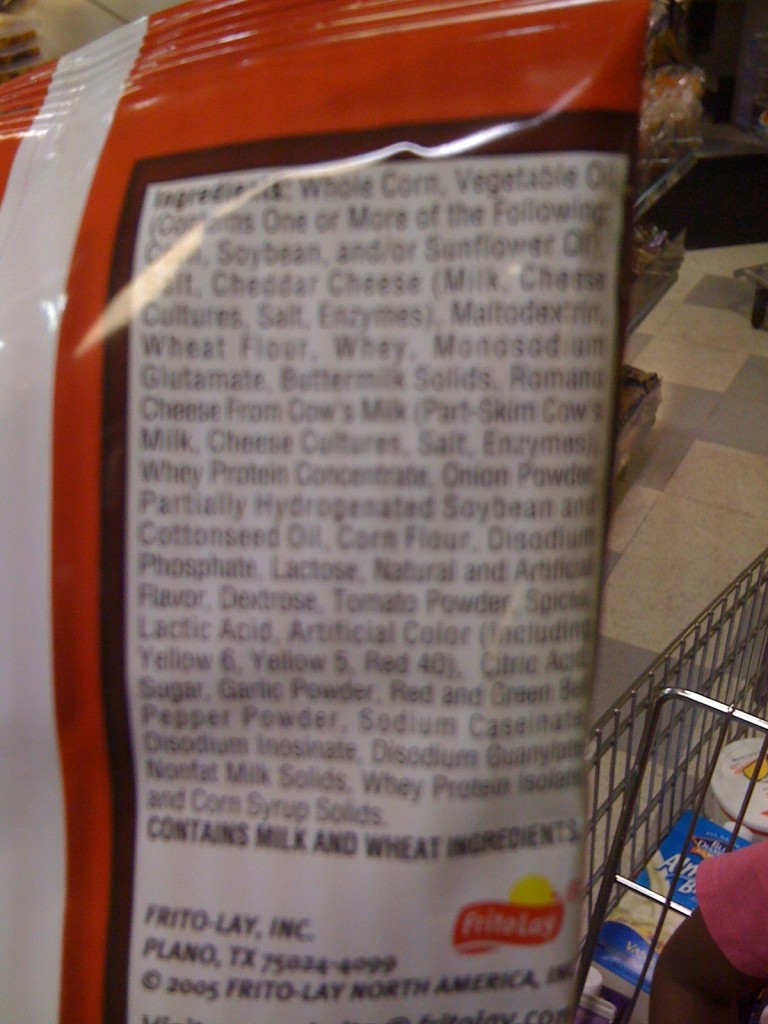 Um, I’m only going to highlight a few of these:

Maltodextrin – “A caloric sweetener and flavor enhancer made from rice, potatoes or, more commonly, cornstarch. Through treatment with enzymes and acids, it can be converted into a fiber and thickening agent. Like other sugars, maltodextrin has the potential to raise blood glucose and insulin levels.”

Monosodium glutamate (MSG) is a flavor enhancer commonly added to Chinese food, canned vegetables, soups and processed meats. Although the Food and Drug Administration (FDA) has classified MSG as a food ingredient that’s “generally recognized as safe,” the use of MSG remains controversial. For this reason, when MSG is added to food, the FDA requires that it be listed on the label.

MSG has been used as a food additive for decades. Over the years, the FDA has received many anecdotal reports of adverse reactions to foods containing MSG. These reactions — known as MSG symptom complex — include:

However, researchers have found no definitive evidence of a link between MSG and these symptoms. Researchers acknowledge, though, that a small percentage of people may have short-term reactions to MSG. Symptoms are usually mild and don’t require treatment. The only way to prevent a reaction is to avoid foods containing MSG. [source]

The word “natural” means a lot of things. Unfortunately for us, none of them mean the same thing. Clever marketing allows us to think that “natural” means the same as “organic” – pictures of farms, gardens, farmers and cows serve as the backdrop to a bright little starburst in the corner saying “All natural!” It makes you think “organic,” but it’s not. This is to the marketer’s benefit, because they get all the benefits of looking “organic” without all the hoops they’d have to jump through to be “organic.” For crying out loud, high fructose corn syrup can be considered “natural.”

Excerpted from Supermarket Swindle: Two Things To Avoid On Your Food Labels | A Black Girl’s Guide To Weight Loss

What is trans fat, you ask? Well, you might see it in your foods’ ingredient list as “partially hydrogenated vegetable oil” or “partially hydrogenated soybean oil.” It’s an oil (usually vegetable or soybean oil) that has hydrogen gas whipped into it, making it a thick and super creamy substance. This was a part of the original process used to create margarine, meant to replace butter because the saturated fats found in butter were considered so harmful. The trans fats that originated were an unintended consequence. Eventually, we found out that this “unintended consequence” was way more harmful than butter ever could be, leaving us exposed to heart disease.

The stuff can be found in lots of junk – margarine (of course), crackers, some thick and creamy items, and some inexpensive cakes/cookies/pastries. Anything with a thick, rich, buttery, creamy taste to it may more than likely have it.

Excerpted from Supermarket Swindle: Two Things To Avoid On Your Food Labels | A Black Girl’s Guide To Weight Loss

Tartrazine (also known as “FD&C Yellow Number 5” or “E-102” in Europe) is a coal-tar derivative that is used to color foods, cosmetics, and other products. It is literally industrial waste. I have a strong sensitivity to this substance, and believe there are many others out there as well who (perhaps unknowingly) have the same problem. If you get mysterious hives or sometimes wake up with swollen eyelids, this could be the culprit.

Tartrazine is also reputed to be a catalyst in hyperactivity/ADD, other behavioral problems, asthma, migranes, thyroid cancer, and lupus!

Have you noticed how many children are being diagnosed as “hyperactive” these days? There is research that shows there might be a link (and that dietary changes can help.) Many of the children on Ritalin or other behavioral drugs are probably just eating a diet rich in toxic food additives that are approved by the government as safe. Some schools have noticed a major difference in pupils’ behavior after banning snacks with tartrazine. [source]

It appears to cause allergic and/or intolerance reactions, particularly amongst those with an aspirin intolerance.

Not recommended for consumption by children.

…and that’s just with a cursory glance at that back label.

Anyone else think we should let companies tell us what is “healthy” for us? Or should we just go on and start sticking to what we know is best?

Got a Weekend WTF?! to share with the class? Send it to wtf@blackgirlsguidetoweightloss.com!

Weekend WTF: No Meat In Your Taco Bell Taco

Weekend WTF: Kraft Can Tell What You Want To Eat… By Scanning Your Face?

Sounds to me like someone’s bottom line is taking a hit by people finally taking notice to what they are eating. There is nothing healthy about a Dorito lol. Sadly there will be people that actually believe her.

I swear MSG is in EVERYTHING. I was shocked to find it it was in my beloved cream of mushroom soup years ago. Seeing the ingredients is definitely motivation to leave all of this crap alone.

Just last weekend, my niece and I were glancing through the “eat this, not that” restaurant book and I came upon a paragraph where they spoke about Doritos. The gist was a tortilla chip in it’s natural state is made of 3 ingredients and a Dorito is made of 36. I’ve been in awe of this for the last week. I can also tell you that since that day, every shopping I’ve done since then has been with a very critical eye (while reading the label and putting 90% of items back). It was an AHA (and scary) moment for sure. While I can’t say I’ll never eat another Dorito again, I can tell you it will be far far far and few in between when I do. Since I’ve gotten very serious about getting healthy and losing this harmful weight I’ve taken to asking myself “does my body really need this?” and it’s helpful.

Ok, I can’t buy that it’s some kind of marketing trick for people to think that natural=organic. Organic refers to foods raised/grown in a certain way. Most people know that plenty of natural food is raised with pesticides or unnatural fertilizers.

I don’t like insulting people but honestly, all I can think when I read that is that anyone who thinks “natural means organic” must be incredibly stupid.

The imagery coupled with the obfuscation of the meaning of the words…. yeah… I can see how people would make that mistake in a split second. It’s not about insulting people, it simply sounds more like a lack of understanding of how quickly people make these kinds of decisions when shopping.

This is why I don’teat chips, Doritos or anthing like that! Crazy ingredients… Can you imagine how many little kids stuff their faces with this every single day?

What else do people expect from Doritos?

I used to love to lick the flavoring off Doritos and put them back. Unfortunately, Doritos also has swine in it. So I haven’t licked one in many years