This might not be news to you, but it’s definitely news to me. I’m going to add this to the list of “Accidentally Vegan Meat-ish Products” that I’ve been compiling: 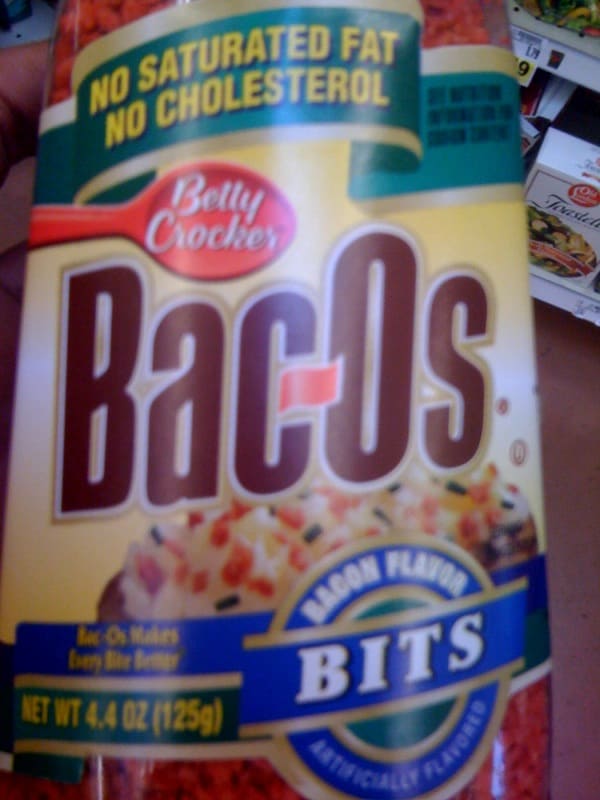 In preparing a recipe for a loved one, I realized that I’d need – ugh – bacon.

Resenting that I’d have to actually purchase a big gigantic batch of bacon for the little bit that I’d need, I was told to look in the salad aisle (?) for bacon bits. Since I live without pork on my fork, I’m not familiar with where pork is located in the store and decided to at least look to see what I could find.

I crept over to the aisle of the grocery store (big mistake) to see if there was something I could use, and I grabbed these bacon bit things. I checked the back of the label, only to see the following: 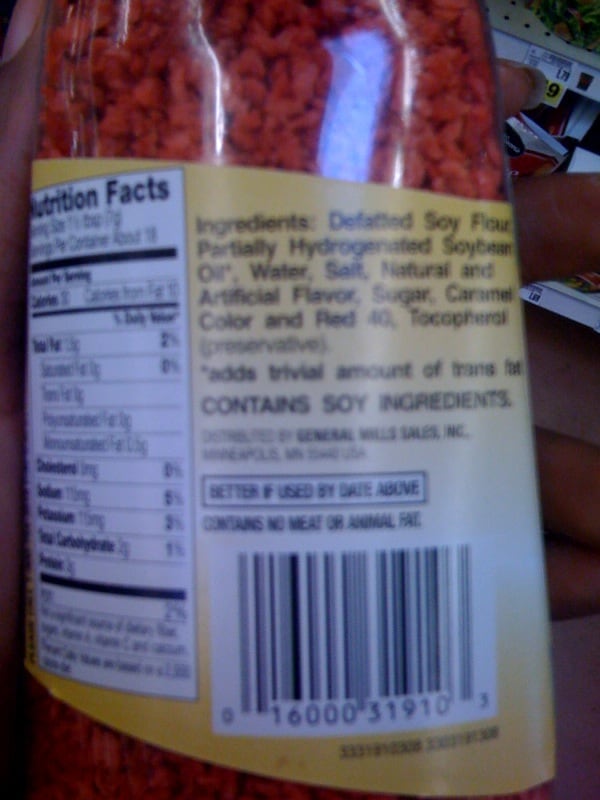 Sure, I’m annoyed by that “trivial amount” of trans fat (because, as I’ve mentioned before, “trivial amount”s add up)… but that’s not the biggest issue, here. Your bacon bits? Not a single drop of bacon in them! A second visit to the front label would confirm that for me:

My bad. They’re not bacon bits. They’re “bacon flavor bits”… “artificially flavored,” of course. No saturated fat, but trans fat. No cholesterol… because there’s no meat in them. Just soy and artificial bacon flavoring… that doesn’t really taste like bacon, if you think about it.

Someone- anyone – pleeeeeease tell me I’m not the last person on Earth to know that these didn’t actually have bacon in ’em!

im still trying to figure out what the other NON meat ( meats) are like Chickenless Chicken, and all that…it all just seems wierd to me.

Just like this – they’re all soy. Check the label next time you go to the grocery, take a photo of the ingredient list with your phone (?) and send it in! I’ll decode it for ya. 🙂

I have to be honest, I would’ve bought some real bacon (turkey). But this mess here, I would’ve guessed it was at least made with pig nose. Gross.

LOL When I’m cooking for others, I don’t play the “switcheroo” game – if they’re expecting pork in the dish, I won’t cheat them. I also won’t eat any of it, LOL!

Well since I thought I was the absolute last to know, finding out some time earlier this year…I’ll have to say…you’re last…LOL
But I was glad to find out although I hadn’t used them yet…

I realized that they didn’t have bacon in them long ago. They sure as hell don’t taste like bacon. You have definitely made me pay attention to labels and I thank you for that:)

This is defitely news to me. Eww. I remember growing up those Bacon bits were all the rage to put on your salads & baked potatoes. Gross! Luckily I’m not a bacon person anymore.

They actually have two versions, the artificially flavored and the REAL bacon bits and both say it on the front of the jar. I have been using the AF for years since I was raised in a vegetarian home. My uncle uses them to season his greens. They have been around for I know 20+ years since I am in my late 30s. The real bacon ones came out about 10+ years ago and they are both in the same aisle, at least they should be. O_O

LOL. I did know this. I haven’t eaten bacon in 14 years but I actually noticed this once when looking for salad ingredients for a salad for someone else….

LOL Erika, it’s so funny, I was raised not eating pork of any kind anywhere, so these were ALWAYS part of my diet- I still love them on eggs and baked potatoes 🙂

I didn’t know that! Huh. I don’t think we ever ate those in my house when I was growing up but I think I’ve had them at salad bars before. Blech.

At the Albertson’s that I shop at, they actually have bacon in the meat department, where you can buy it by the pound (or quarter pound, if you’re me). I’ve gone and bought a slice or two that I needed for a recipe. Saved me a TON of money, esp. since I wasn’t going to eat any more than I bought. You should check and see, should you need bacon in the future, if your local store carries it the same way.

You might be. When I went vegetarian in 2000, I went to Wendy’s between my jobs. I asked for the ceaser salad, forgetting that it came with bacon bits. When I went to return it the manager told me that it was imitation. I didn’t believe him so he brought out the bag. I’ve been all over it ever since.

I have a recipe for ‘facon’ if your interested.

@Serenity…facon recipe? I am intrigued. I try my best not to eat a lot of processed food (the shorter the ingredient list, the better), so having a recipe for these types of things would be awesome.

I have been a muslim my entire life and a vegetarian since 2006. Imagine my joy when I found out in the early 2000s that Bacon Bits contain no meat. I’ve only used them once in my life, because, I’m not really a bacon eater, but, I love just knowing that if I want to add them to my salad, I can. Enjoy!

Yeah, I was vegan for over a decade, and they’re known about all over the vegan community LOL. And my Jewish friends love them!

Another oddity in the food world that is usually accidentally vegetarian (not vegan though) is frozen Hawaiian pizzas from the supermarket. The meat on them is almost always soy. I’ve even come across “meat lovers” pizzas in the frozen section that were vegetarian!

I was raised Muslim (ala no pork) and my mom always put bacon bits in our salads. i knew they didn’t have real bacon in them cause we didnt eat pork. I love them.

when my husband was a vegan he used to put them on his salads. that seemed so odd to me. the first time he brought them home i was about to throw a shit fit and call him all manner of hypocrite…. then he showed me the label… yeah- it’s kind of nuts

Well. I certainly found out about them early, but on accident. My friends at school were absolutely raving (as much as little kids could) about bacon bits on their everything (and how the school didn’t offer them), and I had never heard of this thing so I asked at home. And I found out it was considered a salad staple. Being what, six? I had to have it. Because bacon was amazing. Eventually my mother gave into my nagging and got the cheapest thing on the shelf. We took it home, put it on my salad, and I spat it out and looked at her with the most horrified/offended look that she had ever seen. I was so ticked because it wasn’t bacon. It did not taste like bacon, it did not smell like bacon, it barely looked like bacon. Not that my mother knew any better, she’d never purchased the stuff before then. This was the mid-ish 90s, and I haven’t touched bacon bits since then (yeah, it was that traumatic of an experience for little me – eating what was essentially red paper…).

Later I found out that those friends hated real-bacon bacon bits (or at least said they did, though they apparently liked real bacon) and would only eat the fake ones. It was just what their palates had been raised on. I also more recently found out that at least one of them hats real crab meat but would eat the fake stuff any day of the week, as well as many, many other things (like…no fresh veggies, all canned, if any…seriously). She won’t even try some real foods because they’re so foreign to her.