This, sent into me by @moAKAnique…. is just great.

I’d seen this over the summer – because it came with a little bit of controversy – but I don’t think we’ve seen the last of it. 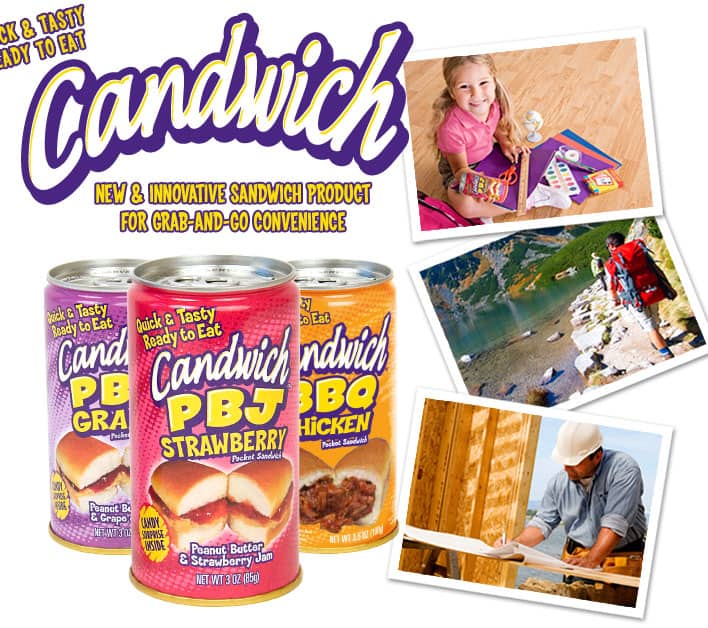 To quote the NY Times:

Is putting a sandwich in a can and calling it a “Candwich” the next can’t-miss billion-dollar idea?

Even if it is, investors in Utah who put $145 million in the hands of a money manager named Travis L. Wright will still have thinner wallets. A lawsuit by the federal Securities and Exchange Commission says that Mr. Wright promised returns of up to 24 percent on real estate investments, but that he put the money instead into Candwich development and other equally untried ideas.
[…]Meanwhile, the Candwich concept perseveres. The president of Mark One Foods, Mark Kirkland, who said he patented the idea of putting solid food in a beverage container with the slogan, “Quick & Tasty, Ready to Eat,” said Mr. Wright promised full financial backing for Candwich production that never really materialized even as investors did. He said he believed that canned sandwiches would ultimately sell, and hoped to go into production later this year.

The shelf life of a Candwich is excellent, Mr. Kirkland said.

So… even in the midst of all that drama, will the Candwich materialize and appear in our grocery stores? My gosh, I hope not. Mark One Foods, however, is planning a French Toast and Pepperoni Pizza flavor for its Candwich… so we’ll have to see.

Or not. Preferably not. My gosh, I really hope not.

Oh, and don’t forget to send in your Weekend WTF?! submissions to wtf@blackgirlsguidetoweightloss.com!

I can’t even understand how this would work, but I try not to be gross…

I knew clicking on this link, would invoke some form of queasiness – just by the name alone, lol. Ugh!

Candwich? First chicken in a can and now this???!!!! My stomach is hurting after looking at the photo. The sad part is that we all know SOMEBODY is going to buy it. UGH!

On a sidenote, I went grocery shopping today and checked all of my food labels. I pay more attention to sodium count than I do calories. It’s disgusting how much sodium is in a pack of Ramen noodles (over 700). I will be cooking a lot more often now:)

Quick note: A pack of ramen is 2 servings… not one.

I am assuming that the main target for this product is children. I only hope that parents will not buy this ‘ridiculousness’ for their children. Mark Kirkland says in the article that the product had an excellent shelf life. I have to give that comment a serious side-eye! Can you imagine the amount of preservatives/additives in this product. smh.

Are these like military “Sea Rations” (aka military packaged food that doesn’t go bad)?

LMAO! I firmly believe sea rations are MUCH worse. LOLOL

I’m either confused or slow…sandwich in a can? Sooooooo it’s liquid PB&J & BBQ Chicken?

Officially no longer clicking on the weekend WTFs…first the chicken, now this. Bad taste in my mouth. I do however believe that if these ever made it to market, they’d be placed exactly 3 ft from floor level so that all the cool kids could make them popular. Yuck yuck yuck.

I was through when I read, “innovative sandwich PRODUCT…” SMH…

This is crazy! How hard is it to simply make a damn sandwich?! arrghh.