The [Extremely Thorough and Rather Compelling] Case Against Sugar

I’m surprised that I’ve never written about this video before, but it’s always better late than never.

Dr. Lustig is a childhood obesity expert… and recently, the NY Times posted a write-up about his presentation – a lecture given a few years back that has garnered almost a million views – to further detail what makes his argument so compelling.

Now, I’ve seen the video several times – believe it or not, I actually have it on DVD and watch it regularly to remind myself – so I’m very familiar with what he’s talking about, here. Of particular interest to me – and should be of extreme interest to those of us with type 2 diabetes – is where, at a little past an hour in, Dr. Lustig talks about the reversal of type 2 diabetes. Not living with diabetes, but reversing the condition.

Who, out there, has a doctor who explained that process to them? 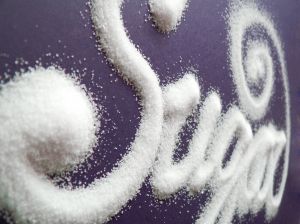 Earlier this month, Gary Taubes – writer of “What If It’s All A Big Fat Lie?” as well as the book Good Calories, Bad Calories: Fats, Carbs, and the Controversial Science of Diet and Health – penned the aforementioned article, which doesn’t surprise me in the least. Taubes is a relatively predictible source of anti-carbohydrate lifestyling and has, if I’m not mistaken, written a book titled Why We Get Fat: And What to Do About It as well as proclaimed his alliance with Team Atkins. I’m simply not surprised to see his name in the byline.

That being said, the question that Taubes’ article asks in the title – is sugar toxic? – is one that I can easily respond to with a resounding YES. Before I get to that, there are a few parts of Taubes’ article that I’d like to highlight, for those of you who’ll see the fact that Taubes’ article is 9-some-odd pages long and decide to turn away from it… like I almost did.

This development is recent and borders on humorous. In the early 1980s, high-fructose corn syrup replaced sugar in sodas and other products in part because refined sugar then had the reputation as a generally noxious nutrient. (“Villain in Disguise?” asked a headline in this paper in 1977, before answering in the affirmative.) High-fructose corn syrup was portrayed by the food industry as a healthful alternative, and that’s how the public perceived it. It was also cheaper than sugar, which didn’t hurt its commercial prospects. Now the tide is rolling the other way, and refined sugar is making a commercial comeback as the supposedly healthful alternative to this noxious corn-syrup stuff. “Industry after industry is replacing their product with sucrose and advertising it as such — ‘No High-Fructose Corn Syrup,’ ” Nestle notes.

Please keep this in mind the next time you watch TV and see a stupid soft drink or juice commercial saying “We use real sugar!” in it. It’s a brand-new day when table sugar is lauded as a “healthy alternative.” Seriously.

The conventional wisdom has long been that the worst that can be said about sugars of any kind is that they cause tooth decay and represent “empty calories” that we eat in excess because they taste so good.By this logic, sugar-sweetened beverages (or H.F.C.S.-sweetened beverages, as the Sugar Association prefers they are called) are bad for us not because there’s anything particularly toxic about the sugar they contain but just because people consume too many of them.

Those organizations that now advise us to cut down on our sugar consumption — the Department of Agriculture, for instance, in its recent Dietary Guidelines for Americans, or the American Heart Association in guidelines released in September 2009 (of which Lustig was a co-author) — do so for this reason. Refined sugar and H.F.C.S. don’t come with any protein, vitamins, minerals, antioxidants or fiber, and so they either displace other more nutritious elements of our diet or are eaten over and above what we need to sustain our weight, and this is why we get fatter.

Lustig’s argument, however, is not about the consumption of empty calories — and biochemists have made the same case previously, though not so publicly. It is that sugar has unique characteristics, specifically in the way the human body metabolizes the fructose in it, that may make it singularly harmful, at least if consumed in sufficient quantities.

The phrase Lustig uses when he describes this concept is “isocaloric but not isometabolic.” This means we can eat 100 calories of glucose (from a potato or bread or other starch) or 100 calories of sugar (half glucose and half fructose), and they will be metabolized differently and have a different effect on the body. The calories are the same, but the metabolic consequences are quite different.

This should sound familiar.

The fructose component of sugar and H.F.C.S. is metabolized primarily by the liver, while the glucose from sugar and starches is metabolized by every cell in the body. Consuming sugar (fructose and glucose) means more work for the liver than if you consumed the same number of calories of starch (glucose). And if you take that sugar in liquid form — soda or fruit juices — the