Home What Are You Eating? Do You Eat ‘Chitlins?’ No? Well…Do You Eat Hot Dogs?

Do You Eat ‘Chitlins?’ No? Well…Do You Eat Hot Dogs?

If you eat hot dogs, you probably eat “chitlins,” my dear.

Don’t get me wrong. I don’t eat hot dogs. I also eat neither beef nor pork. Not for any particular reason, I just – quite frankly – can’t afford it. 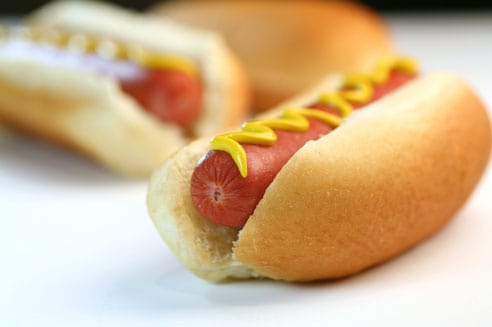 You know all of what I know about food, and then you inevitably wind up having the conversation about how it’s so shameful that Black people eat chitlins and pigs feet…while they’re eating a hot dog… or, even better, a deli meat sandwich… and you somehow magically stop breathing out of sheer shock.

I ask people this question all the time… where do you think hot dogs, loaves of deli meat, bologna and spam come from? That’s not a “chicken breast” hot dog you’re buying, at a price of $0.99 for a pack of 8, when a pound of chicken breast [that has had nothing done to it except being cut off the bird] is still $6 a pound. It’s just not. There’s no sirloin in your beef hot dogs and, even if there was, I’m willing to bet it’s got various other parts in there, as well. You’re eating the tongue, the intestines (that’s what chitlins – also known as ‘chitterlings’ – are), alladat.

And, considering the scandal in Europe right now, exposing the loopholes in ground meat containing hourse out there… no one should expect any sanctity of their processed meats in the US, where we have considerably less consumer protections.

So…what are YOU having for lunch?

To Hell With Leaning In… I’m Looking Up

This is why I buy kosher ones, and that’s rare.

I don’t know what it’s like elsewhere, but chicken is only $3/lb. for breasts out here in lovely freezing cold Iowa. If you buy a whole chicken and roast it yourself(actually roast, not burn, lol), then it’s only 99 cents per pound. In the case of pork, porkchops are cheaper than chicken breasts right now, so I sometimes get those, but only whole meat from the butcher, not processed. I think butterfly chops are running about $2.50/lb.
It’s funny, but I quit eating hot dogs in my teens because I thought they were disgusting, and I’d never seen any of these videos or heard any horror stories. They just didn’t taste right. Now I know why. The process described above looks like the way they make dog food, ugh.

I eat chitlins about once a year.
But I eat ONLY the Hebrew National hot dogs. They’re always (only) all beef made from particular parts of the cow. This is a bonus.
I really them only because they are the MOST delicious!

I am vegetarian and do not consume any flesh. Every time I watch a documentary on the meat industry it just disgust me even more. When i was younger my parents never served me franks, they said it was not real food. All the times I visited friends the parents hated me because I would not eat kids food such as vienna sausages, franks, nuggets,burger or french fries. They told me I had something wrong with me because I liked vegetables and that vegetable were only for the adults. On another note all they serve is franks and other nasty things in the school cafeteria. This is not food.

I so agree, Kami. As I child, I shunned hot dots at parties. I remember not liking processed meats (bologna, hot dogs). I asked my mom when I was about 3 where did meat come from. She answered me in an appropriate-for-a-3-year-old way, and I remembered asking if we could just wait for the animal to die before eating them. I was born to be veg 🙂

Had 2 slices of cheese pizza. I can’t afford beef or pork either. I’m at the point that I’m considering starting a farm so I can have the meat on hand.

Funny you should say that, because I was just sharing with someone how I had run into financial difficulty and went to a couple of food banks. To my surprise, they were out of food and were giving out bread. I was thinking that these people need food to give out, and farming is not a bad idea, especially here in the inner city where there is just land wasting away. Inner city farms could not only feed the community, but give jobs to a few folks too. I might just have to take that to my city council.

I don’t necessarily have issue with the mashed up bits of cow; I have no problem with tongue and ate it as a child. I eat chicken liver often. My bigger issue is with the chemicals that are put into the chitlins to process and flavour them.

I have to admit, I get really unwell in the US when I eat the processed food, as compared to other countries, because the chemicals used are almost a free-for-all.

Doesn’t that make you sick viewing the 1st pic??
Processed food is going to kill us all if we don’t change our habits.
Great post to remind us what we will actually put in our bodies evey day.
Thank you!

I was reading an article years ago about how they make Slim Jims. One of the ingredients is cattle forehead!

Oh Erika – you are putting me on BLAST with this post. The same girl that turns up her nose has to take a different look at those hotdogs…and deli meat. Ew.

Okay I’m done. As much as I love a good hot dog um I’m going to have to let these go. Maybe I’ll look into the Hewbrew national or just sausages from the butcher. Uuuuugggg. Thankfully I don’t eat them that much and haven’t had one in over a year or two.

I had a ham wrap for lunch. I don’t turn my nose up at the idea of chitterlings, but I do at the smell of them. After reading the posts on this site I know to keep my trap shut about any food that I cannot immediately envision as part of a plant or animal. But for the record I don’t eat hot dogs, deli loaves, or chitlins for taste reasons. I do like some sausages–I’m cool with random animal parts, but I am concerned about strange processing.

This made my stomach hurt.

Hebrew National was just sued for not having kosher meat. Hmmmm.

The suit had no merit and was dismissed.

The lawsuit was dismissed because “kosher” status is determined by orthodox rabbis and it is beyond the scope of the court to challenge what is essentially a religious judgment.

I didn’t know chitlins were associated with Southern blacks in particular until a few years ago. I just thought it was a more general southern thing, like fried chicken livers and boiled peanuts.

I don’t eat pork, but if I did I probably wouldn’t care what part of the animal it came from as long as it was safe to eat and tasted good.

Why lord Jesus? Why? I haven’t had a hot dog in 6 months or so,but i use to like them and indulge in them whenever i pleased,I am just horrified at the thing i willingly swallowed and put inside my body…. Shame.

OMG!!!!! I havent really had hot dogs in months right now. Yea I am done. I cant do chitlins or whatever they are called, after that photo of the pig’s anus………….i am good.