First, it was Burger King:

Burger King has acknowledged this week that some of its burgers in Britain and Ireland included horsemeat, the latest development in an ongoing scandal. 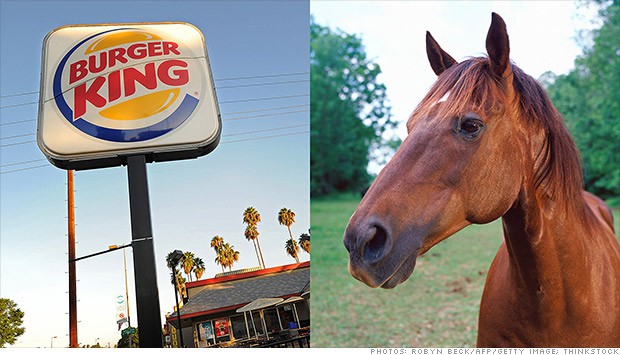 Horsemeat actually contains just as much protein and far less fat than beef, according to nutritionists.

Burger King says it found trace levels of horse DNA in four samples from its Irish meat supplier, Silvercrest, but “this product was never sold to our restaurants,” the company said in a statement. Nevertheless, Burger King’s admission has prompted a Twitter campaign and threats of a boycott.

The horsemeat controversy is Britain’s worst food scandal since mad cow disease in the 1990s. But this time around, the potential danger isn’t to Britons’ physical health, but their emotional well-being.

For as long as a year, British consumers who thought they were buying beef products may have been unknowingly eating pork and horse, as well.

Irish food safety officials broke the news in mid-January, when they said 23 out of 27 beef burgers sampled were found to contain pig DNA, and 10 also contained horse DNA. The meat had been marketed across the British Isles.

Then, it was Nestle:

First centered on Britain and Ireland, the scandal over beef products adulterated with horse meat escalated across Continental Europe on Tuesday after Nestlé, one of the world’s best-known food companies, said it was removing pasta meals from store shelves in Italy and Spain.

Nestlé, which is based in Switzerland, said it had increased testing after the discoveries of horse meat in British foods and “traces” of horse DNA in two products made with beef supplied by a German company, H. J. Schypke.

The involvement of Nestlé is a significant act in a fast-moving situation that is forcing Europeans to question the contents of their meals.

Before the announcement, the horse meat crisis had already spread, with perhaps a dozen countries caught up in product recalls.

Nestlé said it was confident that products in the American market were unaffected. [source]

Furniture retailer Ikea says it has halted all sales of meat balls in Sweden after Czech authorities detected horse meat in frozen meatballs that were labeled as beef and pork.

Ikea’s Swedish branch said on its Facebook page Monday that it won’t sell or serve any meatballs at its stores in Sweden out of concern for “potential worries among our customers.”

It said its own controls had not shown any traces of horse meat.

It wasn’t immediately clear whether Ikea would also stop selling meatballs in other countries. [source]

Now, listen. I may draw my own lines in the sand about what I am and am not willing to eat… and I don’t begrudge people the right to do the same. If you want to partake of the horse, then… hey. YOLO.

There are, however, a few problems, here.

I totally get it -there are people out there that cannot afford to care about where the meat comes from, and just want a meal. Ikea’s prices for food are mad cheap, and it should be expected that they’re cutting costs somehow to cater to those very people who want the food mad cheap. Honestly, if you’re spending all your dough wandering around Ikea and finally realize you’ve spent 4 hours there and are starving, then spending as little as possible on a giant meal may sound good to you. I totally get that.

But, does this not qualify as “taking advantage of people,” by serving them a meal of indiscriminate meat and not even ponying up on the info? (Sorry. Couldn’t help myself.) If you’re going to serve me a patty of partially-horse meat, shouldn’t you have to be honest and upfront with me about the fact that it’s horse, and let me decide whether I want to eat that? And, if you know it’d be received poorly by the public, don’t you think that’s a sign that you shouldn’t sell it, not that you should sell it and hope you get away with lying about it?

The Nestle article is the most hilarious, though. The entire article basically reads like a nervous Nestle PR agent wringing its hands about how the American media would perceive what’s going on with their food in Europe. The following can be found within:

“Nestlé U.S.A. does not use meat sourced from Europe,” a company statement said. “Additionally, U.S.D.A. meat inspectors are in all processing plants and also have responsibility to oversee any imported meat. We have also requested and received confirmation from all our meat suppliers that they do not provide Nestlé U.S.A. with any meat from the affected countries and companies.”

Since when are USDAs in processing plants in perpetuity? Here’s a nasty reality: USDA inspectors aren’t inspecting anything anywhere near as often as manufacturers would like you to believe. They’re not. The USDA has been so underfunded – something that companies like Nestle have worked hard to ensure – that there’s no possible way to inspect them all, especially on an ongoing and continuous basis. Not only that, but DNA testing is costly; do we truly expect corporations hell bent on selling their products as cheaply as possible to regularly pay for that?

I most certainly don’t.

What is my point? Simple. While this happened across the pond, and all the companies involved have assured us that we have nothing to worry about here… there’s nothing to stop this from happening in the US.

What Does A Success Story Look Like To You?

As someone from the UK I do agree with you, the horse meat was also found in ready made food and in cheap meat. Its quite interesting in that the real damage is the trust between consumers and companies. Especially when you check the ingredient list and it says 100 percent beef and it comes from reputable companies. It shows that we have in some areas overlooked quality over convenience and price.

The only real problem here seems to be that no one SAID there was horsemeat in the supply. I bet if it was put out there in a little specialty section it’d take off running.

…there really is no way to get around the puns.

I have no issue with eating horse. But I do have an issue with not telling people they’re eating horse. It makes me wonder how long they knew about this and what else these big companies may not be telling us…

I guess I will be working towards not eating burgers anymore. I don’t feel that I can trust the food industry.

The real problem here is that since the horse meat was not subject to any of the checks and balances all the other meat is subject to.

Now since we know quality of beef, chicken e.t.c. is poor even with checks and balances… What are we to presume of the horse meat which aren’t subject to any checks at all.

This is a product not cleared for human consumption at all. Does the meat come from old retired race horses routinely pumped full of steroids, hormones and all sorts? who knows….