Home The Op-Eds Pleasure and The Puritans: Why “If It Tastes Good, It MUST Be Bad” Is Wrong

Pleasure and The Puritans: Why “If It Tastes Good, It MUST Be Bad” Is Wrong 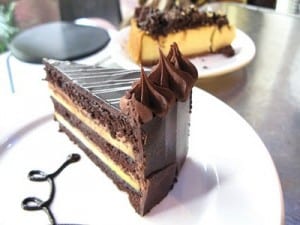 Everywhere I turn, there are people who are talking about food. And, I mean, that makes sense. It’s what we need to survive. However…. the conversations are more indicative of a fear of food than anything else.

Think about it – how often are conversations about pleasureful foods followed up with “Oh, I’m gonna spend all night on the treadmill for that one?” or “It’s going to go straight to my thighs?” I mean, this inordinate amount of guilt that we feel because we actually enjoy what we eat is so… bizarre to me, now.

From the nourishing revolution:

Basically, I’ve been thinking about the way people often talk and think about food as ‘good’ or ‘bad’ – as though there’s an implicit moral value judgement.  I think this is left over from the religious roots of Western culture, there’s something absurdly puritanical about the idea that what is good is hard work and not particularly enjoyable (healthy food), whereas anything pleasurable, a sweet, fatty indulgence for example, must somehow be sinful.  Perhaps this partially explains the promotion of bland foods like grains and the public execution of saturated fat.

This is what I wrote a few days ago as part of my thesis:

According to Warde (1997) health was rarely a concern in recipes in 1967-8, only four percent of recipes recommended food because it was healthy.  This was before concerns over nutrition escalated; in the 1991-2 sample sixteen percent of recipes made reference to the healthy nature of foods.  There was a common assumption that healthy food equated to light food which would (hopefully) equate to a lighter physical form.  Health (nutritionism) information was increasingly supplied, alongside recipes, about factors such as fat, fibre and calories following the trend of increasing obsession with health and healthy eating, particularly prevalent in the middle class and often more of a concern for women.  Warde asserts that this reflects government propaganda campaigns encouraging healthy eating.

This kind of compromise is discussed by Warde in his book Consumption, Food and Taste (1997).  “Comfort food” is a common term used to describe the consumption of (usually unhealthy) food for emotional pleasure rather than bio-physical health.  This may be a way that lay discourse patches the divide between good and sinful foods – allowing for some emotional pampering on the part of the unhealthy food, but just occasionally.  Warde calls this: “one of the most important mixed messages regarding contemporary food. We should eat healthily; but not if it makes us sad.  Implicitly hedonistic consumption is justified in terms of what the mind and the body need.  This juxtaposition of indulgence and bodily self-discipline identifies a profound contradiction.  Its only resolution is by eating something different tomorrow.  Bangers and mash is for a special occasion, when feeling blue; and that is a most important condition in the world of self.  You deserve to be happy, and to be comforted when not.  The indulgence may be craved for a transgression of the rules.  Ultimately, this is a tale about good and evil, and what is being encouraged is evil.  But you can be forgiven because you feel miserable; if you aren’t happy, try sin!” (1997, p.79)

Now, I think – personally – that the origin of the “good” vs “bad” conversation is important, so long as it is used to differentiate between the “clean” and the “unclean”; those who are “chemically altered” and those who are not. There’s a point in time where imitation foods were clearly labeled and identified as such. That is no longer the case, and my personal beliefs lead me to believe that THAT kind of distinction needs to be made, simply because the nutritional landscape is so different from what it used to be.

She also makes the following point: “According to Warde (1997) health was rarely a concern in recipes in 1967-8, only four percent of recipes recommended food because it was healthy. This was before concerns over nutrition escalated…”

I’d like to offer up an answer regarding why:

The 1938 Food, Drug and Cosmetic Act imposed strict rules requiring that the word “imitation” appear on any food product that was, well, an imitation … [And] the food industry [argued over the word], strenuously for decades, and in 1973 it finally succeeded in getting the imitation rule tossed out, a little-noticed but momentous step that helped speed America down the path of nutritionism.

… The American Heart Association, eager to get Americans off saturated fats and onto vegetable oils (including hydrogenated vegetable oils), was actively encouraging the food industry to “modify” various foods to get the saturated fats and cholesterol out of them, and in the early seventies the association urged that “any existing and regulatory barriers to the marketing of such foods be removed.”

And so they were when, in 1973, the FDA (not, note, the Congress that wrote the law) simply repealed the 1938 rule concerning imitation foods. … The revised imitation rule held that as long as an imitation product was not “nutritionally inferior” to the natural food it sought to impersonate—as long as it had the same quantities of recongized nutrients—the imitation could be marketed without using the dreaded “i” word. — In Defense of Food: An Eater’s Manifesto

Of course concerns about nutrition escalated right before the FDA’s ruling – someone had a vested interest in making sure that we cared less about where our nourishment came from, so long as it appeared to be nourishing.

I know that’s extremely “conspiracy theorist,” but that’s real. If I only need to focus on the little building blocks, it doesn’t matter where they come from. That philosophy was thrown at us for decades – focusing on the little bits and pieces, not simply how they work together. It caused us to flock to certain foods, cringe at the thought of eating others and feel guilt for doing what we’ve always done.

Food is supposed to bring some semblance of pleasure. Ingesting carbs at a respectable rate is supposed to lift your mood. Ingesting a certain amount of fat is supposed to alleviate stress to some degree. Those are evolutionary responses. They’re also manipulated by industries with the intention of making us feel sooo good that we overindulge, use up their product and buy it again.

That reaction – right there – is the origin of what I call The Puritan Principle. If it feels good, it must be bad. We’re intimately familiar with the consequences of said indulgence. We’re “fat” and unhappy about it. We’re extremely unhealthy.

That’s also where we get the idea of “if it’s good for you, it must taste like crap.” We immediately jump to the extreme opposite. It’s why we have so many people who reject the idea of healthy food being delicious.

You have no idea how many times I have to tell people “Yes, I ‘can have’ cheese… and meat… and oil… and cream… and mayonnaise… and eat cleanly.” Their eyes bug out, they get confused, they “go dumb.” If it weren’t for the fact that I’d already lost over 160lbs with this philosophy, they’d truly think I was full of it. The problem isn’t the food, so much as it is the fact that its manufacturing can cause you to lose your ability to control yourself. I have full control over how often I eat it, and how much I eat is tempered by the naturally occurring fiber in the dish.

It’s strange, but that is commonly challenged thinking. It’s actually considered “revolutionary,” believe it or not.

The reality is.. almost any foods made without excess foreign chemicals can be enjoyed with a healthy balance. They won’t compel us to overindulge. They won’t make us feel guilt, because we can accept the fact that it tastes good thanks to quality ingredients… not an abundance of that sugar/fat/salt triumvirate that we find far too often. Our bodies won’t reflect such a long and hard-fought losing battle against our non-existant will power.

That being said… yes, food that doesn’t contribute to poor health (in other words, “healthy food”) can taste delicious, and can actually come in the form of fat… or cream. Ice cream, even. When you’re working with actual real ingredients, that silly “if it tastes good, it must be bad” philosophy doesn’t apply. At all.

(PS: I know that we could get into specifics about preparation – namely salt – but the reality is that a balanced lifestyle will include fruits and vegetables that will negate the effects of sodium in the diet. The key word is balance. Not moderation… balance.)

This post is RIGHT ON TIME! As I move away from processed foods and spend more time trying to prepare and cook meals from scratch, I have been struggling with what I can have. I can admit that I’ve looked at recipes and tossed them aside based on some of the ingredients. Mayo? Heavy cream? Buttermilk? Sugar? Butter? Cheese? NAH!! I can’t possibly eat that! However, this article has brought to light that I CAN! And I agree that items that I take the time to prepare, instead of popping into the microwave or oven, do provide more satisfaction and keep me full longer. There’s something to be said about a meal that I made with real ingredients and my own two hands!

There’s always a new post here to make me happy! 🙂

Recipes are tricky, to me. Sugar makes me cringe. I just.. I can’t bring myself to do it.

A lot of recipes use far more oil and/or basic fat than necessary because the creators aren’t using quality ingredients or they might simply just like that excess that comes with using “too much.” It’s not always worth it.. at least, to me. Then again, I’m NOTORIOUS for altering a recipe.

I feel you though – when you get back to working with base ingredients, THEN it becomes an issue of portion size because you CAN control your portions. Nothing’s interfering with that. That’s how you know you’re winning. At least, that how it is for me. 🙂

Thank you for commenting, sis! Glad I could make you happy. 🙂

I’ve altered recipes myself. I have an issue with all of the sugar, salt, and oil that some recipes call for.