Home The War on Sugar Video Vault: The Daily Show Discusses The Evil White Coats and Their “Salt, Sugar, Fat”

“…the precision with which they formulate their foods….” This should sound familiar, yes? 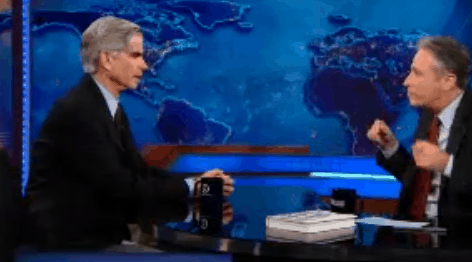 Jon’s point about how there’s guys behind the scenes in evil white coats, when it’s “just food” reminds me of how a lot of people approach processed food. It’s like, well…it can’t be “just” anything when there’s monetary gain at stake. It’s just never that easy.

I think Michael’s point about how the companies aren’t setting out to, intentionally, make us obese… that’s extremely salient. It’s not about them setting out to make us fat and miserable slaves to their products; it’s their “collective zeal to do what it is that corporations do.”

It’s really not about then conspiring to kill us, and that’s the point I keep trying to make – but fail miserably at it – because, without being clear, I just sound like a conspiracy theorist. This is the reason why, when food companies say things like “Yes, over the next ten years, we will change our recipes to have 10% less salt,” when the average person would simply say, “WTF? Just put less in it.” These recipes, for these companies, represent billions of dollars… because they’ve gotten people attached to them. They’re investments, and to have to change that investment all because “some people got fat” or “some people died from their addiction to it” is a major blow to their potential income… especially when, without fail, their competitor will begin sneaking to try to duplicate their recipes.

It’s really not “evil dastardly food scientists” so much as it is really good Capitalism. Like, I respect it.

I also know that I can’t give too much of my time, energy or money to it. Plain and simple.

Refers to “salt, sugar and fat” as “the holy grail.” I call it “the processed food trifecta,” but it works for me.

He also makes a point about how “subsidies go to the most unhealthy products,” but I’m interested in interrogating that a bit more. I’m not entirely convinced that “pointing subsidies towards broccoli” – my personal favorite – would result in broccoli being cheaper than what’s available now.

I know that sounds weird, but let me try to explain, since this is economics, too:

Take McDonalds, for example. It’s a perfect example of taking what’s cheaply available and turning it into major profit. Like, for example, the McRib. The McRib isn’t necessarily a “seasonal” product; the McRib becomes available ONLY when pork prices are low due to high availability of pig by-product. You can track it, like clockwork, by watching pork prices.

MickeyD’s, much like Kraft, General Mills and almost any other food conglomerate, will simply take whatever’s the cheapest on the market when it’s the cheapest and turn it into a highly processed product, find a way to mass produce it, and then break it down into the sum of its parts, using it in various products and making as much profit off of it as possible. That’s just how it is. In my mind, turning broccoli into a subsidized crop wouldn’t make “broccoli cheaper;” it’d just make a bunch of McBroccolis, or Broccoli-A-Ronis. We’d be right back into the same cycle. Bet money on it.

I haven’t gotten to reading Salt, Sugar, Fat yet – still trying to make my way through Pandora’s Lunchbox which, holy jeez, that book is terrifying – but the excerpt that was the cover story on the New York Times Magazine included the section that discussed “vanishing caloric density” and, well, yeah. It’s something else. You can check that excerpt out for yourself (and my thoughts on it) here.

But the fact that the Cheeto could be hailed as anything other than “a damn shame” kind of hurts my soul. Just a little.

Oh, and making junk food that can be fed to gastric bypass patients through tubes? Not gonna touch it.

“It’s kind of astonishing how many of them, who’ve left, have some regrets…’I really feel sorry for people.'”

I DID roll out of my seat laughing at the brief discussion of the former Coca Cola CEO. Baby carrots. I wonder how much they cost.

I’m interested in this neighborhood keeping kids from eating junk foods in the morning. Who knows anything about that? I know one of you lives there. Spill it!

These are my thoughts. What are yours?

Celeb Watch: Brandy Admitted To Having An Eating Disorder?

Breaking Up With Fried Green Tomatoes