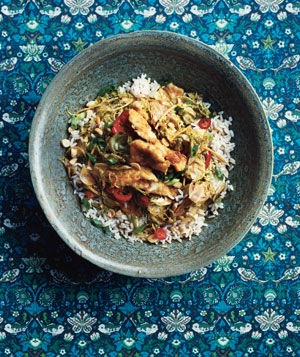 Cook the rice according to the package directions.

Meanwhile, in a large bowl, beat the egg. Place the cornstarch in another large bowl. Add the chicken to the egg and toss to coat. A few pieces at a time, lift the chicken out of the egg and coat in the cornstarch, tapping off the excess; transfer to a plate.
Heat 2 tablespoons of the oil in a large non-stick skillet over medium-high heat. In 2 batches, cook the chicken, turning occasionally, until golden, 3 to 5 minutes (add more oil for the second batch, if necessary); transfer to a plate.
Heat the remaining 1 tablespoon of oil in the skillet over medium heat. Add the Brussels sprouts, ginger, and garlic and cook, tossing occasionally, until beginning to soften, 2 to 3 minutes. Add the soy sauce, vinegar, sugar, and ¾ cup water and cook, stirring occasionally, until the Brussels sprouts are crisp-tender and the liquid begins to thicken, 2 to 3 minutes more.
Return the chicken to the skillet, along with the chili, and cook, tossing, until heated through, about 1 minute. Add the sesame oil and scallions. Serve over the rice and sprinkle with the peanuts.
FacebookTwitter
Subscribe
buttercarrotscrushed red peppergarlicpinto beansspinachsquashtomato
0
FacebookTwitterPinterestEmail

Shot Girls: Read An Excerpt From A Video Vixen’s Book About Booty Injections