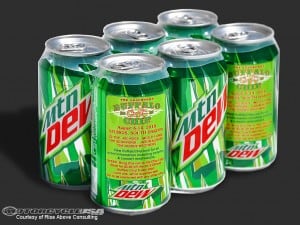 Pepsi Co., facing a lawsuit from a man who claims to have found a mouse in his Mountain Dew can, has an especially creative, if disgusting, defense: their soda would have dissolved a dead mouse before the man could have found it. An Illinois man sued Pepsi in 2009 after he claims he “spat out the soda to reveal a dead mouse,” the Madison County Record reports. He claims he sent the mouse to Pepsi, which then “destroyed” the remains after he allowed them to test it, according to his complaint. Most shudder-worthy, however, is that Pepsi’s lawyers also found experts to testify, based on the state of the remains sent to them, that “the mouse would have dissolved in the soda had it been in the can from the time of its bottling until the day the plaintiff drank it,” according to the Record. (It would have become a “jelly-like substance,” according to Pepsi, adds LegalNewsline.) This seems like a winning-the-battle-while-surrendering-the-war kind of strategy that hinges on the argument that Pepsi’s product is essentially a can of bright green/yellow battery acid. The lawyers still appear to be lawyering behind the scenes but we cannot wait for this to come to trial (though we think a trial is about as likely as the chances of us “Doing the Dew” ever again). [source]

Grist comes in with the snark:

The idea that soft drinks can dissolve, say, a tooth or a penny is frequently trotted out by anti-soda folks (even though they won’t, or at least not quickly). But this isn’t the PTA trying to get Pepsi machines out of schools. This is Pepsi Co. itself saying that its product will dissolve a rodent corpse over the shelf life of a can. This might win them the lawsuit, but as a marketing strategy, “Mountain Dew: If it has vermin in it, you’ll never know” could use a little work.

Now, we can chat about pH balances and acidic content, and that’s cool. I’m still far more critical of a substance with absolutely no nutritional value that does more harm than good than I am, say, orange juice. (Or maybe not. Let’s not use orange juice for an example… let’s say, apple juice? No? Oh. Carrot juice? Yes? Ok.) There are a thousand more reasons to not drink pop, but that doesn’t change the fact that the Ick Factor on this is pretty darn high.

Beyonce Teams Up With Michelle Obama For Workout Video

I started to gag just reading the title! How are these companies getting away with putting out this kind of crap for human consumption?? I don’t get it.

I will definitely be using this for my Mountain Dew drinking patients at the dental school. Thanks!

Ughhh! Yet another reason not to buy packaged/premade foods…you don’t know exactly what happened to the items before they entered the packaging.

And another reason not to drink soda! I have made a huge effort to reduce my diet soda consumption…it was incredibly difficult as I used to drink it constantly. In fact, the first 3 days or so reminded me of how it felt when I quit smoking- ridiculously intense. And I haven’t had any since 2011! Sometime in November or December…anyway, this post is going to help me resist the next time I’m tempted to open a can of soda.

That is scary. It’s a good thing I don’t soda.

Okay, now that was disturbing. I can’t believe they actually admitted that in order to win a lawsuit. Nasty.

I saw this headline earlier and saved it because I’m a fan of Mountain Dew. I can wholeheartedly say that I will be pouring every can into a glass and looking for any gelatinous substances.

Thanks for sharing the nightmare.lol

I’m gon’ make you stop drinking that mess if it’s the last thing I DO!

LMBO..Sir I agree. Will definatly be pouring…

Nas-tee! Time to give up soda forever. Ewww.

Ahhh…. I used to consume massive amounts of this particular poison, usually to wash down the cheap college pizza and No-Doz. (It was 1991, don’t judge me!) The dissolved mouse image will stay with me forever.

And uh, Erika – since you wrote the word ‘Pop’, I have to ask….are you originally from the Midwest?

…..and I just had a cup of Mountain Dew less than 5 minutes ago, knowing good and well I shouldn’t have consumed it. If this isn’t confirmation to leave that crap alone, I don’t know what is. Thank you!

This absolutely disgusting. I have cut down on drinking pop because I didn’t like how it made me feel after a while…..This story just made my cut down turn into a complete shut down lol. Nooo pop for me EVER!

I remember in college my professor telling our class she restarted a dead car battery with Pepsi. That was all I needed to confirm that my decision to no longer consume soda was a wise one.

I’m glad I gave up drinking pop years ago!

Ders crack in soda! Ik d goverment knows something! Cause im struggling to give it up!

I actually LOVE Pepsi & Mountain dew – knowing full well it will corrode my insides. Talk about an addiction. – HOWEVER~ this headline makes me take a deep breath and think wow they are admitting this crap kills and will disintegrate flesh!! – THAT IS THE INFORMATION THAT SHOULD BE MANDATORY on the label. – Cigarettes take years this does it during the SHELF LIFE!

This isn’t surprising considering that a can of coke can be used to dissolve build up on a car battery and dissolves many other types of build ups as well. I have only had one mountain dew my entire adult life and I wouldn’t drink it if you PAID me to!! That drink is liquid crack acid in a can !! The fact that children ingest this mess and them come to my classroom to be taught after having battery acid and sugar in their stomach is ridiculous! Of course they can’t focus because their insides are being fried!! SMH

So, what we’ve really learned from this is that PepsiCo could indeed make their own horrific version of a jello shot.

Oh Thank you for this. I am struggling with giving up these sweet drinks!