Home From Erika's Kitchen Scratch Factory: The Fastest (and Healthiest!) Spinach and Artichoke Dip Ever

Scratch Factory: The Fastest (and Healthiest!) Spinach and Artichoke Dip Ever

You get that obnoxious phone call.

“Hey, uh, I think I forgot to mention, but my siblings are getting together at our house tonight for drinks before we go to Grandma’s for dinner.”

You look at your phone with the ugliest of faces.

“Jeez, I can feel that look through the phone. Just.. don’t worry about it – I’ll bring home drinks, just make some big appetizers or something. It shouldn’t be a big deal. Gotta go – love you!”

And, in that minute, you look around the house. The laundry is everywhere, your kid left their clothes on the bathroom floor, and for some strange reason you notice paw prints on your couch cushions.

You start speeding back and forth across the house, Sonic the Hedgehog style, trying to clean and – frustratingly – brush these paw prints off your darn cushion.

What time is it? Wait – what time are they coming? You fire off an angry text, and get one response with a blushing emoji: “in, like, 25 minutes. be home soon. love you.”

It’s enough to make you wanna kick over a trashcan, but then you’d have another mess to clean up.

While taking deep breaths, you walk into the kitchen to figure out how to make sense of this mess. You pull out a 1lb bag of frozen spinach, a little brick of Parmesan cheese (enough to give you a half-cup of cheese shredded), a lemon, a couple red peppers, a jar of artichokes – wait, why do you have artichokes? – and….bingo. 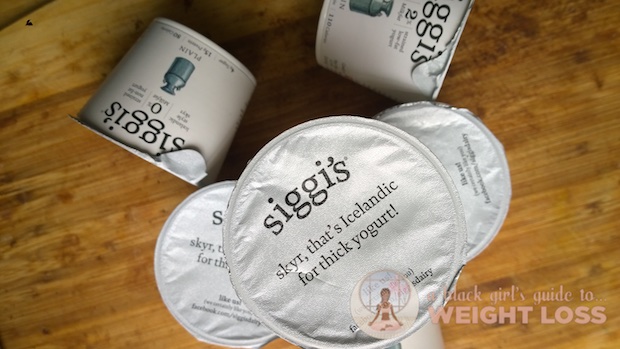 You, in all your benevolent brilliance, decide to make a quick spinach and artichoke dip using siggi’s high-protein low-fat Icelandic-style “Greek” yogurt as a base because, for one, it’s just as creamy but with practically no fat in it and, for two, it’s super-high in protein, making it more than the former mayonnaise-and-sour-cream-filled fat bomb it once used to be. The right amount of fat, the right amount of protein, and a ton of veggies? Now, it’s got way more to offer. 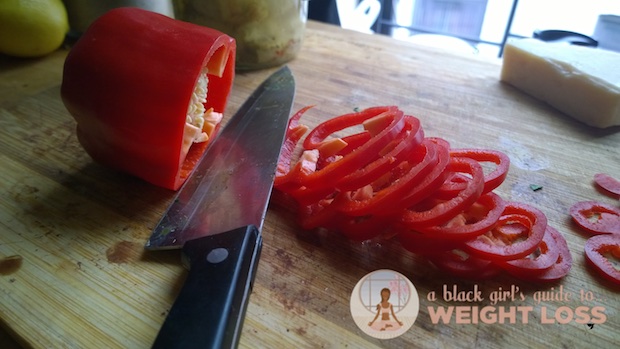 You grab a red pepper, and you dice it the cheater’s way by cutting thin ringlets out of the pepper from the side and working your way to the other end… 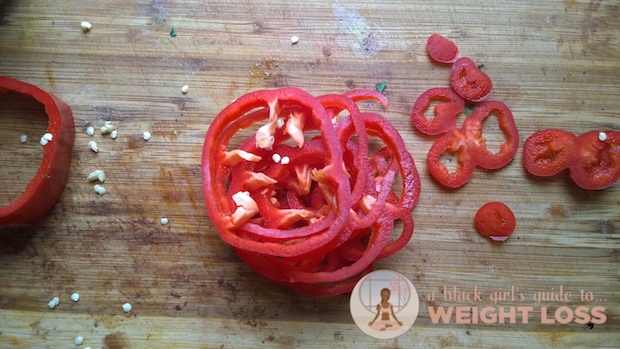 …then stacking all of your ringlets on top of one another… 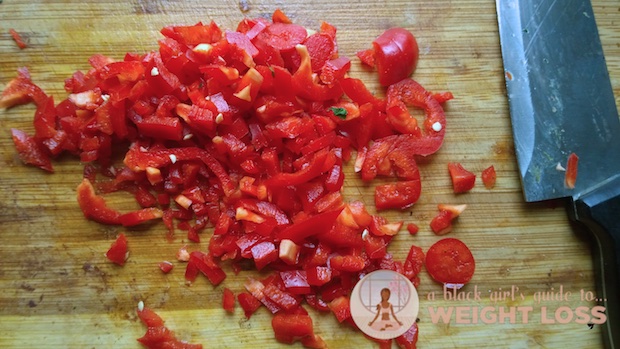 …and giving them a super chop across the top, leaving you with tons of tiny diced chunks of red pepper. 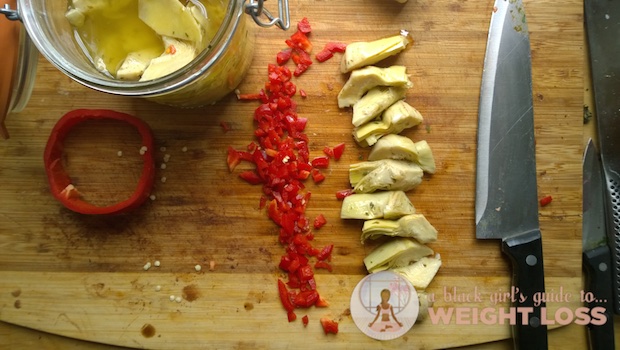 You slowly start to lay out about a cup’s worth of artichokes, and cut them into small pieces. The red peppers, the artichokes, the juice of half a lemon, and your frozen spinach all go into the same skillet on low heat with a cover, so that it can heat up. Sprinkle a pinch of salt across the top of that skillet like a pro, girl. 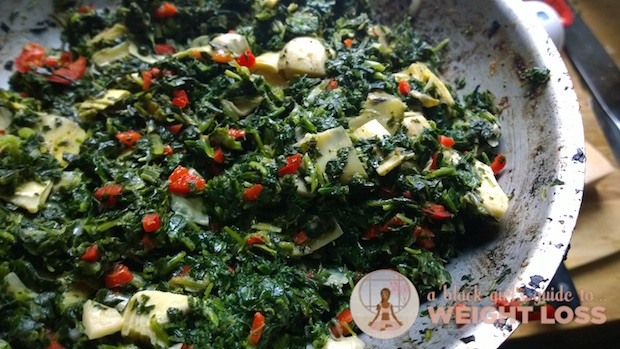 Take a brick of Parmesan cheese and cut off half of it. You shred that larger half to within a millimeter of its life, and you toss that in the skillet with the spinach mix. 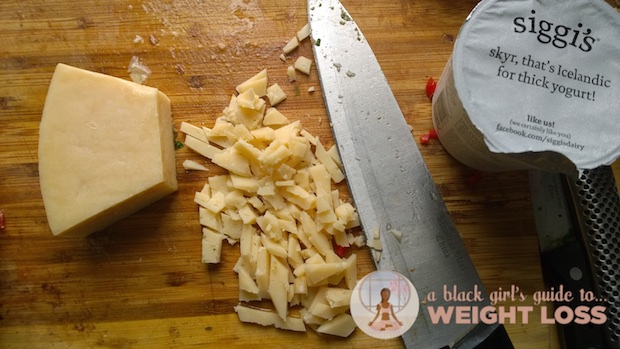 The other half, because you’re a bawse, you just cut into big chunks and throw in the blender. Whatever, no big deal. 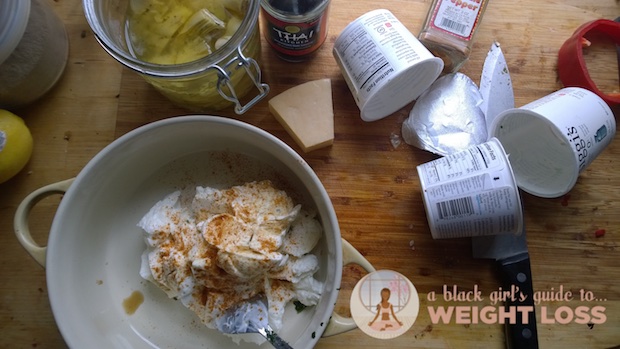 You take the three cups of 0% Siggi’s Icelandic Greek Yogurt from the fridge and dump them into a medium-sized baking dish. You sprinkle an eighth of a teaspoon of cayenne pepper, and a half of a teaspoon of fish sauce (optional, but – as disgusting as it might sound, you should use it because it’s delicious) inside on top of the Greek yogurt, and stir it up. 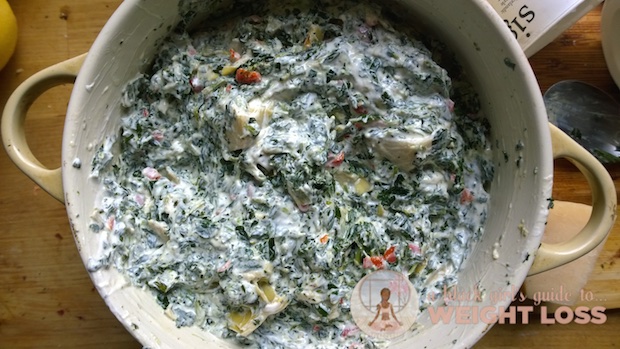 Your spinach blend, once the cheese has begun to melt in the skillet, you slowly pour on top of your Greek yogurt in your baking dish, and stir up to mix everything together. Don’t be afraid to add a little bit of that marinade from your artichokes to your dip, either. A tablespoon or two can do wonders. 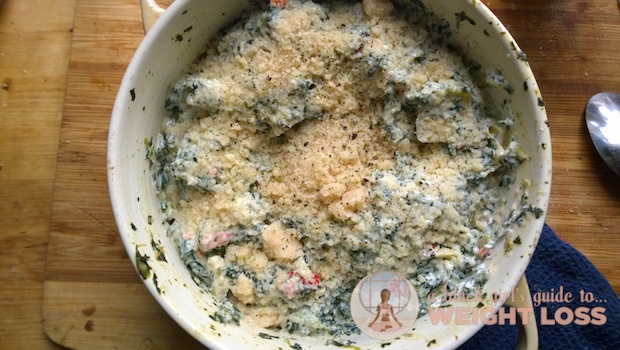 That ground-up Parmesan? Yeah – you throw that across the top of the dish, and slide it in the oven to let it warm up while you handle this little red pepper and carrot crudites right quick. 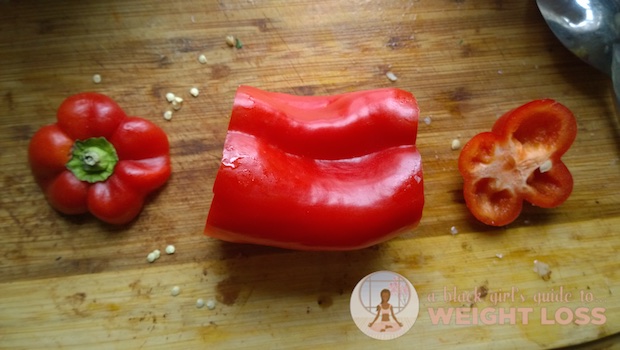 Getting fat sticks out of a red pepper is pretty easy: cut the head and the end off of a red pepper, pull out the seedy core. Cut a slit in the red pepper so that the center unravels and will lay semi-flat, and boom: you have a primo opportunity to cut fat sticks out of your red pepper. You quarter some carrots and make some homemade tortilla chips. Chips for them, crudites for you. Well, maybe a chip or two for you. Whatever, it doesn’t matter. You’re rockin’ this thing. 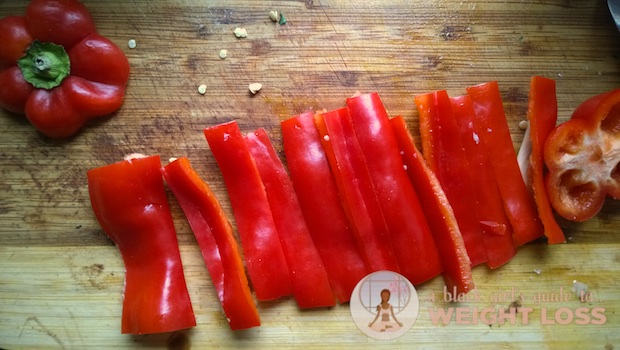 Fifteen minutes pass. You pull your spinach and artichoke dip out of the oven. It smells delicious. 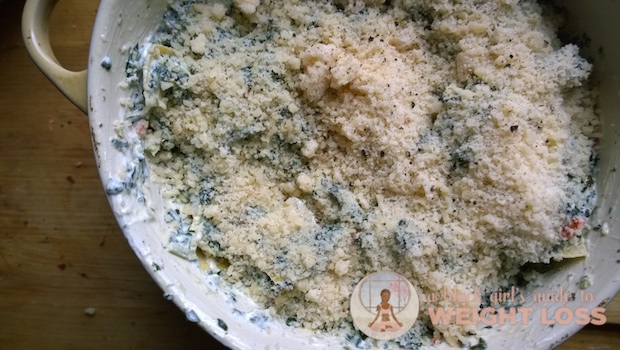 You taste it – it needs a little bit of salt, and a pinch of something else, so you sprinkle a pinch of salt and a little bit of black pepper across the top. You throw everything onto a couple of fancy bowls and plates, put them on a serving station, and ta-dow. Instant crowd-pleaser. They’ll never know it wasn’t the traditional mayonnaise and sour cream-based fat bomb it’s always been. 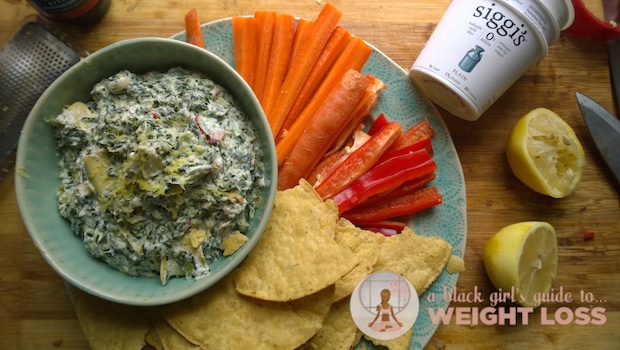 You made a quick and delicious appetizer to go with the drinks your boo is bringing home, and – get this! – boo was smart enough to bring some fruit platters home, as well. Once again, you proved why everyone comes to your house first. 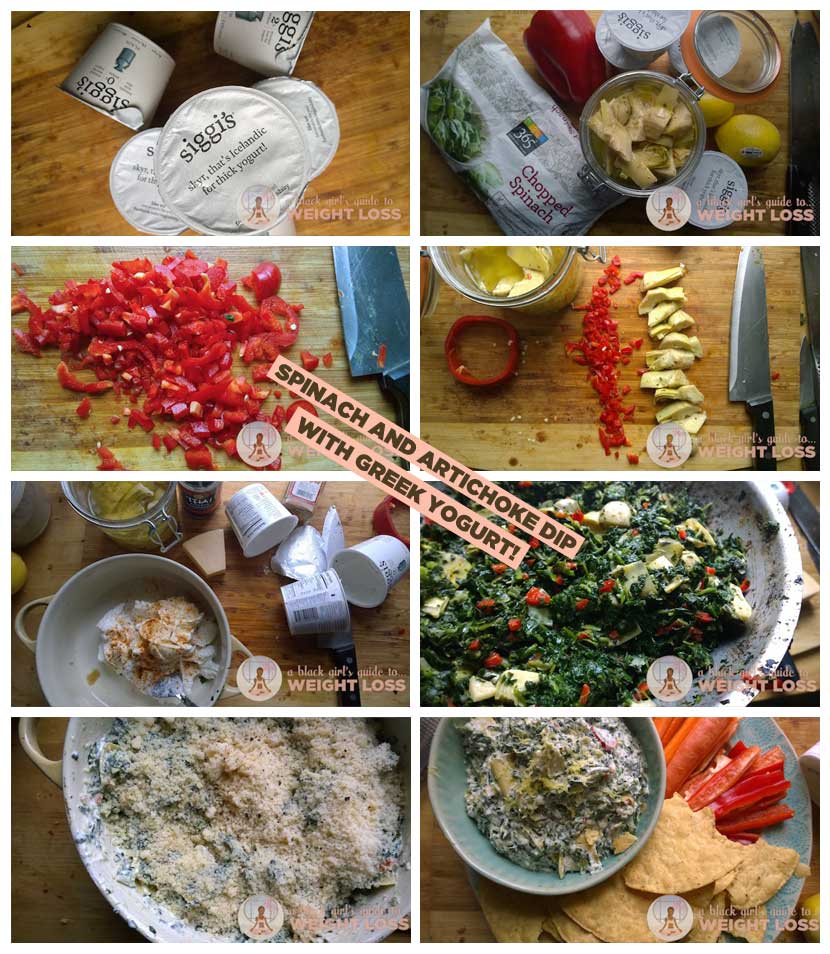 Making spinach and artichoke dip out of siggi’s Greek Yogurt is easily one of the quickest and easiest appetizers ever. Let me show you how it’s done!

siggi’s rather delicious yogurts with simple ingredients and not a lot of sugar.
Try delicious flavors like vanilla, pumpkin & spice, and mixed berries & açai, power up your breakfast with their recipes and print a coupon.

This is a sponsored conversation written by me on behalf of siggi’s Dairy. The opinions and text are all mine, as always.