Home All About Your Body Why Exercise Makes You Gain Weight, and How to Change It

Why Exercise Makes You Gain Weight, and How to Change It

A while back, I wrote about an article that appeared in Time Magazine about how exercise doesn’t make you thin.

It was a tale of woe, with the author complaining that their workouts, followed by half a Starbucks muffin, resulted in weight gain.

I suspect that this is the case for lots of others out there.

A rigorous exercise routine without a clear and concise eating plan can, without a doubt, contribute to weight gain for a number of reasons. Let me see what I can do to help explain a few.

To start, we have to talk about your metabolism. In general terms, metabolism is the combined efforts of all of the systems in your body that work collaboratively to keep you alive. In terms of weight loss, this matters because all of these systems require energy to ensure that your body is running optimally. By energy, I mean calories.

All of the systems in your body are running non-stop – yes, even when you sleep – to keep your body functioning properly. These processes are burning calories constantly. Your heart is constantly pumping blood, your liver is constantly detoxifying, your muscles are constantly in use. It is an incredible system and it takes a lot to keep it running strong, but different components burn different amounts of calories per hour than others. For instance, a pound of muscle burns more calories than a pound of fat. (I’ve seen wildly varying exact numbers on this, so I can’t pin it down to a specific number for either, but the main consistency is that muscle burns more calories than fat.)

When you eat, you’re fueling those systems and their ability to run more optimally. When you eat what your body needs (and your needs are determined by your activity levels over the course of the day), you’re running supremely. When you eat less than that, by a small margin, your body simply starts to eat away at body fat in order to continue functioning. When you eat less than that by a moderate margin, your body starts to eat away at muscle tissue. The larger the margin, the more systems begin to shut down… eventually attempting to force the body to start grasping at the body fat as a means of clinging to it.

If the body believes its in a perpetual state of lack, it will preserve the body fat because, the less the body fat, the more other MAJOR bodily functions start to suffer, hence female athlete triad – amenorrhea (you stop having your period unrelated to menopause), osteoporosis (bone damage due to malnutrition), eating disorder-related issues. Your body clings to body fat as a means of protecting you from this because, at a certain age for girls and women, once you start experiencing things like amenorrhea, you’re losing – or permanently harming – other invaluable processes, as well.

Keeping in mind that your metabolism is going constantly around the clock all-day, if you’re burning 600-800 calories per exercise session – for starters, you REALLY want to have a heart rate monitor – and eating only 1200 calories a day, that means you’re really getting 400 calories worth of energy to power you throughout the day. You should want to shoot for 1200 calories OUTSIDE of your workouts, because chances are high you’re burning more than 1200 calories outside of activity, anyway. You should want your end-of-day deficit to be around 500 between exercise, daily activity and nutrition in order to have a safe and healthy weight loss… and that’s if you’re average height, average weight (5’4″, 155lbs.) It fluctuates beyond that.

As your trainer, if you told me that you were eating that little, I’d expect you to experience a major weight loss – mostly water weight, and I’d likely throw you on a body fat/lean body mass/water weight percentage calculating scale to determine that – and then I’d expect a major plateau. It’s simply an untenable means of losing weight. 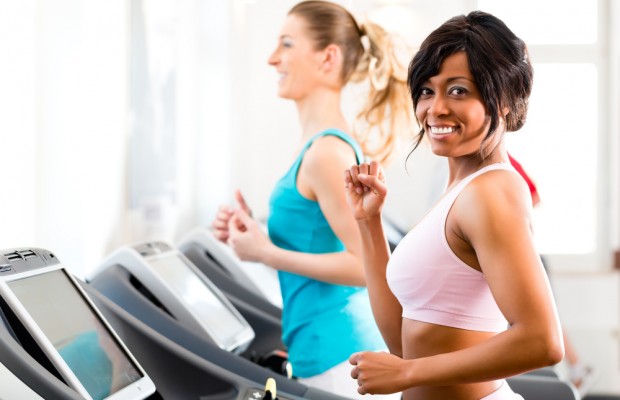 But, let’s take it to the other end of the spectrum – you’re not eating a measly 1200 calories – you might not know how many calories you’re actually eating, but you know you’re eating more than what 1200 represents to you.

Vigorous exercise makes you hungry. It’s supposed to. In terms of evolution, prior to organized agriculture, you’d wither away to nothing if being active didn’t ultimately make you hungry.

Remember what I said earlier, about muscle burning more calories than fat? It’s important because, as you look to lose pounds, you have to acknowledge that fat loss will cause your metabolism to shrink. Adding a pound of muscle, however, will cause your metabolism to increase. A person who loses 40lbs of fat but then gains 15lbs of muscle over the course of two years ultimately has increased their metabolism to higher than it was prior to losing the weight in the first place. The ability to increase metabolism without increasing one’s body fat percentage (actually, while decreasing one’s body fat percentage) is what makes muscle building an essential part of maintaining weight loss.

The loss of muscle during an episode of weight loss, however, means that your metabolism is shrinking in multiples, meaning that you’d be required to eat even less in order to maintain your weight loss. And, while this is common sense for some, the hard part of weight loss is the fact that many people are shell shocked by how much less they’re able to eat. Their natural habits are used to larger plates, larger quantities. Habits win over everything. Adding muscle to your plan – even as little as five pounds throughout your entire body – can help combat that. This also contributes to weight gain – rapidly shrinking metabolism with no control of caloric intake. It’s begging for a plateau, and it’s pleading for weight gain.

And, even still, say you’re not even burning muscle. There’s so much energy already in your blood stores that you are completely fine on that front. Except, you’re gaining weight.

If you find yourself coming out of your training starrrrrrrving, your pre- and post-nutrition needs to be tightened up. You shouldn’t go into training on an empty stomach, and you shouldn’t be coming out of training feeling like you’re going to inhale a house. What should you be eating? That depends on what your exercise routine consists of and its duration, something I’d love to dive into in another post.

In short, a closer look at your pre- and post-workout nutrition, keeping track of your body fat and lean body mass percentages, and a watchful eye on how many calories are left after you’ve done the math of calories burned over the course of the day – calories consumed can all help you avoid having your hard work result in weight gain, instead of the weight loss your actually desire!

Does this explain why exercise has been causing you to gain weight? Or is it something else? Let me know in the comments below!

Q&A Wednesday: Should She Go Lap-Band?

You make it all so clear and the pre/post workout nutrition tip is spot. My advice to people trying to lose weight is don’t just use your muscles, grow your muscles. Think of it as a war and they are your weapons, the more you have, the better your chance of victory.

I had begin gainin weight while with a trainer and got discouraged. I didnt know what was going on.

this makes so much sense! thanks for breaking that down. so if i’m not really trying to lose weight, just tighten up my shape (flatten that stomach), I should focus on weight training and making sure I’m getting the right nutrition & calories so I don’t lose the amount of body muscle I currently have.

I’ve gained and lost over 30 lbs several times over the last 15 years, I am on a 20lb gain trail presently, I usually gain weight when I am injuried or sick and unable to exercise (i am also a compulsive overeater), after recovering from bad sinusitis infection the kept out the gym for over two months, I resumed consistent exercising for the last 4 months and find myself in familiar territory of deconditioning in spite of my workouts, I typically jog for 30-40 minutes 5 times weekly, two day on/one day off, lately I am finding it difficulty to jog 5mph, I’ve added kettle bells workout with fitness blender to add weight training twice week and decreased running to 3-4 times, and yet jogging at a speed by now should be easy, is becoming increasing difficult, this happens to me over and over again (physical fitness and endurance decreasing from baseline after months of training), please help me correct my mistakes, I’ve tried personal trainer and I’ve been injured under their care, I stretch 10 minutes pre and post workouts to keep at bay plantar fasciitis, achilles, and iliotibial band and knee injuries, I also do special exercises to strengthen my knees, desperate from any insight

You’d have to e-mail me privately for this, sis. This isn’t enough information to offer the most helpful advice.

Just found this blog & it is AMAZING! There are so many women out there that need support in accepting themselves and loving themselves the way you do. You’re an inspiration. Keep up the good work!

Is this all to say that fasted cardio is a bad thing?