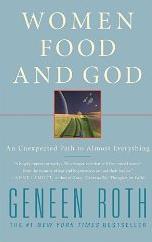 Yesterday, I was able to catch a glimpse of an episode of Oprah’s show, where she featured (read: sold) a book by the name of “Women, Food and God.” I mean, take a look at the commercial above – talk about heavy-handed.

I don’t usually get to watch too much daytime TV because my TV is tuned to The Backyardigans or [insert current Nick Jr. phenom]. However, when I saw the tip from twitter to check the episode out, I couldn’t help but to give it a shot.

If you think the commercial was heavy-handed, you’ll definitely find the episode itself difficult to watch.

I don’t even have to read the book to know that emotional eating is real. The concept of eating your feelings, hiding from your feelings in food, eating to numb the pain… I get it. I’ve been there. I occasionally will slip back there, only to find that food no longer gives me “that feeling” that it used to give me when I was in the height of my bad habits, and that moment – that moment when I realize it’s “not as good as it used to be” – only further reinforces the understanding that I cannot hide in food anymore. Obviously, the whole “hiding in my food” thing happens less and less nowadays for me.

Anyone can write a book these days. Don’t expect each of them to carry some novel Nobel Prize-worthy epiphany, because they wont. For many of the readers of this site, we’re well aware of the importance of making healthy and sound food choices, but what happens when you know what you should be doing, and still don’t? Is it too far fetched to think that maybe – juuuuust maybe – there is something other than laziness at play, here?

As women, we’re not only expected to put everyone before ourselves (we are society’s caregivers, mind you), but we’re also expected to go out of our way to make sure that we stay skinny while we do it. Nothing of our mental health, nothing of our internal health, nothing of our own happiness. Just look the part… make everyone think [insert arbitrary and, in the long run, meaningless concept]. And unfortunately, trying so hard to look the part results in not only a ton of guilt on us for failing to do so, but it forces us to complete the cycle: what can we turn to in order to make us feel better, happier, and calm without giving us more guilt? Food. The shortsightedness of the cycle, mind you, prevents us from seeing the guilt we feel for having eaten whatever food item we hid within.

And, y’all, that guilt thing? That’s real. I actually took out my pen and took notes from what the women were saying:

“I hate myself for having no self control.”

“When I’m eating, it just takes me away from everything..”

Women hiding food in their houses… eating in shame? “I just make a pie crust dough, and eat it out of my tupperware… my husband doesn’t even know I do it.” For real? C’mon. That’s not indulgence. That’s an addiction. Trust me. I know. This is coming from someone who used to hide chips, donuts, those little 4-packs of Starbucks, a small bakery, half a convenient store and perhaps a 2 liter of soda pop to wash it down… all under her bed. You might even find a bottle of ranch dressing in my closet. I’m just sayin’. I know.

That overarching point that spoke to me? Stop guilting yourself, stop shaming yourself and stop coping with both by hiding within food. And if you cannot find a better way to cope? Ask someone. This is mental health awareness month, after all.

I didn’t watch the entire episode so I can’t really speak on the book, but I know that many of you checked it out. What are your thoughts? Are you going to pick up the book? Already read it? Let’s hear it!

Subway Severs Ties With Jared Fogle After He...

I read some excerpts from this book on Amazon, and it seems like it is a book about what Jon Gabriel calls “emotional obesity”. I read Jon Gabriel’s book “The Gabriel Method” last year and it completely opened my eyes to a lot of emotional issues surrounding food that I had been ignoring. I am not a religious person, so I usually shy away from books with the word “God” in the title, but if it does in fact discuss matters similar to those in Jon Gabriel’s book, than it is indeed worth checking out.

I link to Jon’s book on my blog.

hey Erika!
I didnt get a chance to catch the show either. However since we are talking about books….are there any must reads that you have read or any documentaries. I’m watching Food Inc. tonight I told myself I would ask you if there was anything else I should read or watch….along with my daily reading of this site of course. 🙂

Ahhh, I do have a few recomendations – you’ll have to let me know what you thought of Food, Inc. It’s sobering, but you should definitely grab the book that accopanies the DVD, as well. Perhaps this will come in another blog post. Thanks for dropping by! 🙂

The guilt thing is real! I do have the book but have not read it yet. This is a really great blog post!!!

Keep me posted if you ever get through it. I’m considering snagging the audiobook, just because I like books, lol. Thanks for commenting!

I have the book and have read about 60 pages. Yes, it pretty much covers emotional eating and food addiction, and recognizing that your eating is NOT about eating or food, but some deeper issues.

I’m glad you pointed out the heavy handed-ness. Frankly, the book isn’t a cure all, just one cog in a wheel that might get you to the point of having a healthier attitude toward food, and toward yourself. I’m taking what I need from the book, and other sources (your website, cookbooks, exercise plans, etc) to put together a wholistic plan to get me where I need to go. It has its merits, but its definitely not a cure all, nor is it life-changing.

Thank you for commenting! I’m considering snagging the audiobook and giving it a listen, because I think emotional eating is a big issue – it’s worth giving a little time to all the different approaches, to me.

I really appreciate your insights as someone who’s given the book the time of day. 🙂

Hi. I missed both Oprah shows with the author.Over the weekend I picked up the book and started reading it in the store–it hit a nerve and I bought it. I am reading a bit at a time–slowly digesting it. As a person who had lost 90 lbs, but has since gained some back because of medical issues I have to say losing al that weight made me feel “in control” of my life–then the medical issues thrust me back into feeling out of control. So it comes down to a “what’s the point feeling”–I can’t win anyway. Even if intellectually I KNOW when I am eating out of stress it doesn’t help me stop the binge. The book is not a cure-all, but a tool. When I was in the process of losing those 90 lbs I kept a journal and when I wanted a bag of chips and wouldn’t let myself have it–emotions I never knew erupted and it was hard. It’s hard being fat and it’s hard knowing there are emotions inside that are difficult to deal with if you are an emotional eater. What I am taking away from the book most of all right now is a quote from Pam Chondron “never underestimate the inclination to bolt.” I think about it when stress washes over me and I want to eat some chocolate. I ask myself what am I bolting from? Sometimes I can deal with the emotions and other times the chocolate wins. The battle will not be won overnight and that’s ok. And just a side note–don’t be afraid of the word “god” in the title–the author says she just using it as a substitute for connecting with something bigger than yourself.

BTW This is my first time on your site-it’s nice.

I’m currently reading the book and its an eye opener for me. I’m a huge(and I dont use this word loosely) emotional eater and in beginning the book I cried a lot because I see myself in majority of what she is saying

I read the book and another one of G. Roth’s. I can honestly say that they did touch on some valid points. I want your feelings about OA (Overeater’s Anonymous) Geneen Roth and Tinny McCarty (Ruby and Addicted to Food’s Therapist) really support the movement. I’ve heard lots of good things about the organization. What’s your take, Soror?

Hey Lady! I tweeted you some months ago about this book. I listened to it on CD. It was a heavy read. My ah-ha moment was when she related my view and relationship with food to how I view myself, my worth and my ability to work through life issues as a whole. I’m a yo-yo dieter so my issues with food and the way I deal can be very black and white. I was struck by how emotional I got as she kept urging women to move beyond the guilt and punishment and this continous to need to judge oneself and other women constantly and with such anger and without compassion, mercy, honesty an dlove. I had to turn off the CD often. I was grounded by her prompts to check my spirit about why I feeling what I’m feeling in that moment and how that leads to how and what I choose to eat.