Two words that send a wave of nausea across my body. I can’t even say them.

The raid started around 6:30 a.m. Tuesday. An evidence truck could be seen parked in the driveway. Investigators from the FBI and Indiana State Police were at the scene.

Earlier this year, Russell Taylor, the former director of the Jared Foundation started by Fogle, was arrested in a child p-rn-graphy case. He was accused of possessing and producing child p-rn-graphy. Investigators said a search of Taylor’s home turned up more than 500 videos with images of child p-rn-graphy. In May, Taylor unsuccessfully tried to kill himself while in jail.

Fogle said the foundation severed all ties with Taylor following the arrest. Investigators wouldn’t say if Tuesday’s raid was connected to that case. [source]

I cannot begin to express my disappointment and disgust with regard to all this. Truly, I can’t.

The Indiana Internet Crimes Against Children task force is the lead agency on the investigation.

They are removing electronics from the home and they are being analyzed inside a mobile forensics van in the home’s driveway. 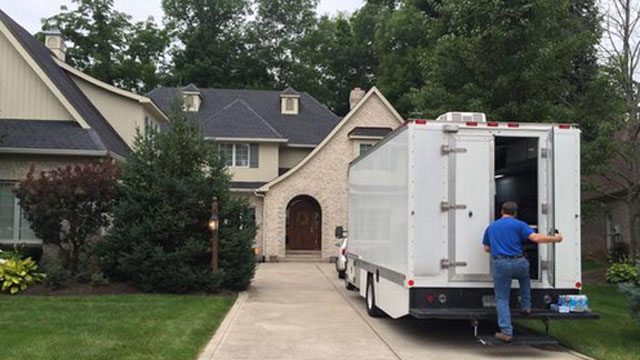 Fogle has been detained outside his home, although he is not under arrest.

Fogle’s wife and children left the home shortly after the raid began.[source]

To be sure, we don’t know exactly what is in that warrant yet, even if the fact that they’re in his driveway with a van to analyze his hard drives gives you a pretty safe guess. We’ll have to pay especially close attention to coverage of this as the day advances, and if I spot any new information I’ll definitely update here. But really… really. The nausea that I feel is overwhelming.

A few quick words about The Jared Foundation, though:

The Jared Foundation’s mission is to eliminate childhood obesity. As a leader in the movement to help children learn life-long healthy diet and exercise habits, the Jared Foundation strives to raise awareness and develop programs that educate and inspire kids to live healthier, happier lives. [source]

The director of this organization was caught with 500 videos of child p-rn-graphy. 500 videos? I don’t even know what to say anymore. I truly don’t. I most certainly wouldn’t trust that organization to help me with anything related to children, though. That’s for damn sure. We may not be able to say anything for sure on Jared, but that foundation gets the eternal side-eye from me.

FBI agents and Indiana State Police are at Fogle’s in Zionsville, Ind., and have removed electronics from the property.

FBI special agent Wendy Osborne said Tuesday that the FBI was conducting an investigation in the Zionsville area but wouldn’t confirm it involved Fogle.

CBS affiliate WISH and The Indianapolis Star report the house belongs to Fogle and that he was detained while electronics were removed from the home and analyzed inside a mobile forensics van.
Investigators from the U.S. Postal Inspection Service are also on the scene and assisting with the investigation, according to Dan Taylor, an inspector with the agency’s Indianapolis office. He noted that the agency is called in when investigations involve items sent through the mail. [source]

Update – 2:04PM EDT from the Clarion-Ledger:

State police detectives began investigating Taylor after getting a tip from an acquaintance, according to court documents.

A woman was exchanging texts of a sexual nature with Taylor when he asked if she wanted to see pictures of young girls, court documents said. The woman was concerned and called police.

Investigators from the Indiana Crimes Against Children Task Force obtained a search warrant for Taylor’s home in the 1300 block of Salem Creek Boulevard and found over 400 videos of child p-rn-graphy on computers and storage media, which were recovered from Taylor’s home office. According to court documents, four minors have been identified as the victims in the case.

After Taylor’s arrest Fogle issued a statement that said he was “shocked” over the allegations and that the foundation was “severing all ties” with Taylor. [source]

From the Indianapolis Star

Over 400 videos of child p-rn-graphy were found on computers and storage media.

It added many of those images appeared to have been made in bedrooms and bathrooms at Taylor’s former and current homes. “Many of these videos showed the exposed genitals or pubic area of the children” – both boys and girls – and that the “minors did not appear to be aware that they were being filmed,” according to the court record.

The court documents also said Taylor had an interest in bestiality and shared images with an unnamed person involving a “dog licking the nude genital area of an adult female.” Taylor has not been charged with any crimes related to that video or alleged bestiality. [source]

According to a Best Week Ever exclusive from back in 2007, while at Indiana University, Jared ran a black market p-rn-graphy rental service straight out of his dorm room. From Best Week Ever:

It only gets darker from there. The reason Jared started chowing down on Subway sandwiches in the first place was because the chain had opened up a store on the first floor of his college dorm. And since his “job” (read: dealing out p-rn to his friends for free) was just a closet away from his bed, “Jared began eating the sandwiches out of extreme laziness.”

A fact that makes all those Subway commercials—to say nothing of our hearts and souls—just a little bit darker. [source]

You can view that “exclusive” here. I sincerely hope he comes out clean in all this. Whew.

Subway Severs Ties With Jared Fogle After He...

I mean, they need to have probable cause to show up in his driveway looking for stuff, but let’s see if they actually find anything before we call dude a purveyor of child p*rn.

Is it bad that I’m looking at Jared and thinking that he’s gained weight?