For some reason, I’ve been craving biscuits since, like…. February. I never have all the ingredients on hand to make them, especially since I rarely keep milk on hand. But for some strange reason, I’d been getting signals from the cosmos.

Today, you will eat a biscuit. And you will rejoice.

I know this was a sign from the universe… because, for some strange reason, there was actually milk in my house!

I’m being silly, but seriously. The truth is, a few weeks ago I was watching an episode of Unique Eats, where they visit different restaurants in North America and show some of their signature dishes and how they’re made, and there was one restaurant in particular that made a cast iron chicken pot pie. Now, I don’t have a cast iron pan – yet – but I do have a smedium (yes, smedium) casserole dish that worked well enough for me, here.

Now, I think it’d be far more interesting if I talked through my thought processes in creating this dish, because if the problem is that a lot of people can’t actually cook, then learning how things are used and why they are used will help people make their own choices in what they use when they start to venture out on their own to cook. No biggie. That being said…. onward we go!

I always keep chicken stock in the fridge and freezer. Just because. When you think of everything that you cook with water – rice, quinoa, couscous, so on and so on – you can choose to use water that adds no flavor, you can add spices orrrrrr you can use a stock. Whenever we eat chicken, we save the bones. Whenever we dice veggies, we save the ends. Once there’s enough onion, carrot, celery and chicken, we make stock and freeze it.

I grab about 3 cups of chicken stock and pour it into a big pot on high heat, because I want to bring it to a boil. Half a bag of frozen carrots, half a bag of frozen peas, a third of a medium onion chopped into pieces and a celery stalk diced into small pieces all go into the pot. (At this point, I’m wishing that I had bought the frozen chopped onion too, but that’s okay.) I drop a bay leaf into the pot and swirl it all around a bit, trying to cover the bay leaf with veggies to help keep it down. Make sure you get the water to a boil, then level it off at medium heat.

In another skillet, I start to brown some chicken. It really doesn’t matter which part, because you’re going to have to shred, chop and pull it apart, anyway. The browning process is simple. All you’re doing is cooking the chicken to the point where the outermost part is turning to a nice golden brown. It doesn’t matter whether or not your chicken has skin on it, nor does it matter whether or not its dark meat…. just know that dark meat is almost always cheaper. I’d probably use that for this.

While that is browning, I pour a half of a cup of milk into the pot as well as two tablespoons of butter and two tablespoons of flour. (Making a sauce out of butter and flour is called making a roux.) The roux will help to thicken the soup and will actually cause the soup to cook a little better in the oven. The milk adds a little fat to the dish. It’ll make it more satisfying.

At this point, I add a half-teaspoon of sage, a teaspoon of tarragon, a half-teaspoon of rosemary and a half-teaspoon of thyme – all dried herbs, none of them ground, but ground would also work fine – to the soup and turn the temp down to low heat. Once the chicken is done browning, take it out and start shredding it into small pieces. You want relatively small chunks, here. Drop ’em in the pot, and let it all simmer. Grab a pinch of salt – seriously, a pinch – and sprinkle it all across the pot. Grab your pepper and add 1/4th of a teaspoon to your pot and stir it in. Put your top on your pot and leave it a little lopsided – the steam circulates inside the pot and lets it cook a little faster, while still allowing some to escape – and make sure the temperature is on low. This entire process should take about an hour.

Now… on to the fun stuff. The crust.

I don’t do a lower crust on my pot pie. I know, that makes it less of a pie and more of a chicken loaf or something, but I’d rather go hard with a top crust and skip the extra stuff on the bottom. Not my cup of tea…. or… soup.

Pre-heat your stove at 400 degrees F. Two cups of unbleached all-purpose flour, two teaspoons of baking powder, 1/2 teaspoon of salt – stir them all together in a separate bowl. Add four tablespoons of butter, and chop up the butter into the dry ingredients. You want to get the butter into pieces as small as you can. This ensures that the butter will melt in as many places as possible when your top crust begins to bake. Next, take 2 tablespoons of the liquid from the pot pie mixture and pour it into your dry ingredients. From here, you’ll slowly pour in 3/4ths of a cup of milk into your dry ingredients, a few tablespoons at a time, and stir it in. Do everything you can to get all of the dry ingredients to stick together, but you’ll wind up with some still dry on the outsides. That’s fine – just grab another tablespoon of the liquid from the soup pot and pour it down the sides of the bowl and stir it in to stick to the big mound of dough in the center.

Grab your baking dish, and slowly pour your soup inside. Use a ladle to scoop it in there. As you’re pouring, look for the bay leaf and take it out. Using a spoon, take big scoopfuls of your dough and start forming medium-sized balls to place on top of your soup in your baking dish. You want to align them next to each other. Little spaces are okay because the dough will expand and rise as it bakes. Cover the entire top of the dish with dough. If you – for some reason – run out of dough, just grab a few of the balls out of the dish and pull them to expand a little more.

Bake the entire dish for approximately 15 minutes, then start watching it closely. You want the top to be a nice golden brown, just before the tops begin to burn, because you want to make sure the center of the dough is properly cooked through. Before you know it? 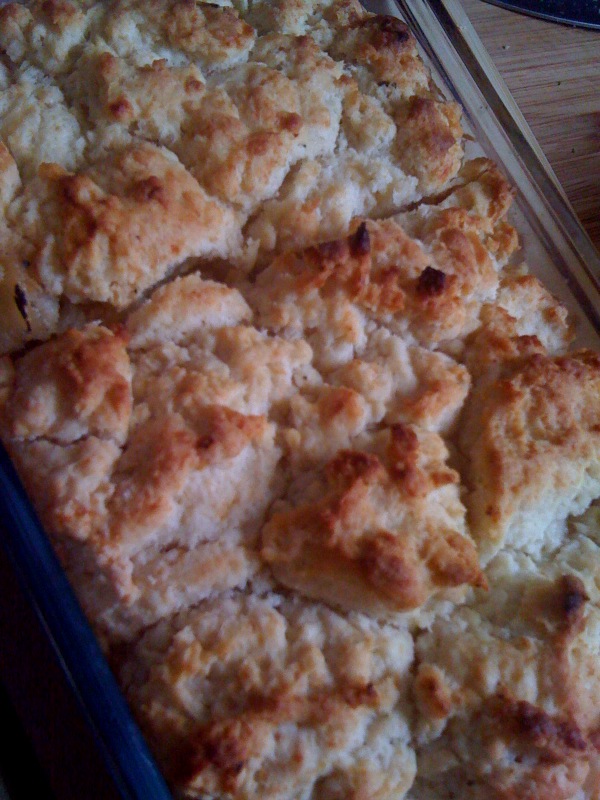 Want to make this vegetarian? Skip the chicken!

Infographic: How Much Sugar Is In Your Favorite Foods?

How To Dine With Nutrition In Mind

I love the idea of adding some of the soup to the dough. I’ve never thought of that before. Looks & sounds delicious!!

Think I will try this on Sunday, sounds delish. Was never a fan as a kid, my mom bought the frozen ones, but this sounds great.

This looks awesome. I’ve made pot pie, but I always use store bought pie crust. I may have to give this a try.

I made this and it came out great! I happened to have all of the ingredients in my house, and was feeling a little under the weather. It turned out perfect.

Al I had was enriched bleached flour so I had to use that. I came out REALLY good! Thanks so much!

Recipes and beautiful food photos like this force me to put away all my lame excuses for not trying new recipes: NY’ers don’t cook/kitchen too small/no counter space/how am i gonna roll out the dough/can i use Bisquick instead, etc. I even have a lovely cast iron skillet bought on sale so I’m really looking forward to impressing myself this weekend– thanks so much for this!

How long are you supposed to do this part for? The simmering?

“Drop ‘em in the pot, and let it all simmer. Grab a pinch of salt – seriously, a pinch – and sprinkle it all across the pot. Grab your pepper and add 1/4th of a teaspoon to your pot and stir it in. Put your top on your pot and leave it a little lopsided – the steam circulates inside the pot and lets it cook a little faster, while still allowing some to escape – and make sure the temperature is on low.”

Im guessing you just let it just simmer while you make the dough?

I made this tonight. It was soooo good. My crust didn’t look as pretty as yours, but I used white whole wheat flour. I also sub’d corn for the peas, cause I didn’t have any. The whole family loved it.

We’re having a cold snap and I’m thinking I need this in my life!
I’m going to try it w/organic chicken broth and no meat, just all veggies!
Thanks for the recipe.

I have mine cooking in the oven right now and it looks and smells SO good! I can’t wait to dive in! Thank you so much for sharing. Will definitely be making this again! 🙂

I’ll be making this one on the weekend, mmm mmmmm can’t wait.
I’ve never made a pie like this before, so I look forward to it. Just hope I don’t mess it up.

So I LOVE this recipe. It’s in the oven now. As I was making the biscuits, I was wondering if I could use this to make biscuits on their own. How would that work? Would I just substitute some stock for the soup and drop the dough on a pan at 400 (similar to your cheddar bay biscuit recipe)?

You could – this is actually a recipe for drop biscuits (not to be confused with buttermilk biscuits, which usually require rolling and cutting.)