How One Recipe Turned Me Into a Spice Goddess

In the very first cookbook Eddy bought me, was a little recipe for chicken and rice, Indian-style. I’d only had Indian food once before – a channa masala that is quite possibly its own story – but it felt risky. Going from bland food to food with all the flavors in the cabinet all at once felt like too much of a challenge on its own.

The recipe didn’t look particularly appetizing, and the picture didn’t make it look very appealing, but it was chicken and rice. It didn’t require an arm and a leg’s worth of vegetables to make it happen, it was full of spice (and flavor), and it had chicken. It won.

It did, however, require what felt like half the kitchen cabinet’s worth of spices. 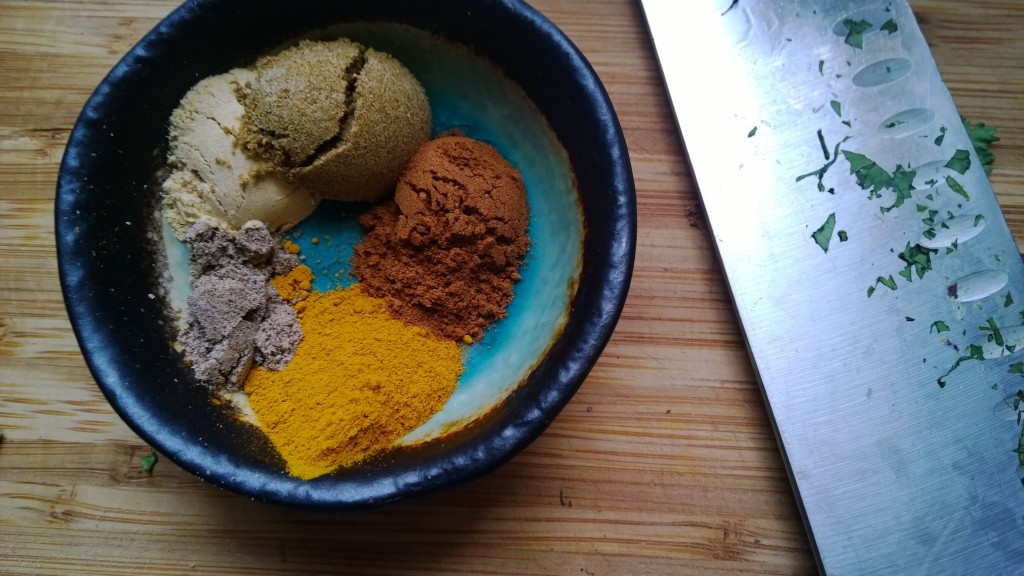 It called for a blend of spices that I’d never even considered combining together – a teaspoon of turmeric, a tablespoon of cumin, a teaspoon of ginger, half a teaspoon of cardamom, a pinch of cloves, and a half-teaspoon of cinnamon – alongside a healthy dose of salt to help bring out the flavor.

I hadn’t combined spices like this before, but was today going to be the day? What the hey, why not? If it was awful, at least I’d only be out a bit of rice and a few pieces of chicken. 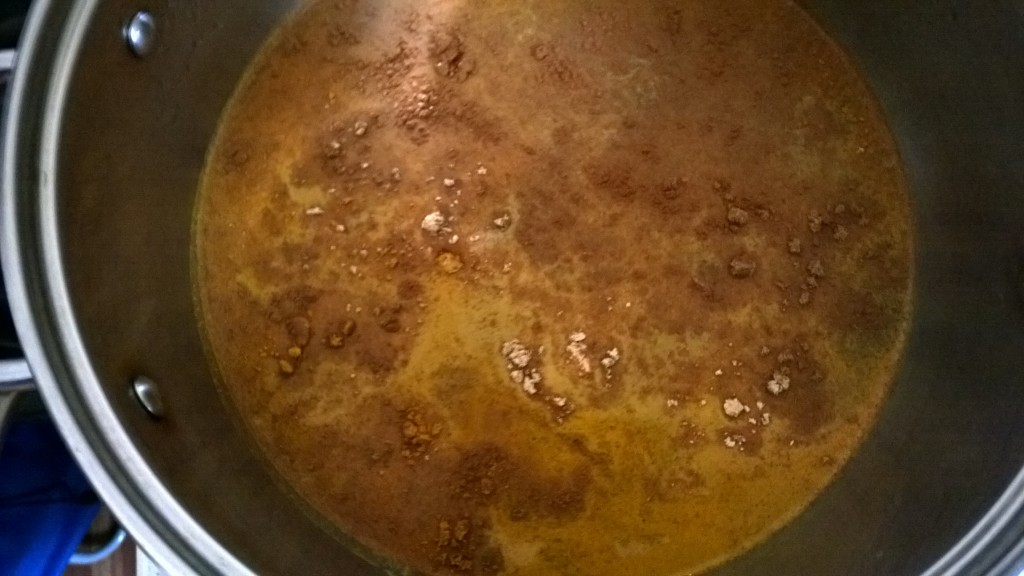 For the rice, I kept it simple. For my basmati rice, I prepped water for two cups of dried rice. All of those spices? Dump them in the water, and stir it with a whisk (or a fork). Once my spices were neatly stirred in my pot (that photo above is certainly not “neatly stirred,” but we gon’ be aight), I brought my water to a full boil. 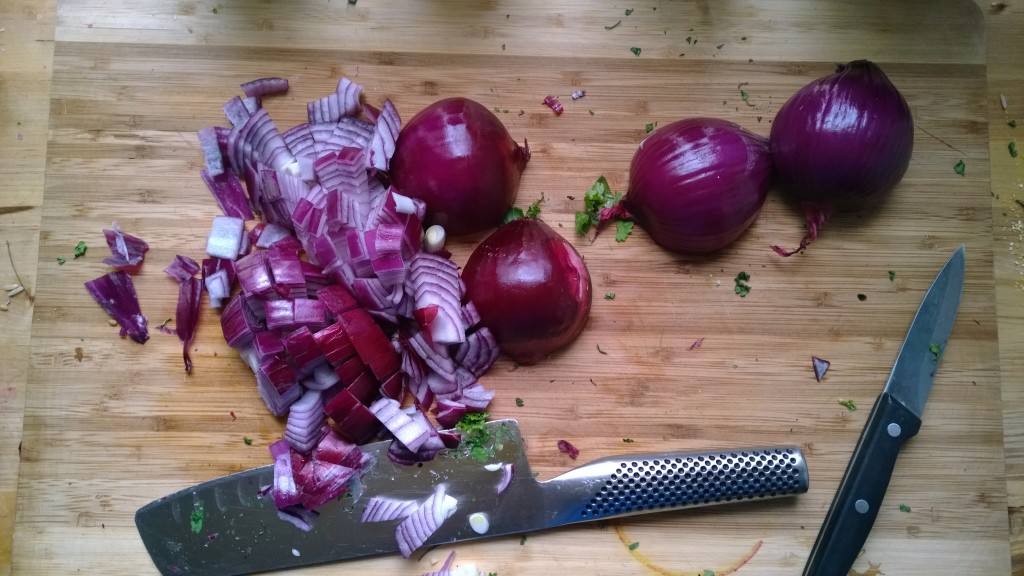 From there, I took two medium red onions, halved them, and then proceeded to dice them into nice-sized chunks. In a skillet large enough to accommodate six pieces of chicken, I put my onions inside with a tablespoon of walnut oil shaken with three tablespoons of lemon juice, just enough to soften the onions and take out the “kick.”

Once the onions are softened, I added three cloves worth of minced garlic… 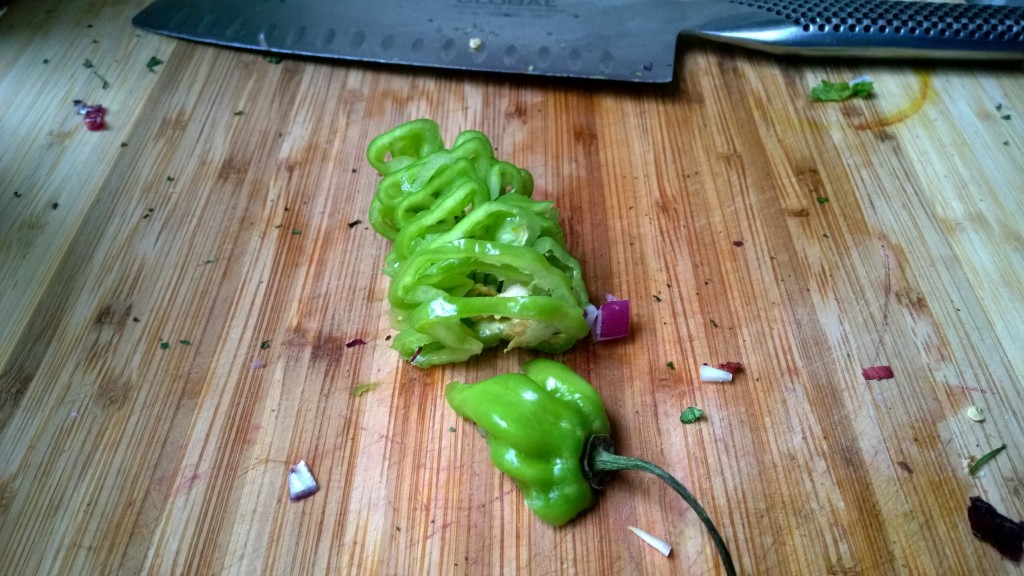 …and this guy. I don’t even remember what to call it. In my house, it’s just a “hot-as-hell pepper.” Trying to think of its name brings back memories so damning that they render you mentally useless.

This hot-as-hell pepper adds a nice kick to your mix-up, but if you’re spice-resistant, only use half. Add that to your skillet. 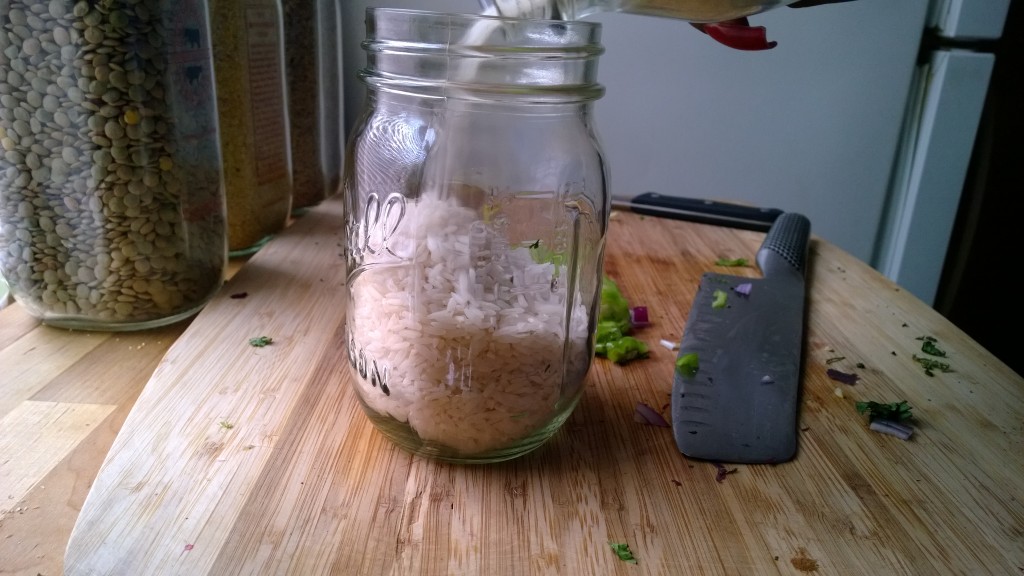 By now, your water for your rice should be nice and hot. Go ahead and toss that rice in there, and cook it according to your instructions. 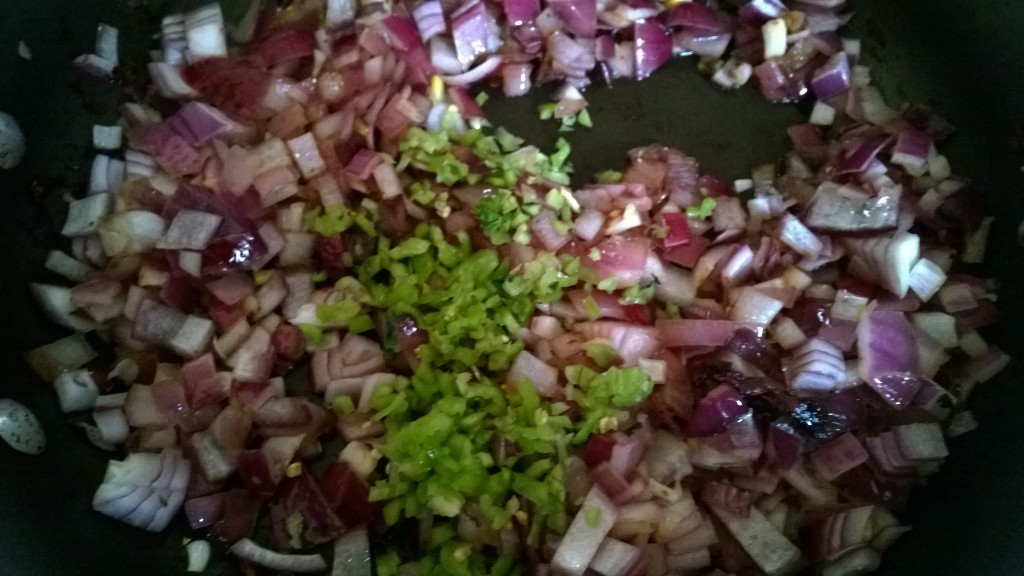 This is what your onion, garlic and hot-as-hell pepper blend should look like. Sprinkle a bit of salt over the skillet at this point. Mmmm, yumminess follows. 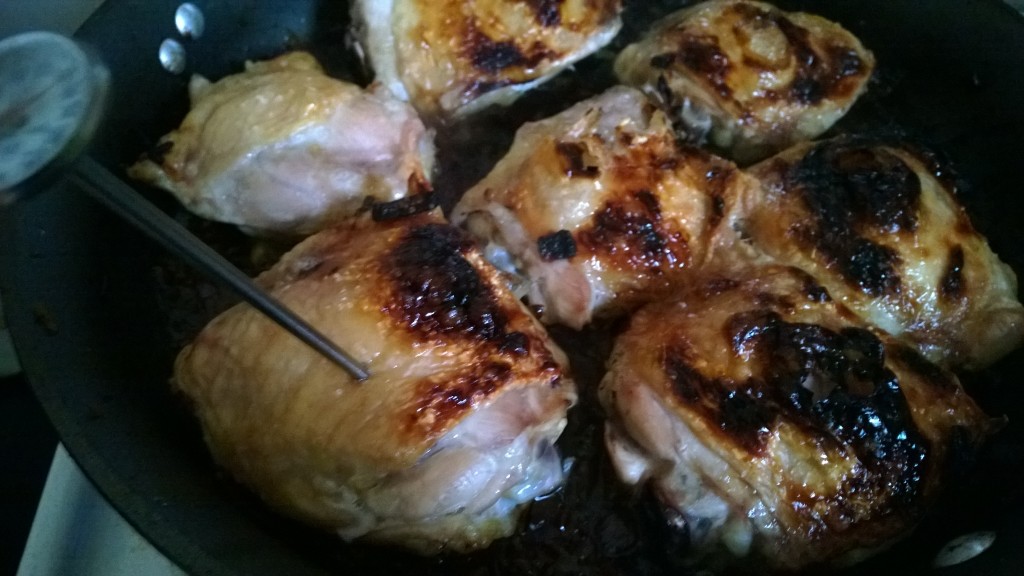 Cook your chicken according to the rules. Skin-side down first, medium heat, turn it right-side up after approximately 10 minutes, check your temperature.

165 is the goal. You can always, of course, shoot it by sight alone, as most of us do with cooking chicken, alas… if you’re new to it, that thermometer (pictured sticking out of the chicken above) is your safest bet.

If you’re feeling fancy, stick your chicken skillet in the broiler for a few minutes after you’ve turned it so that the skin-side is facing up. It’ll crisp up the top of the skin quite nicely, and finish off the cooking process for the chicken, as well. 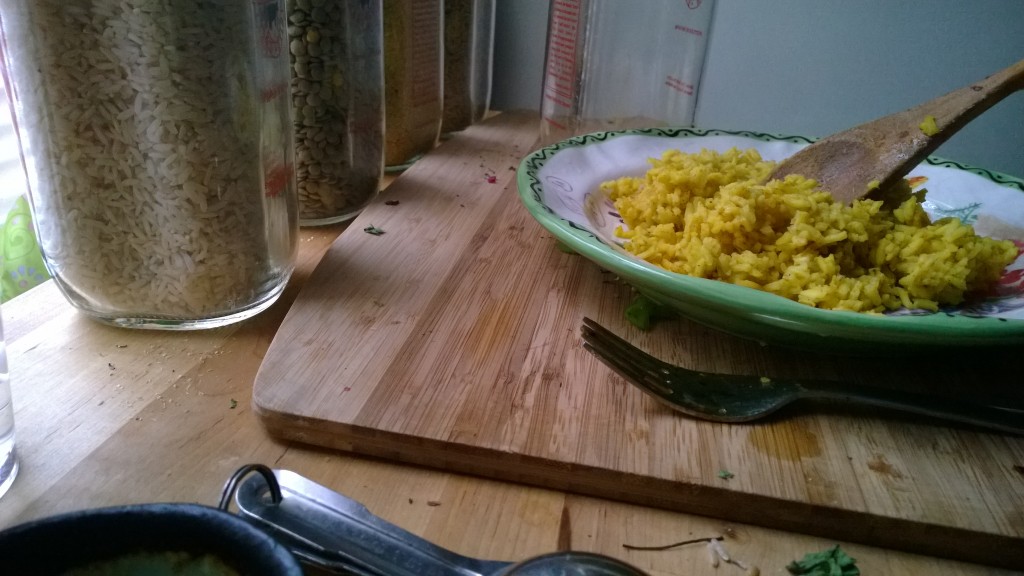 Once your rice is complete, it should have a lovely yellow tint to it. You can thank the turmeric for that. I know turmeric’s kind of a buzz word lately, but it’s for good reason – turmeric, in consistent and regular doses, can help you fight inflammation (which is basically another word for pain) and can improve the health of your liver. Anyone who’s training on a regular basis could stand to benefit from anything that’s going to help with pain-prevention in a natural fashion. 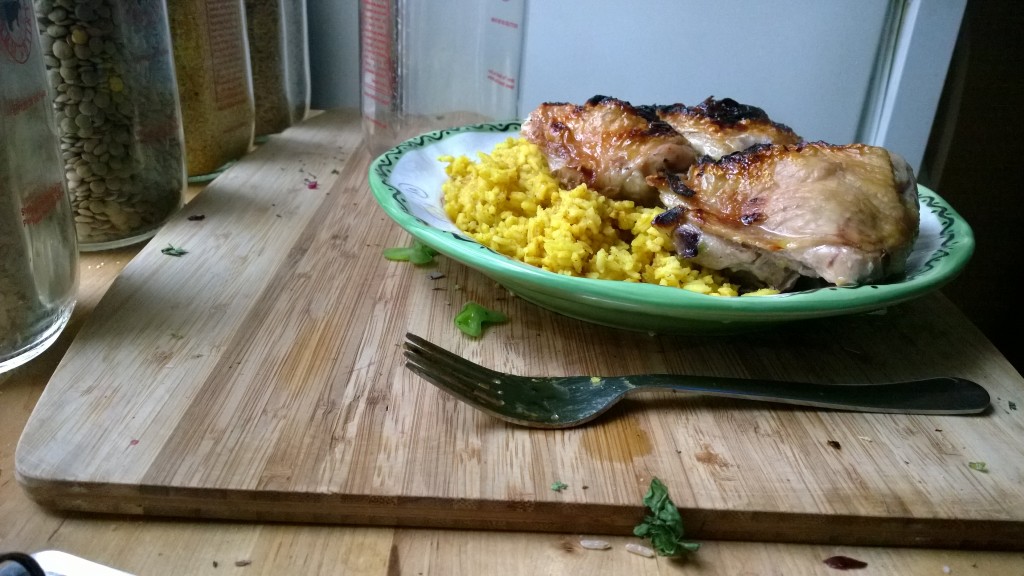 Top off your rice with your chicken. From here, it’s up to you to determine whether or not you want this onion, jalapeno and garlic mixture on top of your plate. (I always get a little bit, myself. It’s delicious.) 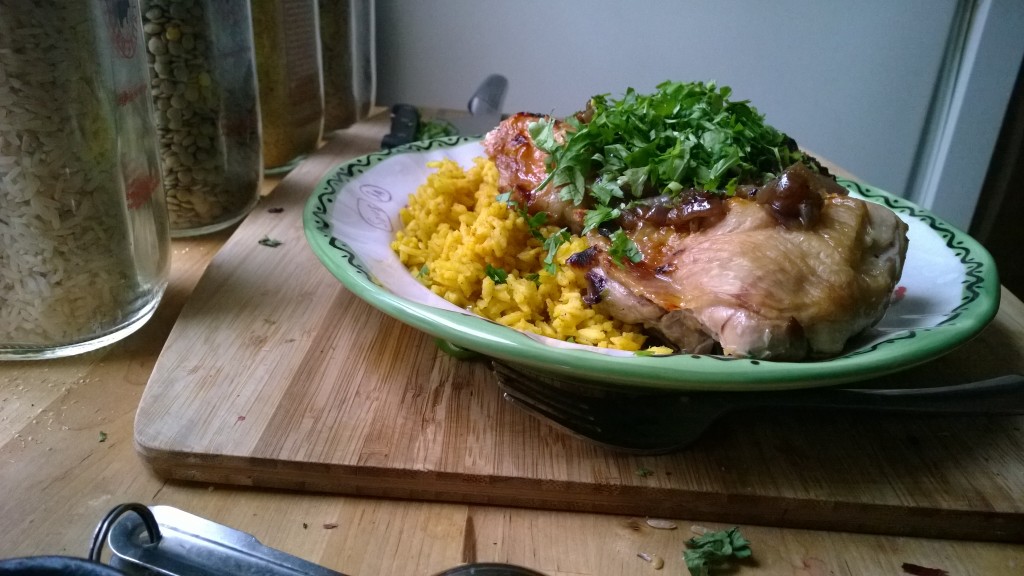 And, the pièce de résistance… a giant handful of cilantro! 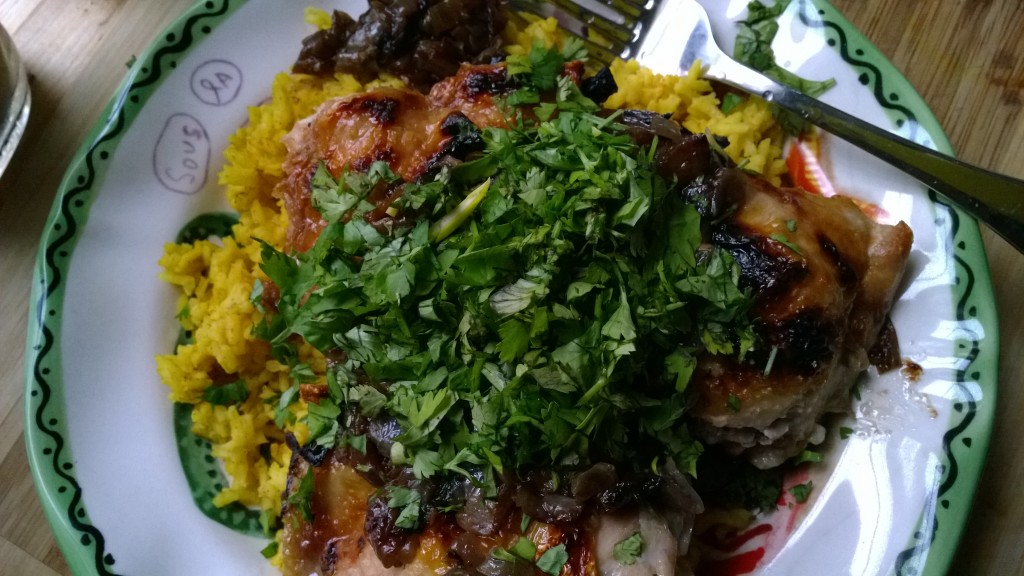 And, just like that, I learned the value of exploring the spice cabinet and not being afraid to try out what feels like “weird” or, more accurately described, unfamiliar combinations. Now, I’m a spice goddess – intentionally blending spices, adding a bit here and tweaking a bit there all for the sake of flavor, just because I was willing to do that initial exploration. It’s rare that they turn out terrible – just about anything can be leveled out, and more often than not a little salt can make everything right.

Well, that and cilantro. Huge, giant, mounds of it.

Awesome! I looooove Indian food. Thanks for sharing. 🙂

Is that “hot as hell pepper”, scotch bonnet peppers? This recipe sounds amazing! I have to try it

LOL Yes! The market I buy them from has only identified them as “Jamaican peppers,” strangely enough.

A pinch of cloves? Ground cloves or whole??

Every spice that goes into the rice is ground, nothing whole. Thanks for helping me make that clearer! 🙂

Looks delish if I could do a substitute for the rice ( I’m not eating rice) basmati was my favorite !!

Wow, I’m almost afraid to try it. I have been looking for different things to flavor my foods with besides Season All…I’ll give it a shot though and see what happens!

Love this! I’m obsessed with spices…such an overlooked source of great nutrients.

I have a question: did you cook thighs in this recipe?