If you’ll recall, this past summer, I was so overwhelmed by the athleticism and the overall awesomeness of the athletes competing in the Olympics. Having a different understanding of the capabilities of the body and then getting to watch these athletes take that to such an extreme… it really serves as a testament to the power of the human body.

In other words… I’m still kind of in awe.

But I became curious. If I’m just now becoming interested in athleticism… who have I missed? Whose legendary stories have I not heard? Whose stories am I ignorant about, and need to know?

Basically, there are some triple-oh-gee (sorry) athletes that are not only inspiring, but overall bosses in their field. Both you and I need to know them. And, if you already knew them, then let me remind you. 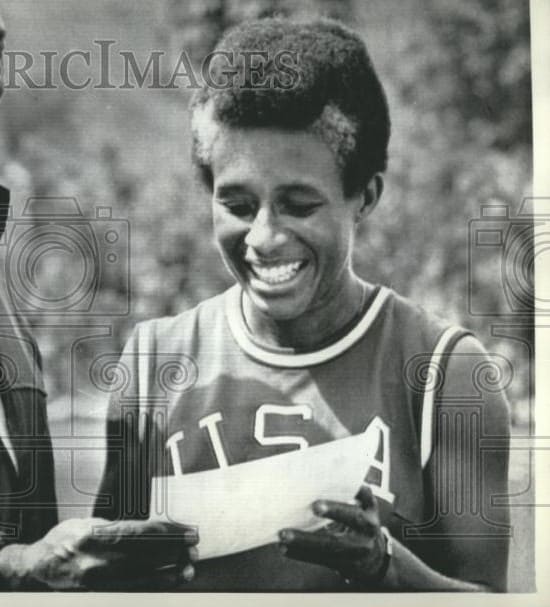 Elusive, though she may be, the community in Chicago that thought her deserving of eternal acknowledgement made sure to prominently display a snapshot of her in action: 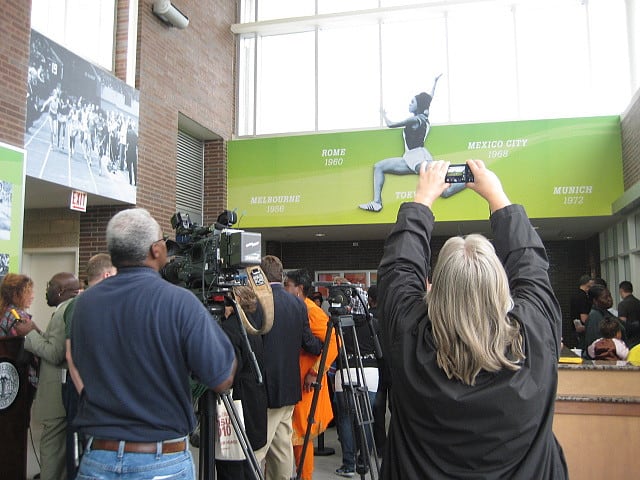 White has the distinct honor of being “the first American track and field athlete to compete in five straight Olympics, from 1956 to 1972.” Having the same coach as Wilma Rudolph, White went on to win silver medals in 1956 and 1964, and also take the gold in the long jump in 1963’s Sao Paulo games. That 1956 silver, in Melbourne, was the first time an American woman ever medaled in that event.

There wasn’t much information about White on the Internets, but I’m sure the Schomburg has tons of information on her. I’m just morally opposed to going all the way up to Harlem to get it. 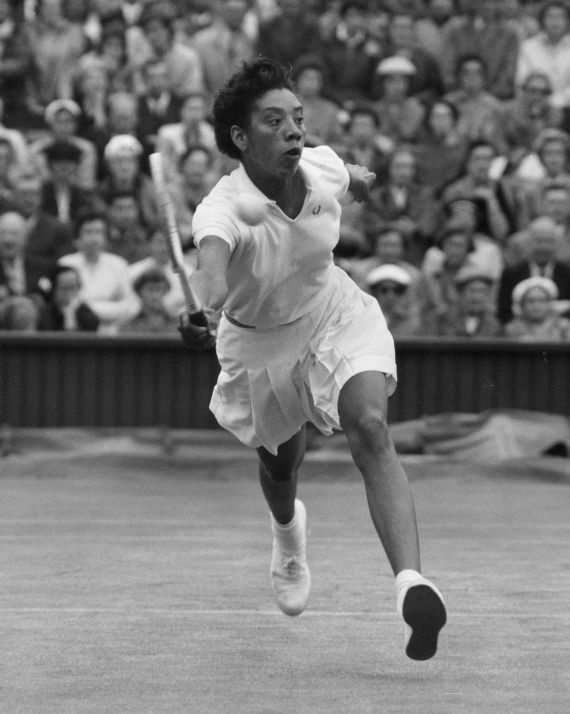 Do you see that reach? Gibson began her tennis career in the late 1940s as a teen in North Carolina, and continued throughout her time at Florida A&M University, where she graduated in 1953. 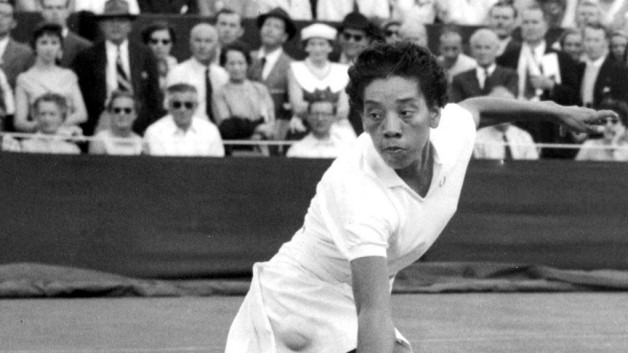 Gibson won the French Open in 1956, making her the first Black woman to win a major. She would later go on to win both Wimbledon and the US National Championships twice in both 1957 and ’57. 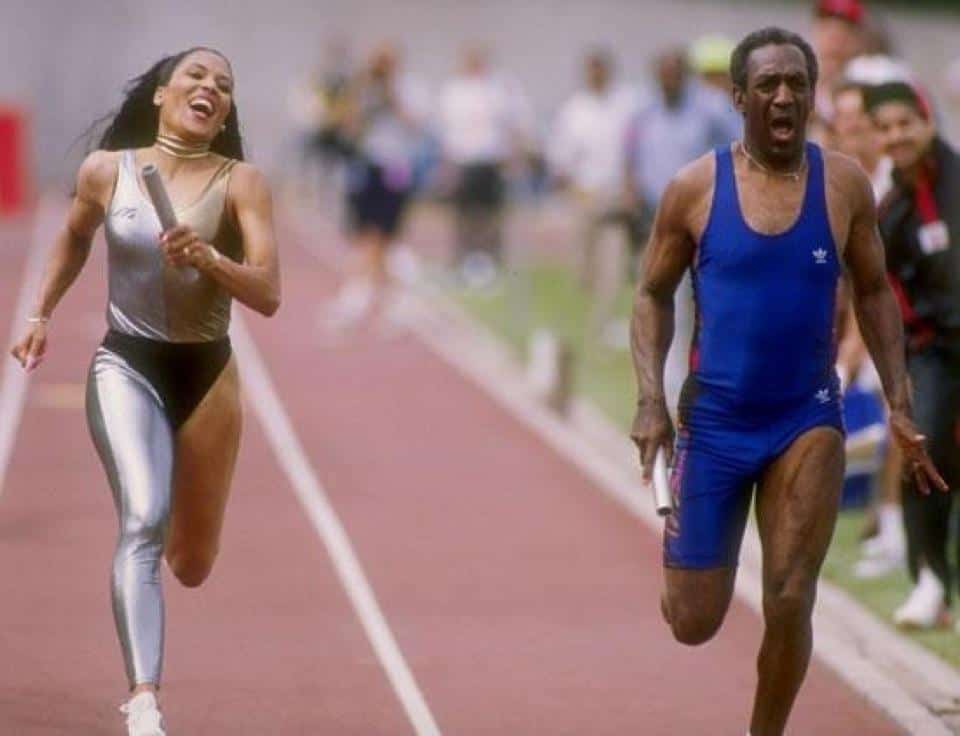 Kinda just wanted an opportunity to laugh at Bill Cosby in a onesie. 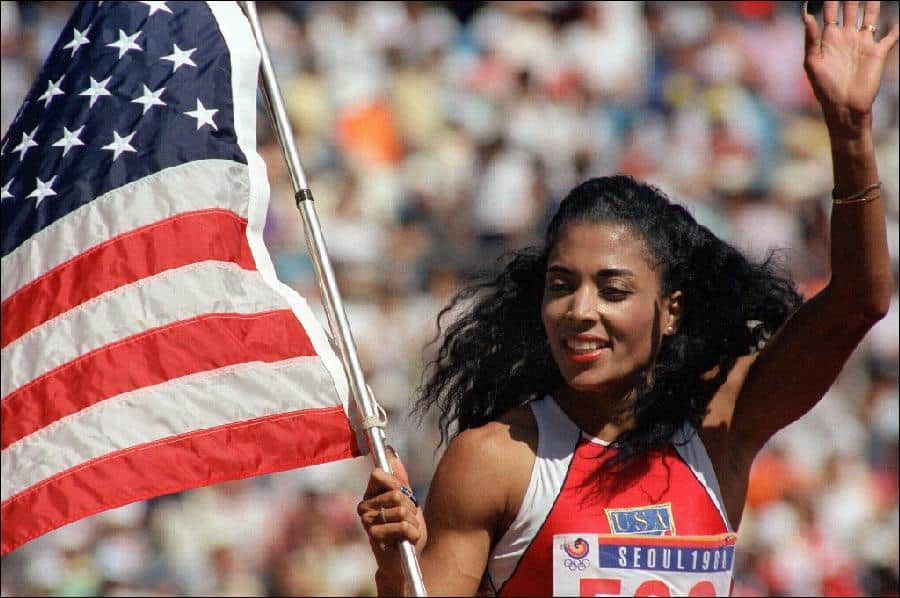 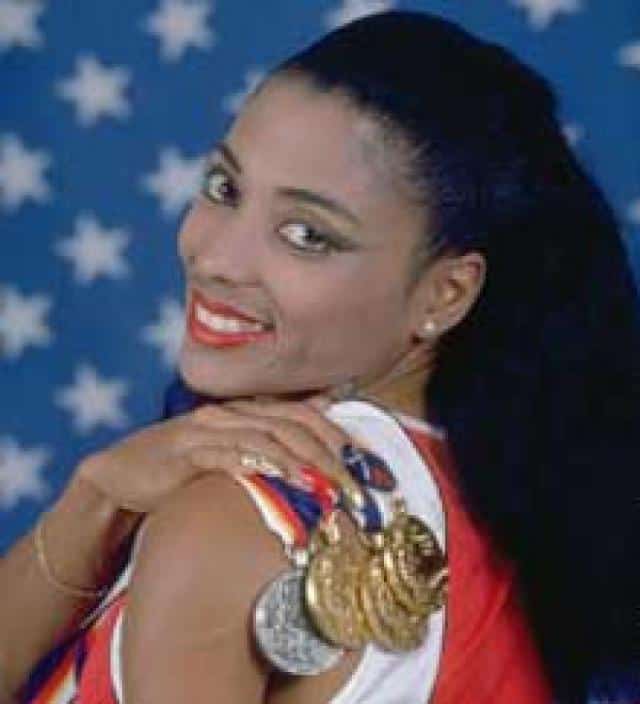 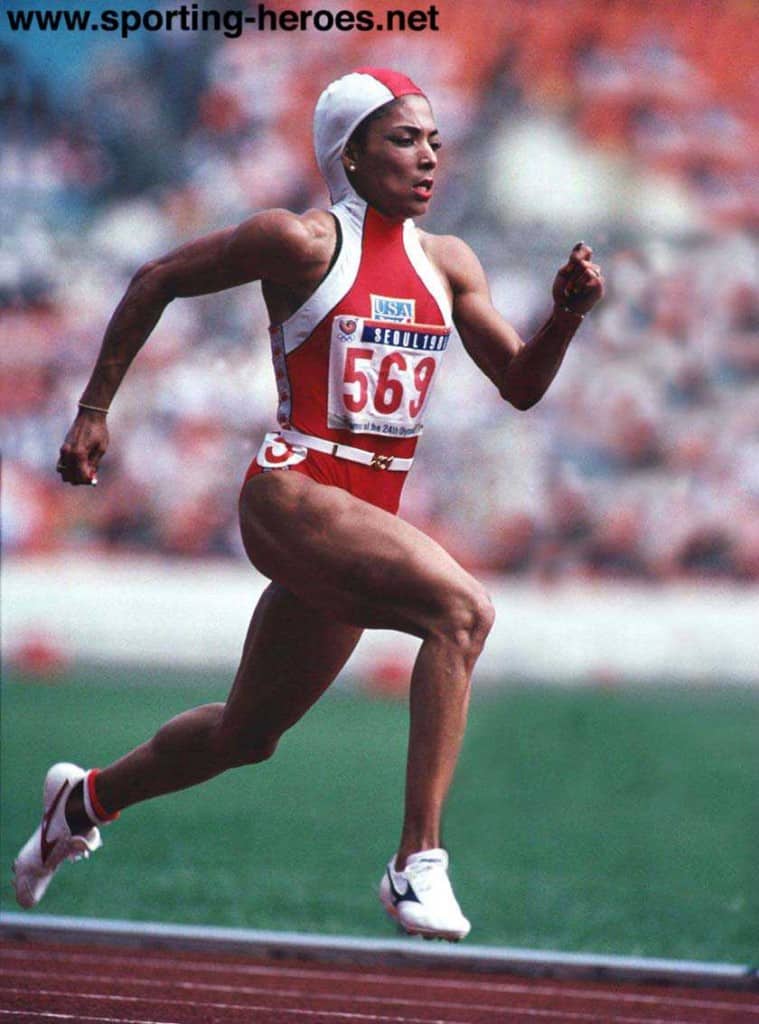 The fastest woman of all time. 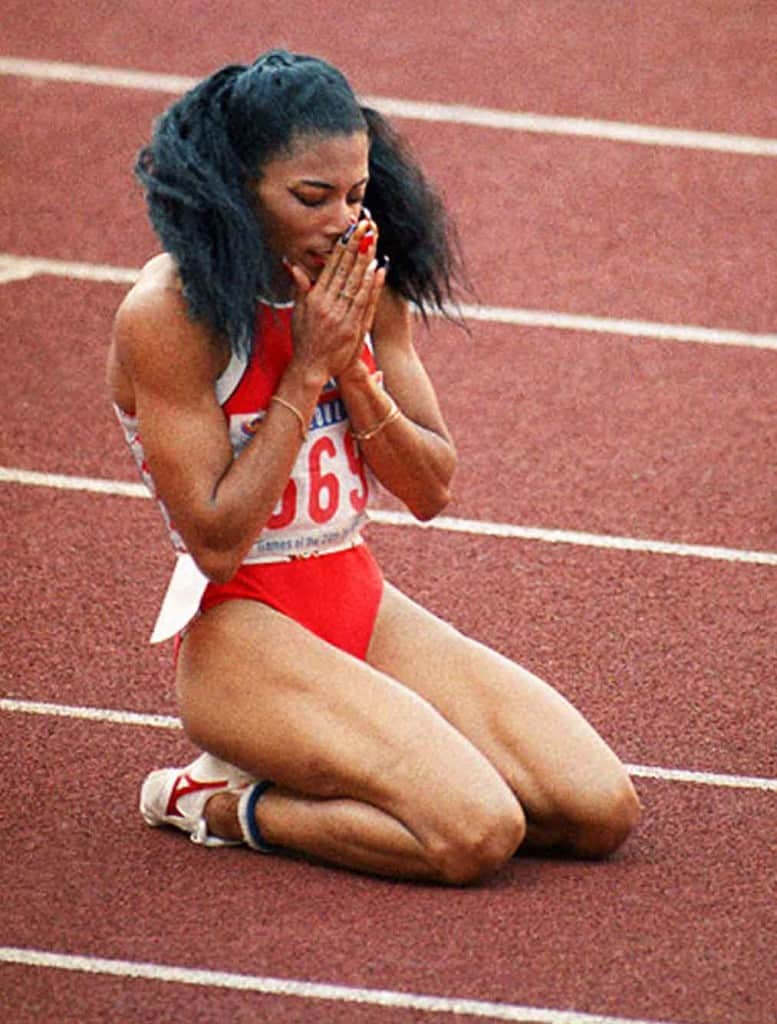 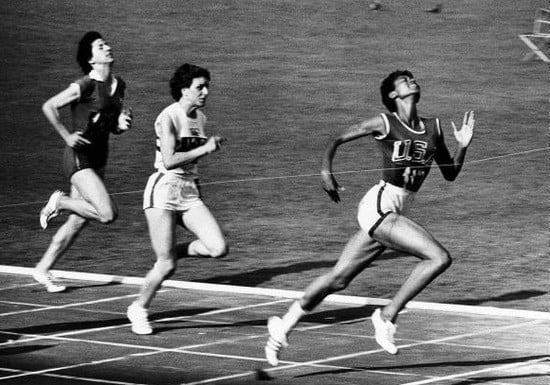 Wilma Rudolph is all legs. Do you see that? Do you see the struggle and the pain in the faces of their competitors, crushed that La Gazzella Negra is crushing them? 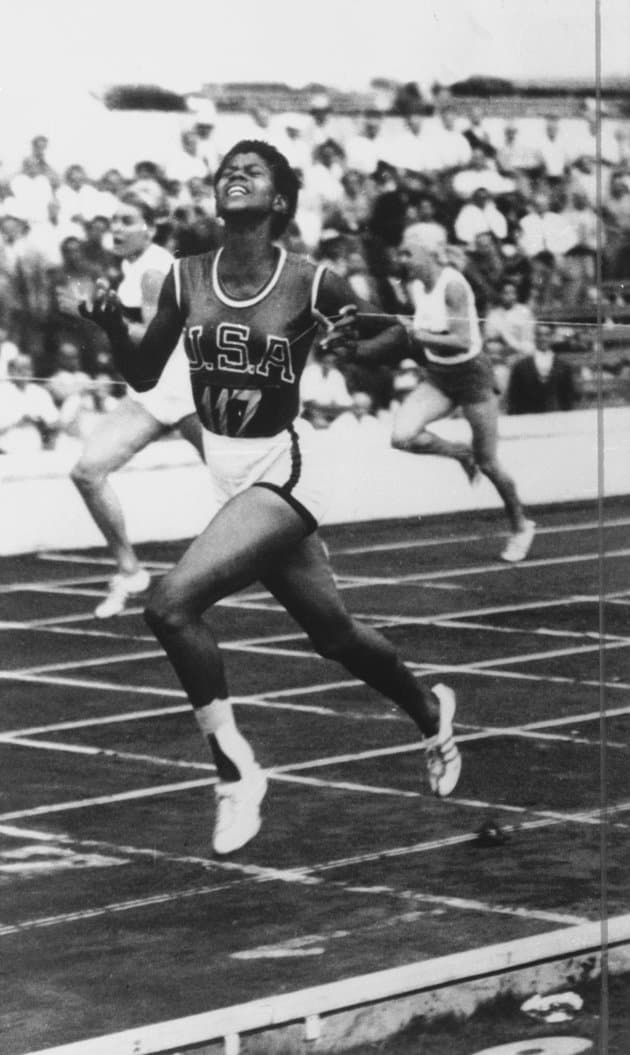 Wilma’s story is exceptional because she fought both polio and paralysis (due to her polio) as a child. After spending much of her adolescence in a leg brace and orthopaedic shoes, her family moved her to Nashville where Fisk University’s med school could help her develop the ability to walk and run like the athlete we know her to be, today. Before long, she’d become a high school basketball star and was soon discovered for her running talents. By the age of 20 Rudolph found herself competing in Rome, for the 1960 Summer Olympics, eventually becoming the first American woman to win [not one, not two, but] three Gold medals… 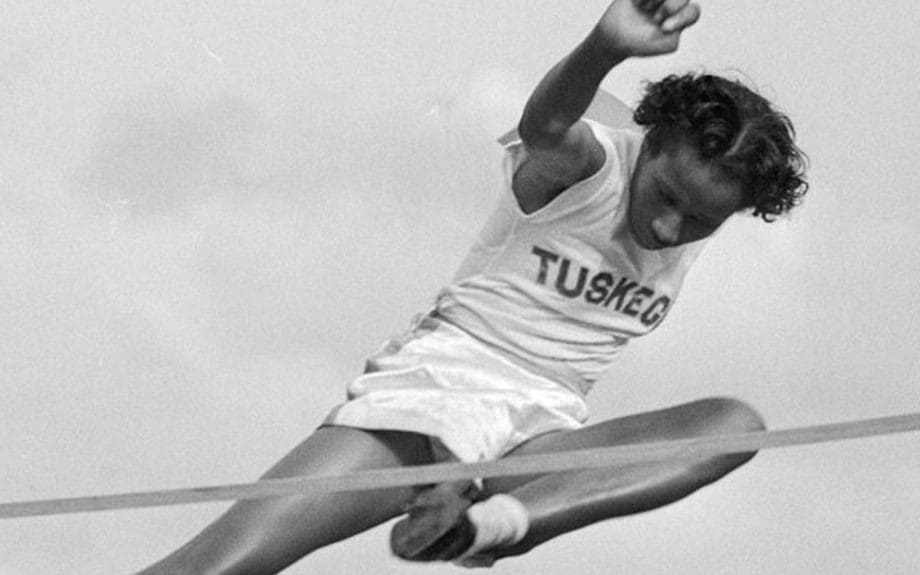 Coachman, nee 1923, has the distinct honor of being the first black woman to win an Olympic gold medal, and was the only woman to medal at all in this particular year’s Olympic games. And she did it at age 25. 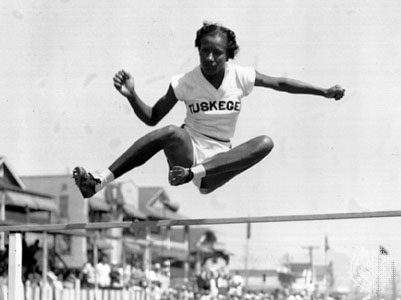 I’ll provide you a towel to set on the floor, so that you don’t scuff your pants as you bow to her dopeness.

So, share. Who else deserves praise? Who else’s story needs to be told? Give me a reason to go to the Schomburg, y’all. I dare you.

What’s Going On With Your Orange Juice? Round II

Forget about all that worldstar twerkin trash..these a REAL women

Thanks for acknowledging these ladies who were definitely fit chicks, and were getting their fitness before it was popular 🙂

Flo Jo is my fitspiration! I wanna be cut up like that! Also, when I was a kid, her nails were EVERYTHING!! Dig how she always ran in FULL makeup!

Thank you for this outstanding lesson! Quick question, Why are you “morally opposed to going all the way up to Harlem to get it?” What’s the moral opposition? LOL

Too far, man. Harlem is too ding dang far. I gotta cross two bridges, a river, get on horseback and cross the desert, catch a flight and hail a cab. I’m not here for all that travel. LOLOL

LOL. How do you sound? Sounds like somebody needs to learn the A and D lines and not spend their life waitin’ for the G. 🙂

(Met Ms. Rudolph. Still all legs. Bananas. Owned the room when she walked in. Made me feel really bad about whining ’bout getting to the gym on a working girl’s schedule.)

Erika, I’m co-signing with Roo. Girl, get your booty on the right trains and get uptown. We’re waiting for you! The 2 and 3 trains will get you directly in front of the Schomberg at the 135th Street station. You will be rewarded with Wilma/Flo Jo legs for your efforts. 🙂

I went to the gym on Thursday and I’m still sore 3 days later after performing some basic cardio (smh). I’ve been inconsistent with my workouts and it shows. I looked at this post about these Olympians and I’m ashamed of myself. I am placing this post on my desk at work and putting it in my gym bag to motivate my tired behind. These Queens are the original Grandmasters!

Y’all playin’. I ain’t here for that commute. Not here for it! ROFL!

LOL. If we can come down on the 2 & 3 for some kul-cha on First Saturday, I know y’all can come up for an early PF workout and then go right across the street for low carb brunch (chicken sausage and greens mm-HMM) at Marcus’, don’t front. Erica has even given the straight route!
You don’t hear her though. 😀

Yea, that sure was a straight route. ROFL. Last time I was at Red Rooster, the bill was… let’s just say it was offensive. ROFL

Excellent post! I looked up to ALL of these women growing up!! It is funny that most of these women run track – that should say something to folks that want to get or keep fit!

That was awesome! Thanks Erica

Let me add another one:

Was reading the piece on parsnips and migrated over to this post. While I love my alma mater, Fisk doesn’t have, nor has it had, a medical college. I think the Black medical college that she would have been treated at would have been Meharry Medical College which is directly across the street from Fisk but isn’t really a part of the university. There are several joint programs to produce more African American medical professionals but as much history as we had to learn about Fisk I don’t think they would have left that part out. I could be wrong but I can’t find any link to Fisk ever owning Meharry in any public history for either university. I can see why folks would think they are linked though they are LITERALLY across the street from each other.

This is where that came from. So it was Meharry, not Fisk? Consider it changed, but yikes.

Yeah I saw it there and on a library page but Fisk, as wonderful and fantastic as it is, doesn’t have a medical school. We talked about other things that disappeared–like the football team–but never a medical school lol. Maybe Fisk had some authority over it at some point–they weren’t founded that far apart–but no one is mentioning it. And Meharry is stellar in it’s own right so it should be recognized as well.