Home Health News What’s Going On With Your Orange Juice? Round II

What’s Going On With Your Orange Juice? Round II

So… this is really happening: 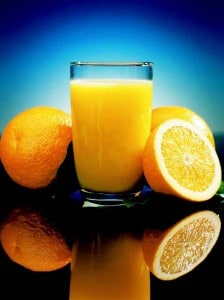 FDA officials said they aren’t concerned about the safety of the juice but will increase testing to make sure the contamination isn’t a problem.

In a letter to the juice industry Monday, the agency said that an unnamed juice company contacted FDA in late December and said it had detected low levels of the fungicide carbendazim in the company’s own orange juice and also in its competitors’ juice.

Fungicides are used to control fungi or fungal spores in agriculture.

The United States has not established a maximum residue level for carbendazim in oranges. In the letter to the Juice Products Association, FDA official Nega Beru said the agency will begin testing shipments of orange juice at the border and will detain any that contain traces of the chemical.

Because it is not approved for use in the United States, any amount found in food is illegal.

Beru said that because the FDA doesn’t believe the levels of residue are harmful, the agency won’t remove any juice currently on store shelves.

But he asked the industry to ensure that suppliers in Brazil and elsewhere stop using the fungicide.

“If the agency identifies orange juice with carbendazim at levels that present a public health risk, it will alert the public and take the necessary action to ensure that the product is removed from the market,” he said.

So…do I have this right? The government doesn’t have standards for the fungicide, doesn’t test for it, has it (by definition) considered illegal for use in our supply, and are currently requesting that the industry ensure that Brazilian suppliers cease using it… and none of this is reason enough to pull it off the shelves? I guess that’s too much of an inconvenience to the manufacturers, eh?

Yeah, and the absence of evidence is the evidence of absence… or something. Yeesh.

Q&A Wednesday: What Happens When You Regress From Clean Eating?

I saw this last night and then the two updates this morning. I just shook my head. That’s reason number 187 on why avoiding processed foods AND juices are better for you.

SInce they aren’t saying which manufacturers were potentially affected, I guess all those “Florida Oranges” should be considered suspect too.

Honestly, this is so ridiculous already! I’m really starting to get mad as all hail! Besides the horrible fact that I’ve been on an orange juice binge lately *rolls eyes/cringes*, I was just thinking about this kind of stuff. I was researching cancer rates in the US, and how they just keep rising. When is someone going to be for the people? When will big business NOT win out when it comes to human health and well-being? Sorry, I’m just getting really mad about all of this lately!! Like another commenter said, it’s probably a problem in some of the big brand names, and that’s why they’re not pulling it or saying anything. I just, I can’t even right now…

If I wasn’t turned off by the copious amounts of sugar in orange just, this how now pushed me over the edge. I’ve loved orange juice for most of my life, I love myself more. The good thing is that I no longer have to spend all that money on it anymore.