Y’all, this is unfathomable.

Under no circumstances are these pictures safe for work…or your soul, for that matter.

Andressa Urach, 27, spent a month in intensive care and feared she would lose her leg after fillers ‘rotted’ her muscles and had to be removed, triggering a life-threatening infection.
[…]

Miss Urach […] has reportedly undergone at least nine cosmetic procedures in the past five years.

They were said to have included a nose job, a bioplasty facial ‘correction’, jaw reduction, breast enlargement, liposuction and even vaginal lip reduction.

Most important of all was her prized rear. It won her the runner-up title in the 2012 Miss BumBum contest, which aims to find Brazil’s most attractive bottom.

She reportedly had injections of two filers, hydrogel and PMMA, to make it larger and more plump. 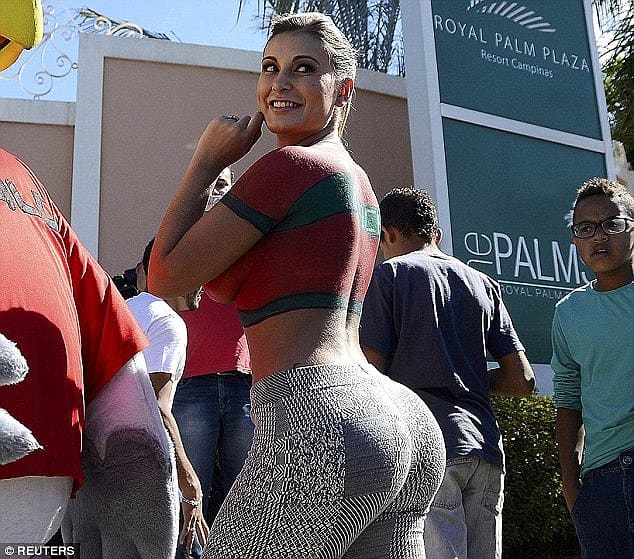 But in July she began complaining of discomfort and had 400ml of hydrogel drained from each of her upper thighs.

She told Brazil’s R7 website at the time: ‘The hydrogel was not absorbed by my body and started to harm me.

‘Now I’ve discovered that the PMMA is sticking to my muscles and causing the tissue to rot.

Despite the operation, she continued to be in pain and in November she was taken to the Conceicao Hospital in Porto Alegre with an advanced infection of her left leg.

She underwent two unsuccessful drainage procedures, according to reports, before suffering from septic shock and being moved to intensive care.

At one point her life was in danger and it was claimed her leg could have had to be amputated.

Her mother Marisete De Favari logged in to her Twitter account, asking the model’s 220,000 followers to pray for her as she remained on the ward in a serious state.

‘I would ask for prayers from friends and people who wish for the recovery of my daughter,’ she wrote on December 10.

‘She’s starting to walk, put her foot down and sit. After all this time lying down, she expected it would be painful. She has been taking morphine since entering the hospital, but now they are taking the drugs away from her gradually.

‘As she had sepsis, healing will be slow, because it has to happen in a natural way so that it is not subject to a new infection.

‘This takes time and she is assisted by doctors all the time. She has had no contact with anyone but the doctors and her mother.’

The model added on December 26: ‘My loves, thank you for the affection and chains of prayers. God is great and is taking care of me.’

‘Sometimes we would agree to do some procedure together, we were not afraid.

‘We were slaves to beauty.’ [source]

I want to talk to you about this, because there are some parts of this that are just mind-numbing to me.

Miss Urach […] has reportedly undergone at least nine cosmetic procedures in the past five years.

They were said to have included a nose job, a bioplasty facial ‘correction’, jaw reduction, breast enlargement, liposuction and even vaginal lip reduction.

She has undergone breast enlargement, liposuction, and booty enlargement procedures. Hundreds of thousands of people follow her, admiring her photos – mostly of herself – of a figure that she didn’t develop naturally, it required surgery to accomplish. 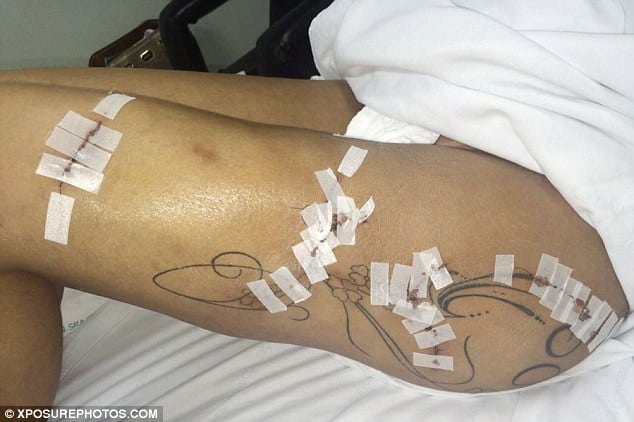 And, while people may follow her for her brains and what she has to say, it’s also likely that people are following her to look at her body. My question is, what happens when we see these images? Do we feel the same sense of “inadequacy” we feel when we see them in magazines? Not only are some of the photos on her account airbrushed, but they’re photos of a woman with breast implants, a liposuctioned midsection, and booty implants. Is this screwing with anyone’s self-esteem? Do they ever stop for a moment and consider that perhaps it shouldn’t, because she may be “surgically gifted” as opposed to “naturally gifted?”

Instagram is a less-filtered (pardon the pun) space than, say, the pages of a magazine. We’re more likely to trust what we see there. We never think about all the people who photoshop their photos before they send them back to their phone and upload. We never think about all the people who’ve had multiple surgeries to look the way they do. We just know they’re real, and in front of us, and uploading photos for our entertainment. Does this shift the way we set our goals? Does this shift our expectations?

I’m not interested in snarking her in her time of suffering, but I am curious. She entered what appears to be a relatively new yet widely-known contest, with a fake derriere, in order to win a prize worth the equivalent of ~$20,000. Are women simply just supposed to have large booties in order to be a contender? What about them being natural?

This is something for all of us to think about when we watch pageants – how much of what we see is real, homegrown, natural? If the answer is “very little,” should we let it affect our self-esteem in the way that we do?

She told Brazil’s R7 website at the time: ‘The hydrogel was not absorbed by my body and started to harm me.

‘Now I’ve discovered that the PMMA is sticking to my muscles and causing the tissue to rot. [source]

It is this, for this exact reason, that compels me to believe there is no safe form of “booty injection.” If the PMMA was sticking to her muscles, that means it was likely impeding the muscles’ ability to receive fluids (water, blood) and that facilitated the rotting. If the hydrogel wasn’t absorbed by her body, where did it go? What did it do to her other organs? 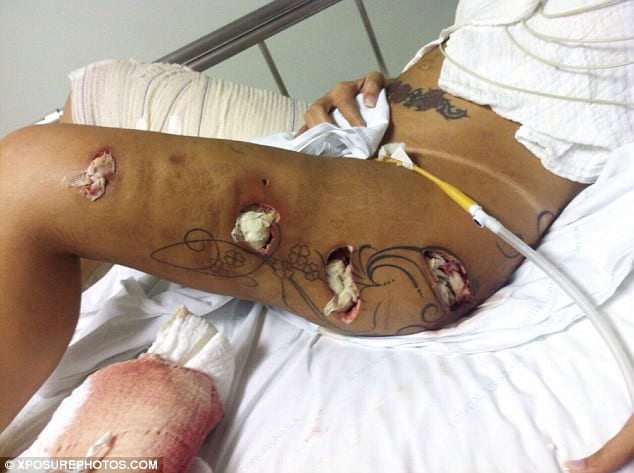 She had sepsis. Let’s talk about that word. What is sepsis, Mayo Clinic?

Sepsis is a potentially life-threatening complication of an infection. Sepsis occurs when chemicals released into the bloodstream to fight the infection trigger inflammatory responses throughout the body. This inflammation can trigger a cascade of changes that can damage multiple organ systems, causing them to fail.

If sepsis progresses to septic shock, blood pressure drops dramatically, which may lead to death.

Anyone can develop sepsis, but it’s most common and most dangerous in older adults or those with weakened immune systems. Early treatment of sepsis, usually with antibiotics and large amounts of intravenous fluids, improves chances for survival.

While any type of infection — bacterial, viral or fungal — can lead to sepsis, the most likely varieties include:

The PMMA was essentially absorbed by her body – it stuck to the muscles and remained in place, likely sucked in tight thanks to the muscles’ natural processes of serving as a conduit for fluids. The hydrogel was not absorbed by the body. It sounds like whether or not the stuff is absorbed isn’t the problem – the problem is having foreign substances injected in you in the first place.

There’s one last little matter that needs to be addressed:

Brazil overtook the U.S. in 2013 to become the most prolific plastic surgery nation in the world.

Almost 1.5million procedures were performed in the South American country – an increase of 600,000 in just two years.

These included 226,000 breast enlargements and 64,000 buttock augmentations, a fifth of all those in the world.

Brazil has more than 5,000 plastic surgeons who also performed 78,000 facelifts, 77,000 nose jobs and 219 penis enlargements, according to the International Society of Aesthetic Plastic Surgeons. [source]

These are JUST the numbers reported by an official society of plastic surgeons that polls its members. That’s nothing to say of the number of legitimately-licensed surgeons who don’t answer to them. That’s also nothing to say of the thriving surgery black market happening in Brazil right now, nor does it speak of the thriving black market surgery system in the United States. This is a large part of why so many people “take a trip” to Brazil – cheap (a US dollar is worth approximately 2.20 or so in Brazilian currency) and [often good] surgery from people who know exactly what kind of figure you’re aiming for. Except….for when you travel and find that you’re meeting with Back Alley Betty who injects something in you that rots you from the inside out, and years later you find yourself losing your limbs… and ultimately, your life.

How long before we accept that there is no safe way to do these injections? What’s it going to take for us to realize this isn’t safe? Is it going to take all of our favorite Instagram-celebrity booties rotting from the inside out publicly before we get it? What do you think?

Scratch Factory: Learn the Art of Hummus Making with My Own Onion and Thyme Blend!

that is so sad that people are willingly sacrificing their lives to be “beautiful”… we ALL grow old.. 2015 is the year to accept yourself as you are, nothing wrong with improving your health but we must learn to accept our self and our beauty!!!

Seeing the pics makes me want to run screaming from the room. For God’s sake people, LEAVE YOUR BODIES ALONE!!

wait… so she had what amounts to plexiglass/lucite injected to hide wrinkles with another substance that never dissipates?