Home From Erika's Kitchen Scratch Factory: Learn the Art of Hummus Making with My Own Onion and Thyme Blend!

Scratch Factory: Learn the Art of Hummus Making with My Own Onion and Thyme Blend!

I find that, the more I explore other cultures’ foods (my own included), the more similarities I manage to find. Every culture has its flat, baked, dough thing, or its round, flat dough thing. Every culture has its stew, its spice blend, its own special way of frying. It’s favorite cut of offal, its favorite kind of bread (which may or may not also double as its flat, baked, dough thing), and its own special way of tending to beans: be they boiled and mixed into soup, combined with rice, or mashed as a spread or dip. 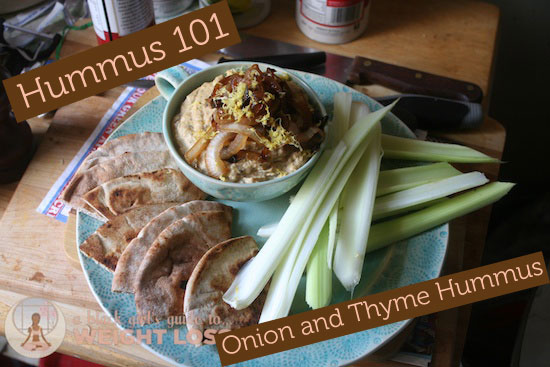 Consider hummus the Middle Eastern/North African (depending on who you’re talking to, I suppose) version of the latter.

Hummus literally means “chickpeas” in Arabic, but that’s not all you’ll find in the dish. Chickpeas that are ground into a thick, gummy paste are then blended with an acidic-tasting element like vinegar or lemon juice; a nut butter like tahini (sesame seed butter) or peanut butter; an oil, often olive oil; and some kind of flavoring element, traditionally garlic. What you wind up with is a delicious dip or spread that tastes like little angels doing the butterfly on your tongue. 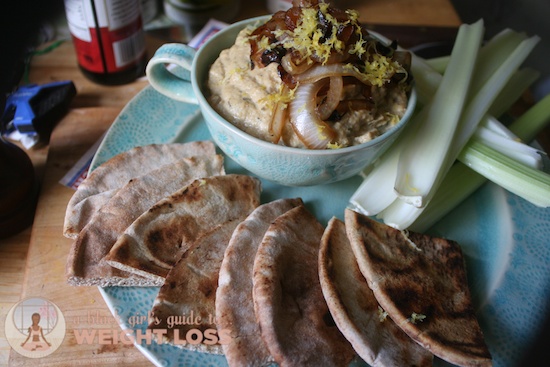 And I, unsurprisingly, happen to make fantastic hummus. And I’m gonna teach you how, by sharing with you my recipe for caramelized onion hummus. 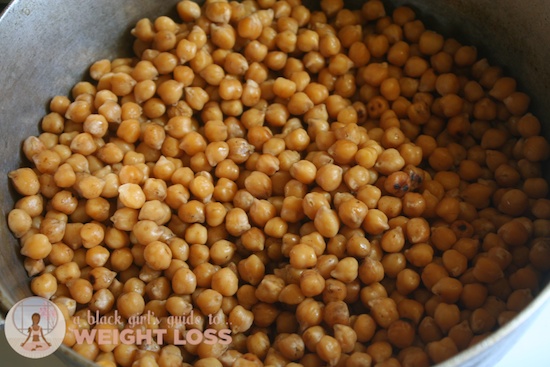 Giant pot. Lots of water. Chickpeas. Hours of cooking. Prepare and cook your chickpeas according to the directions on your package. (I buy my chickpeas in bulk from Whole Foods, so I don’t really have a package, but since most – if not all – bulk bins have directions on the label, just scribble down the directions when you get yours (or snap a photo of the directions with your phone if you can.) All dried chickpeas aren’t created equal, so a quick glance at the instructions can save you a lot of headache. (Then again, so could just buying canned ones… but, as I’ve said plenty of times before, I’m cheap.)

You’ll also need a mashing device. A food processor is your best bet. I’ve tried making hummus with an immersion blender, and I’m sure a determined person could make it happen, but that’s an arm workout that I struggled through. A regular blender could get the job done, depending on whether or not it’s strong enough, but don’t be surprised if your blender putters out. I liked the food processor I used for this – worked hard and was inexpensive – but because it has so many difficult to clean crevices, I couldn’t recommend it and am still looking for a new one.

This recipe is much more about texture and building it to your tastes than anything else, because there are so many variables. You’ll see what I mean. 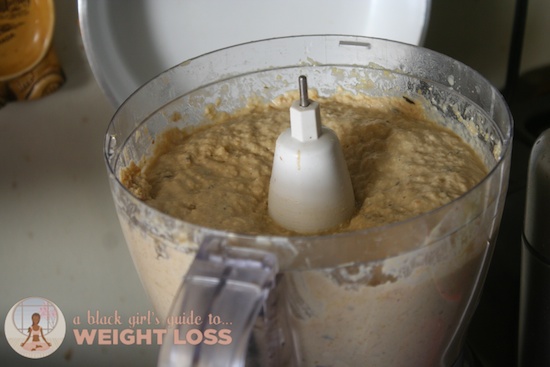 hummus blended with onion and thyme

What you have now is a great paste, but it is super dry. There’s not an ounce of fat in this, which will also make it grainy and particularly unsatisfying. Don’t get it twisted – you need fats. You also need flavor, which is why we’ll be adding a few other ingredients to the blend! 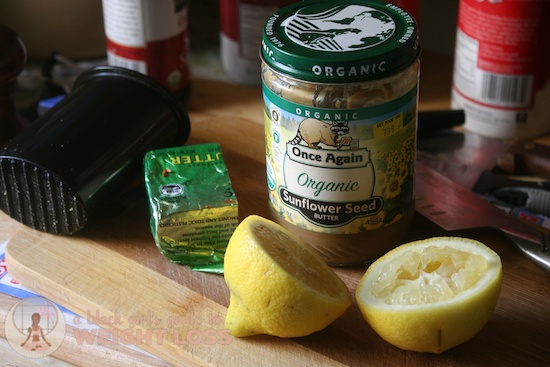 Nut butters have such different flavors – there’s a nice creamy, roasted texture to tahini; a bright, airy taste to sunflower; a rich, dark flavor to almond; cashew, peanut, whatever, you can mix and match flavors at your discretion. For mine, I used sunflower seed butter, for no other reason than the fact that this is what I had on hand at the time (which is often all I have on hand, since the kids aren’t allowed peanut butter in school). For approximately three-and-a-half cups of blended chickpeas, a third of a cup of sunflower butter will do.

Squeeze a fourth of a cup of lemon juice out into your food processor, and three tablespoons of olive oil (or an oil of your choice), as well. 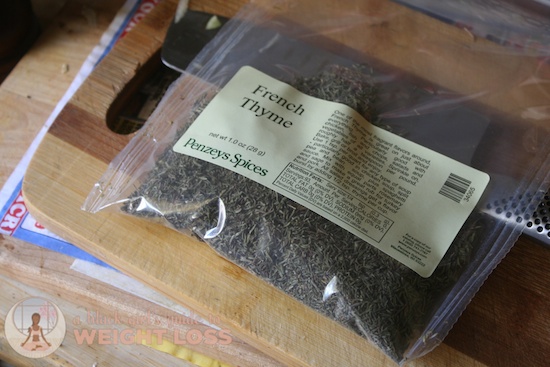 Two tablespoons of thyme, a half-teaspoon of sea salt (not fine, not table salt) and one massive onion sliced into thin strips all go into a big skillet together with two tablespoons of the same oil you used in your chickpea blend, on medium-low heat (maybe 4/10.) 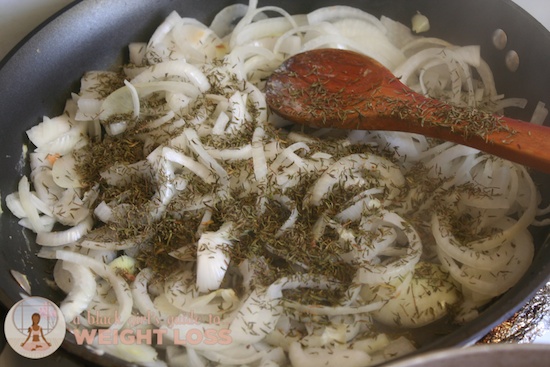 Cook your onions down until you get a nice caramel brown on all of them. You’re looking for them to not be so white and opaque with that rigid texture, but more of a translucent, soft brown color. 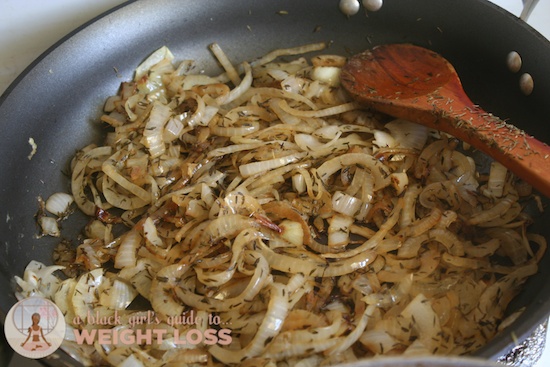 Once you can see through them and they start to smell sweet, not bitter, you’re all set. 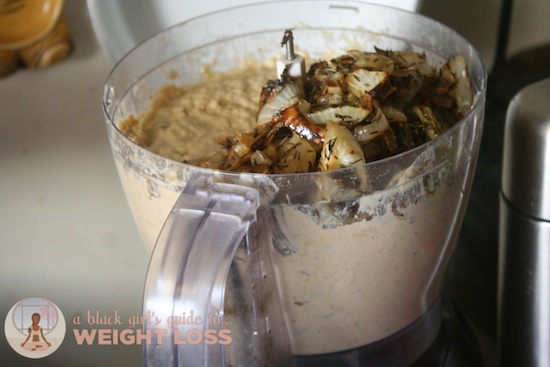 Take a half-cup of your caramelized onions, and set them aside. Place the rest inside of your food processor, and blend everything together. At this point, the mixture is up to you.

Dip your finger in it – does it need salt? More lemon juice? Is it still grainy? Try adding a bit more of the chickpeas’ original cooking water to the mix. Does that help? Could it use a bit more oil, or nut butter? It’s totally your call, but add things a tablespoon – or, in the case of the salt, an 1/8th teaspoon at a time – and then give it a good blend. If you find that things aren’t mixing well, turn off your blender, take your spoon and stir the onions down deeper into the mix. 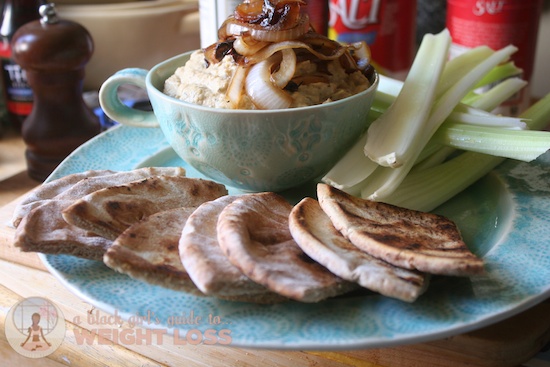 Scoop your newly-made onion and thyme hummus into a bowl, and use the onions you set aside earlier to top it all off. If you have a zester, shave off some of your lemon rind onto the top for flavor. 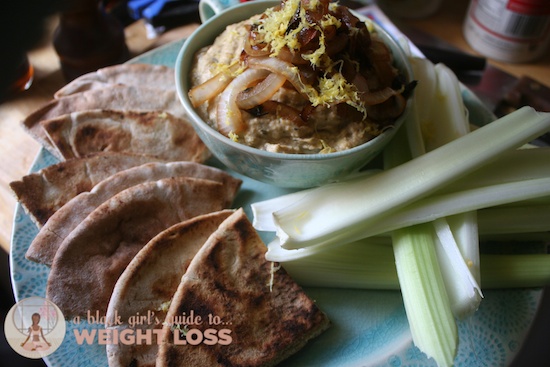 Grab your dippables, and set yourself a lovely plate.

As you can see, you can swap items in and out at your discretion. It’s a super-loose recipe. Sometimes, I’ve skipped the nut butter altogether and used greek yogurt in its place, when I wanted a more protein-filled dip. 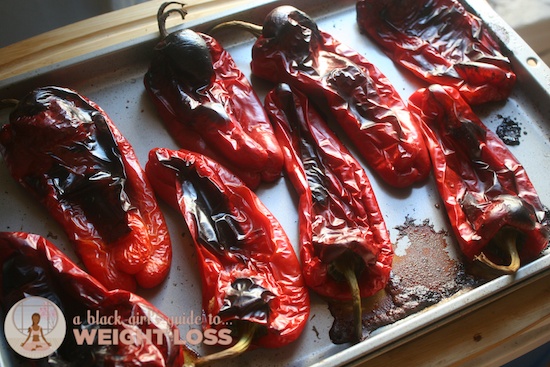 taken from: how to roast red peppers

I’ve used roasted red peppers in place of the onion and thyme blend; 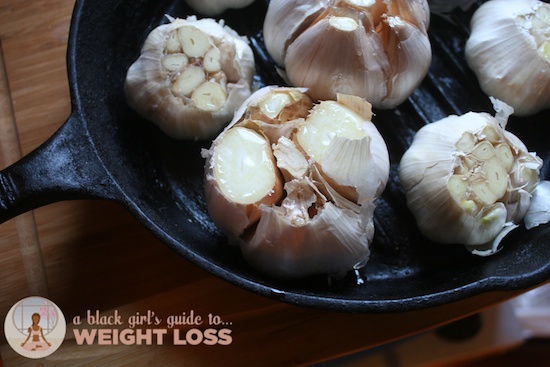 taken from: how to roast garlic 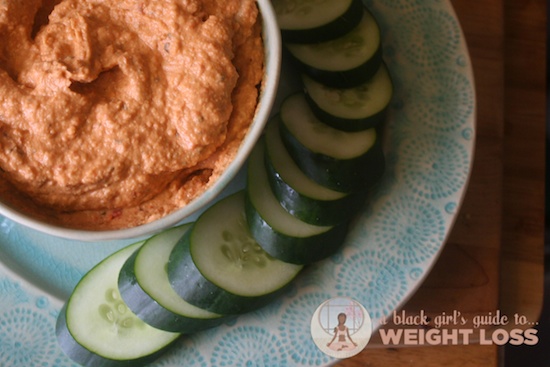 and I’ve even soaked and softened sun-dried tomatoes to make sun dried tomato hummus, as well, and it was everything.

What’s more, I’ve got jalapeno hummus sitting on my desk as I type this… right now, and I’ve got scotch bonnet peppers in the freezer right now for a hummus that I want to make for Eddy…whose index finger always mysteriously smells of jalapeno whenever he slinks out of the kitchen. Maybe if he had his own, he would stay his tail out of mine.

As you can imagine, chickpeas and I have built a long-standing personal relationship with one another. Now you’ve got a reason to build one of your own!

Tell me – what’s your favorite kind of hummus?

I love hummus.. My favorite is cilantro lime hummus.

Yay! I’ve already cut up my veggies but the dip I bought has already gone bad. Setting up my crockpot to cook my beans right now.

Oh my goodness, that looks DELICIOUS!

Great pictures, by the way. =)

I’ve been making my own hummus for years. I use canned chick peas and rinse really well before blending…it cuts the prep time ten fold. Haven’t tried the Carmel onions, looks and sounds great…I must try. Thanks Erika

LOVE hummus. Need to try making my own, stat!
How long would you say your homemade hummus would last in the fridge? 1-2 weeks?
I live by my lonesome, so I always have to consider serving sizes and how long things will keep before I make them from scratch! Waste-not, want-not…

I do a “sick day” hummus that originated as an immune system booster but is now pretty popular as an everyday hummus too! It’s 1 1/2 heads of garlic (raw) and the juice of 1-2 lemons, plus the chickpeas and tahini. It’s really, really intense but I love it!

This sounds like you need to make me some and ship it to me.