Home BGG2WL Sound Off: Share Your Thoughts on the Boston Marathon Tragedy

Sound Off: Share Your Thoughts on the Boston Marathon Tragedy

I spent a good amount of time sitting on my couch, watching the news coverage of what happened near the finish line at the Boston Marathon yesterday… pretty much incredulous. Partly because I’m scheduled to speak in Boston in a few days and was wondering if the perpetual discovering of bombs would risk the safety of the colleges I would be speaking to, but also because… I mean, come on. Bombs.

In case you don’t know… this happened: 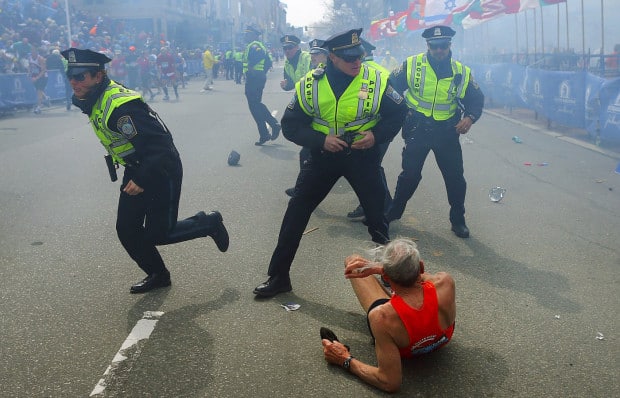 Two powerful bombs exploded near the finish line of the Boston Marathon on Monday afternoon, killing three people, including an 8-year-old child, and injuring more than 100, as one of this city’s most cherished rites of spring was transformed from a scene of cheers and sweaty triumph to one of screams and carnage.

Almost three-quarters of the 23,000 runners who participated in the race had already crossed the finish line when a bomb that had apparently been placed in a garbage can exploded around 2:50 p.m. in a haze of smoke amid a crowd of spectators on Boylston Street, just off Copley Square in the heart of the city. Thirteen seconds later, another bomb exploded several hundred feet away.

Pandemonium erupted as panicked runners and spectators scattered, and rescue workers rushed in to care for the dozens of maimed and injured, some of whom lost legs in the blast, witnesses said. The F.B.I. took the lead role in the investigation on Monday night, and Richard DesLauriers, the special agent in charge of the bureau’s Boston office, described the inquiry at a news conference as “a criminal investigation that is a potential terrorist investigation.”

The reverberations were felt far outside the city, with officials in New York and Washington stepping up security at important locations. Near the White House, the Secret Service cordoned off Pennsylvania Avenue out of what one official described as “an abundance of caution.”

President Obama, speaking at the White House, vowed to bring those responsible for the blasts to justice. “We will get to the bottom of this,” the president said. “We will find who did this, and we will find out why they did this. Any responsible individuals, any responsible groups will feel the full weight of justice.” [source]

This is exceptionally frustrating to me, because the ages of the victims of this bull have started rolling out, with children as young as 4 suffering injuries from this.

It’s really easy to look at situations like this as adults who can say, “You can’t stop doing what you’d normally do any day! That’s how you let ‘the terrorists’ win!” But as parents, we are tasked with making big changes to accommodate our children’s well being and safety. Having our understanding of “safe spaces” and “family spaces” breached is jarring. There’s a combination of anger, sadness, and confusion, here.

My focusing on this from the perspective of “parent” doesn’t imply that this is the most important takeaway, at all. It’s just the only thing that I can actually express… with words. Right now.

I’m sure that we’ve all seen the video of the first explosion, near the finish line, that sent one of the runners to his knees, yes?

You’ll be happy to know that that runner completed his race.

For Bill Iffrig, whether to finish the race was not a question.

The 78-year-old Lake Stevens man got knocked to the ground 15 feet from the finish line by the first explosion in a moment documented by a photograph that quickly went viral.

“The force from it just turned my whole body to jelly, and I went down,” said Iffrig, noting that nothing actually hit him.

But when Iffrig rolled over and realized he had only a scraped knee, he knew he had to finish.

“Somebody came by with a wheelchair, but I said, ‘I’m fine.’ I wanted to finish,” said Iffrig, a retired carpenter and well-known Club Northwest running club member participating in his 45th marathon, including his third in Boston.

The U.S. Track and Field website lists him as one of the nation’s top masters long-distance road runners for his age category. On Monday, he finished fourth among men ages 75-79, according to the Boston Marathon website.

With sirens sounding all around him, Iffrig kept walking to downtown Boston’s Park Plaza hotel to find his wife, Donna. The two met on a blind date and got married 58 years ago, Iffrig said. They’ve been living in the same Lake Stevens house for 50 years, Iffrig said.

“We’re not quitters,” he said.

Iffrig and his wife spoke by phone from their hotel later in the day. Iffrig said his ears were still ringing, but the couple was glad nothing worse happened.

“I was really lucky,” Iffrig said. “If I’d been any closer at all to that thing, I wouldn’t have made it.” [source]

What are you girls thinking and feeling? To those of us who race, will you race again? Why or why not?

Food 101: The Problem With Processed Foods

R.I.P. To The Panty Collection… And The Bras… And The Shoes… And…

What a tragedy and I have no words for this horrible thing that impacted so many lives. I live 3 blocks from where this happened so it hits close to home. I feel terrible for all of the victims and their families, especially the family of Martin Richard, the 8yo boy that died. How awful for his father, a runner. This was supposed to be a joyous race day for him and now one child is dead and his wife and another child are recovering from attack. I will keep praying for all of the victims and for this great country. We have seen adversity before and we always prevail!

As a newish runner – over a year ago I embarked on this journey to lose weight and never thought I’d become a runner…..I made a goal to walk 12 5ks in 2012 and I lost nearly 100 lbs and finished 14 5ks in 9 months. I went from walking them and feeling as though I couldn’t do it to running the whole thing to training for a half marathon.

I was stunned yesterday. I sat on the couch. I cried. I watched. I shook.

And last night at dinner (in a restaurant) I saw an interview with this man, this 78 year old runner who finished his 45th marathon AFTER a bomb knocked him down and I cried again. In the restaurant.

Because I am part of this community. I am a runner. I am resilient. I will run my Nike Women’s Half Marathon in 12 days in DC. We will be scared, but proud to run for those who were not able to finish their 26.2 yesterday. I willl run with my Team in Training teammates – the same teammates who have encouraged me to rest when I needed, run when I didn’t want to and train when I needed to. These teammates, this family, is strong and we will continue to run and continue to improve our health and challenge ourselves.

No words can describe how nervous I am about running three upcoming races in the next few months after yesterday’s Boston Marathon bombing. But, I’m making the choice to stay in the races because I’ve been working hard towards being able to even be a part of them. Is what happened yesterday scary? Yes! Will it turn people away from doing marathons or any outdoor events like this in general? For some, it absolutely will. But for many who love what they do, they will continue to compete in fun runs, half marathons, marathons, Color Runs, Tough Mudders, Ironman, etc. It’s what gives them life, gives their bodies purpose. Running for some is their livelihood, for others it’s sanctuary. No one yesterday could have imagined that their sacred space would be violated by a person or a group with something to prove and no guts to turn themselves in.

I do think even more safety parameters will be put around these events, but we can’t say that will make us, the participants, any more or less safe. It will indeed make us all hyperaware of our surroundings and the people we randomly interact with. Last year, I was a part of the Detroit Free Press International Half Marathon (half in US, other half in Canada) with three of my girlfriends. The security on both sides of the border was very tight. You couldn’t even get on the race route without having the right level of international clearance. And the policemen and policewomen were at just about every checkpoint, watching all of make it through that race with numbers in tact. No number, you’re pulled out of the route. I’m sure the security was as tight as it could be for the Boston Marathon, in light of the bombing that occurred. I’m sure that every community the runners passed through had someone type of security on watch for their safety. But I also consider that there are countries that deal with multiple bombings daily and the inhabitants of those countries still have to manage to live their lives with their loved ones until they can have a safe space again.

As I said earlier in my post, no one could have imagined that their sacred space would be violated by a person or group with something to prove and no guts to turn themselves in. But I can’t allow this and other random acts of violence to humanity to keep me from being a part of these races. I still have a whole life to live and a family to care for. If I did, then I might as well not ever leave my home. So yes, I’m running.

I was shaken deeply by this incident. O First and foremost was the thought was there are truly no “safe” places anymore; nothing is sacred. We can’t go to the movies (Aurora, CO), we can’t go to work (9/11), we can’t send the kids to school (Newtown, CT), and now we can’t run foot races that test the limits of human endurance. Then, I was shaken as a new runner. I mean….I just started. I literally just ran my first race this Saturday along with 38K other people. It could’ve happened here. And I can’t even imagine how the runners felt–you’re in your last mile, body tired but you’re feeling pumped because you’re almost done and then out of the blue–an explosion. I just….I can’t even imagine.