Home What Are You Eating? The GMO-Free Eater 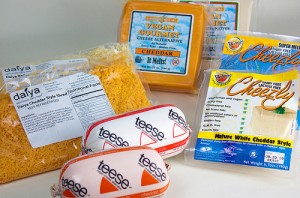 After all that time writing about genetically modified foods, I’m sure everyone was wondering… “Well, how on Earth am I supposed to get by without all this stuff?”

Well, if you were eating clean…. it wouldn’t matter so much to you… but that’s beside the point.

In all honesty, all I could think of was the fact that this issue affects vegetarians and vegans the most.

I mean, let’s be real, here. When I visit the “vegetarian” section of the grocery store, I see… more processed foods. I mean, you’d even expect the vegetarian section of the store to be next to the produce section, but alas… it’s not. It’s “vegan sausage,” “vegan chik’n,” “vegan egg replacements,” “vegan bacon (!?),” “vegan cheese (and it melts!!!!@!!!!!1111),” “vegan burgers” and “vegan boneless (?) wings.” All are variations of soy.

And don’t get me wrong – those of us who don’t care about the whole genetically modified thing, fine. But if it’s an issue for you, or if you’d like to at least be conscious of it? You’ve got some work ahead of you.

Firstly, there are only a handful of vegetables and fruits that are genetically modified, but that handful makes up a ginormous amount of the ingredients in processed foods. Soy, corn, canola oil, cottonseed oil, squash, papaya and now alfalfa pretty much covers the list… but realize the prevalence of those ingredients and their variations: soy flour, soy protein, soy lecithin, textured vegetable protein, hydrolyzed soy protein, maltodextrin, corn meal, corn syrup, high fructose corn syrup, dextrose, soybean oil, corn oil, citric acid, canola oil, vegetable oil, artificial sweeteners. That list goes on forever, but that little list is enough to cover at least 70% of all processed food right now.

Secondly, realize that if your meat isn’t organic, it is likely that the animal has fed on genetically modified feed – corn, specifically – and if you’re eating the flesh of that animal, you’re still ingesting genetically modified food. (Remember – if you’re avoiding GMOs because you don’t want it in your body, then you certainly don’t want it in the body of the animal you’re eating.) Try to invest in organic meats – they taste better and are free of genetically modified foods by definition, since in order for meat to be considered organic, it has to have fed on only organic materials.

You’ll also have to take this into consideration with your milk and cheeses, as well. Because dairy cows are often injected with rbGH, which is a genetically modified hormone that increases milk production in cows. If your dairy products don’t say “rbGH free,” “GMO free,” “hormone-free” or “organic,” then it almost certainly has been affected.

Next, familiarize yourself with the numbers on your fruits and vegetables at the grocery store. Each fruit and vegetable is assigned a PLU code, which stands for “price look-up.” Those of us who have scanned our own groceries at the store (I do this often, so that I can stick my stuff in my grocery bag and save time as well as trash) are familiar with the PLU codes because it tells the scanner what we’ve got. The PLU code tells more than what we’ve got, though, if you pay a little bit of attention! If the number begins with a 4, the food was produced regularly and isn’t genetically modified. If the number is a five-digit number and begins with a 9, that means it was organically produced. If you see a five-digit number that begins with an 8, this means it was genetically modified. Keep in mind, though, that since the only kind of PLU code that has any actual requirement is the one for organics (the 5-digit number beginning with 9), a GMO product might sneak under the radar and fake like it’s conventionally grown. If it’s a must-have ingredient in a big awesome dish, then bite the bullet and go organic.

Lastly, eat as close to the source as you can. It’s that simple. If you’re still buying processed foods, check the labels. If you’re seeing one of those ingredients from above in the list, consider skipping that product altogether. If it’s a must-have, determine whether or not the organic version is worth the investment to you. Sometimes, you’ll often find… it isn’t. At least I know I do, but then again… I’m cheap.

When I originally stated that these things were everywhere, I meant it. It’s tough, but totally worth it. If the goal is to get the most out of every bite, taking these steps to avoid genetically modified foods will absolutely help. As I’ve always said… your body will thank you for it!

Wow so much to think about here, I have been taking steps to become vegetarian maybe vegan but you are so right there seem to be more and more processed foods on the market that ever before for these two lifestyles. But eating organic veggies and whole grains and legumes is simple and clean so that is the way I will be eating.

Once again, Ericka, thanks for having such an awesome site! The PLU code… I hade no idea that those annoying stickers carried so much weight.

‘Eating close to the the earth’…is hard at first and a major hurdle in clean eating, but sites like yours make it goals a reality.

Thanks for the tip on scan numbers. Now that Spring is almost here, it’s time to renew my friendship with my favorite farmers at the Farmer’s Mkt. This may be the year I finally get an animal share…

This is an awesome post! It burns me that manufacturers aren’t required to label their products with this information but that just makes sites like this one even more special 🙂

I know for me, I have no problem with not eating processed foods since it really is just crap like hydrolized soy protein and MSG. I used to love boca burgers a while back until I realized that it was nothing but a tofu burger with the same chemicals I’ve been trying to avoid. My experience with those claiming to be vegan are that they still buy these, but frown on ingredients with artificial flavors, anything animal related,.. oh and that I must hate animals since I still eat them(although little these days). Go figure

I agree that boca burgers seem quite popular, regardless of their chemical content. I am by no means a vegetarian or vegan — I LOVE meat and cheese and eggs, yum! — but I am eating much less of these expensive products because I’m trying to save money where I can. That being said, I like to make my own black bean burgers, and they are awesome!! Don’t even miss the meat at all and as a bonus I get to skirt around the chemical junk! Double awesome!

Did not know about the PLU codes. I try to eat as clean as possible and often make my own veggie burgers, but I will cave and buy Morning star if it’s on sale and the veggies sausage at my favorite vegetarian restaurants taste distinctly like Morningstar patties.

I completely agree that vegan/vegetarian is not always healthy and there are tons of processed and vegan junk foods!!!!! just like anyone trying to live a healthier lifestyle you must read labels and know your ingredients I actually do use the cheese posted in the pic above Teese is organic and non-gmo and is the better choice of the three http://www.chicagoveganfoods.com/teese_vegan_cheese/ingredients_and_nutritional/

I always research products before buying and usually if its thats questionable I dont buy it!!!!! And if we dont buy GMO products companies will stop manufacturing them….. Vote with your dollars

I am glad that you talk about processed vegan foods aka meat and cheese replacements. Often times most of these products are genetically modified. This year I gave up processed vegan foods. Since I am vegetarian I focus on eating whole foods. Sometimes if I go out to eat at a vegan / vegetarian restaurant most item consist of fake meats especially the Asian Chinese/Korean/ Thai places. Now I treat myself to ethnic vegetarian such as Indian, African and different types of Latino dishes because they don’t focus on soy based dishes. I often make sure the product I buy are non gmo. Even though I go to COOP , I am also joining the CSA and shopping at Farmer’s markets since its warmer. I love your blog.

A lot to consider I swear.

Thanks for this informative piece. One of the ways we can all start phasing out GMO foods is by planting out own vegetables. You can do this in large pots placed beside your patio. Things like collard greens, tomatoes and spinach can be grown this way, helping you have a steady supply of fresh vegetables when you need them.

I am a veteran in avoiding GMO, but i just cant find gmo free bacooooon!! and i love bacon 🙁

You may have to visit a farmer’s market for that one, my friend.