Sometimes, I’m just trying to get my meal prep done while I’m in the kitchen doing something else. If I’m already at the stove stirring up a sauce, I’ll go ahead and spice up some sweet potato fries and toss them in the oven. And, while I’ve got the oven on for the sweet potato fries… I’ll prep some oven-fried chicken.

For me, I prefer chicken thighs. I know, I know. They’re so fatty, they’re so greasy. I know. Sometimes, it makes me a little ill, too. I can’t eat too much of it when it’s not cooked like this. The method I use for this recipe actually drains out much of – but not all! – the fat from the inside, leaving you with a moist but not so juicy that it’s practically raw piece of chicken thigh with an amazing crisp on the outside.

There’s also the fact that many people who “oven-fry” their chicken also put some kind of carb-based batter or coating on theirs. I’m skipping that, here. Chicken thighs already come with a skin that’s just fine for crisp and crunch, and most of the fat attached will be melted right off so that there’s nothing to worry about. I mean, we want some fat, here, but not a ton of it. Using the natural parts of the chicken – and draining off some of the unnecessary high-calorie fat – will yield a delicious piece of easily-reheatable chicken every time.

But why not drain out all of the fat, Erika? When it comes to reheating chicken, having a little fat left behind is what helps keep your chicken from turning into cardboard when you reheat it. Coming out of the toaster oven or microwave, your chicken will still be moist , and still have a bit of a crunch to it.

Can you do this with other cuts of chicken? I can’t say for sure. This might work on drumsticks, but it’s a definite “no” on anything skinless, because the skin is a huge part of the success of the recipe. I can’t recommend any cut other than the thigh.

Start with pre-heating your oven to 400 degreez, word to Juvenile.

I guess you don’t like my Juvenile references, ha? Okay, okay, I’ll stop. 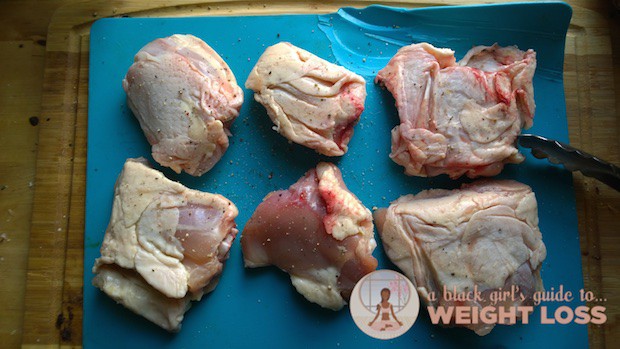 Take your chicken, and lay it out on your cutting board like so, and sprinkle just a pinch of salt, cracked red pepper and black pepper across the top. (And, by a pinch, I mean a pinch and not a pile.) 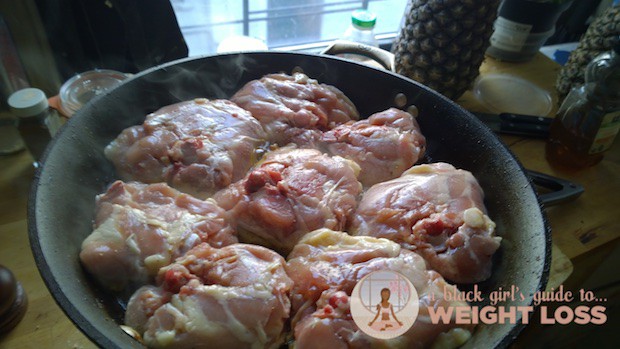 We’ll start by browning the chicken in the skillet, skin-heavy side down. In any other circumstance, you wouldn’t crowd your pan because it impedes your chicken’s ability to heat and cook through thoroughly and properly. Alas, we aren’t cooking our chicken here, merely browning the outsides, so it’s okay to crowd your pan a little bit. Besides, the individual pieces will shrink in the skillet, so while it may be crowded now, it won’t stay that way for long.

You should be using medium-high heat on this, which is something like a 6 on a 10-point scale for your stove. Should you use oil for this? It wholly depends on your skillet. Because I’m using a non-stick skillet, I can skip the oil. If you’re using something more along the lines of stainless steel, you might want a bit of oil. Don’t worry too much about added calories, here – the rest of the cooking process will actually drain quite a bit of any excess oil off.

For the record, to “brown” something essentially means to partially cook – or “par-cook” – something to the point where you give the outsides a separate and unique flavor from the insides. You’re giving the outside a golden “brown” color, but you’re also giving it mucho flavor. And, for the sake of this recipe, you’re cooking the outside to a degree that will result in it crisping in the oven, while the inside remains juicy. Win-win. 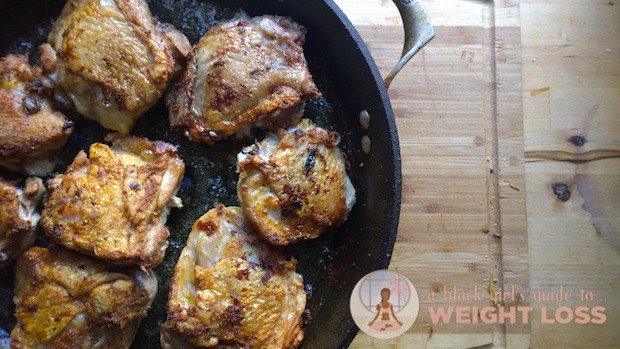 You’ll cook it on this side for about ten minutes, and then – with your tongs – individually flip each piece over one at a time, so that the golden cooked-side is facing you. You’ll cook these for another ten minutes this way. If you’re using a steel skillet, you should have more than enough oil in the pan now for you to flip without needing any more. And no, there’s not really much need to replace the oil with fresh, here. It won’t be cooking for long enough for any of that to matter. 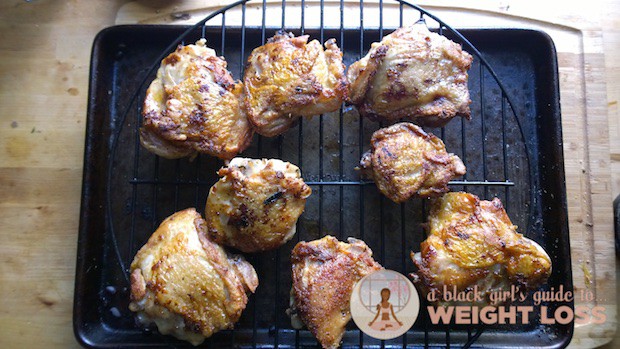 For the next part, you’ll need a baking pan and a baking rack. I literally took one of my round baking racks and laid it flat across the top of one of my baking pans, and that worked just fine. The goal here is to let the fat drip off of the chicken in the heating process. 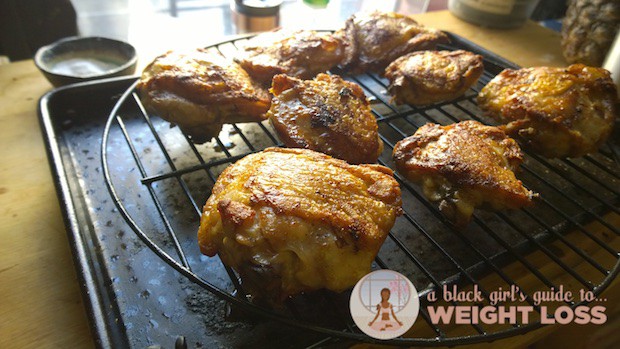 Slide your chicken in the pre-heated oven, and let it cook for about 20 minutes total. Sprinkle a few dried herbs on it while you’re at it! I’m using rosemary, here. 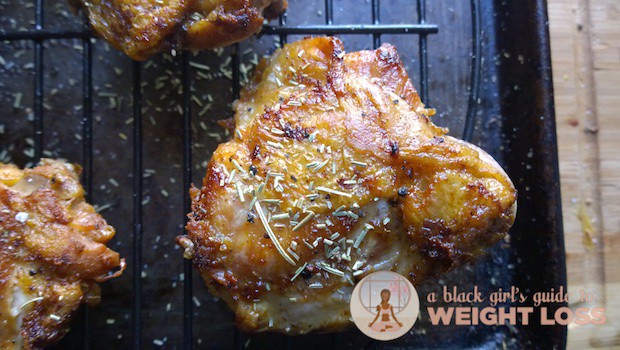 Check on it. You should see more oil dropped down into the pan, and the outside of the chicken is a rich, golden brown. 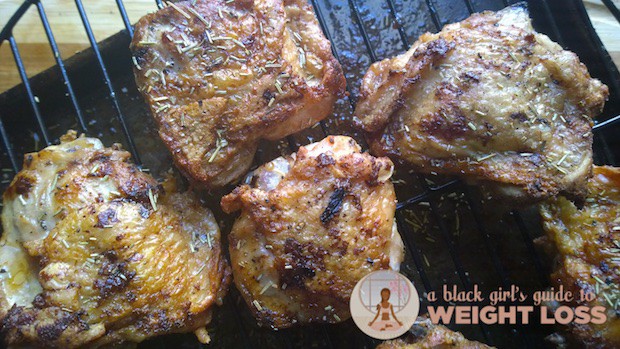 If it’s not crispy enough to your liking, slide it right back into the oven and let it go for 5 minute intervals. Eventually, you’ll get a nice, deep golden brown like I did on my second batch! 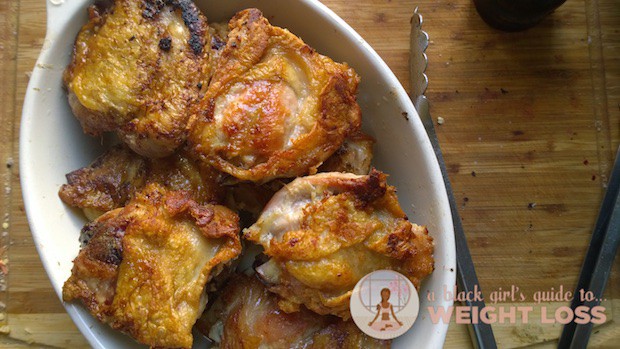 And you didn’t even have to bother with breading or batter to get it done!

Do you oil in the skillet on the first step?

It depends on whether or not you have a non-stick skillet. If you don’t, then a little bit of oil wiped across the pan should do the trick. So much oil will come out of the parts anyway, that adding a bunch to the pan would be a waste of good oil.

I can’t wait to try this recipe. I’m glad I found this website. I’m started my weight loss journey and needed some help. I think this is the right sight for me.

Nice!! I gotta try this!

What temperature do you bake it?

Start by pre-heating your oven to 400 degrees, which is the temp at which you’ll bake. 🙂

What temperature should the oven be?

Start with pre-heating your oven to 400 degrees. 🙂

I am going to try this tonight! Thanks! Congrats on the new baby!

I tried this. IDK, it just tasted like roasted chicken to me. It was good, though. The other oven fried chicken recipe is more like fried chicken IMO.

Unless you used skinless chicken thigh, you should definitely get the same result. Sorry this didn’t turn out for you this time! 🙁

Amazing recipes Erika! Would you know the amount of calories in a serving of this? Thanks 🙂

No, I don’t, but I’d imagine it’s whatever the calorie count is for regular roasted chicken thigh, but with reduced fat quantity.

Trying this tonight. Thanks!

Thanks, I have a pack of chicken thighs defrosting right now. I will surely try this. I’m on my second week of eating clean and it has been a bit tough cooking for just me and the hubby and 3 kids. Now the hubby wants to eat what I’m eating and my 17yo son eats lots of the veggies. Lately I’ve baked everything and soon they won’t even miss me frying foods. My 20yo daughter is another story tho! So this recipe will be pleasing to all.

Tried this tonight! My only regret is that I didn’t make more! Trust me, I am a fried chicken connesuer and this was excellent!

Is the fat melting that you refer to done during the pan searing process or is there something else specific you did that I missed?

The oven-roasting above the pan on the racks is where the fat drips out.

Is the “pinch” sprinkled onto each piece of chicken?

Nah – a generous pinch of kosher salt across the entire flat batch. (By “flat batch,” I mean no pieces of chicken laid on top of any other. All pieces are laid out flat.)

I mean, salting is a personal preference kind of thing, and what people can stand to cut is always relative to where they are today. I won’t tell you how much salt to use, but I will say that you should salt these keeping in mind that you want to begin reducing how much you use, not just keep plugging away with the same amount of salt.

I don’t need a ton of salt unless what I’m cooking has a LOT of spices on it, and even then MY “ton of salt” would seem like nothing to others. But I recognize that not everyone will eat like I do.

I made these for meal prep a couple weeks ago, and seriously they were AMAZING! Looking to make them again, but do you think to change up the meal prep I could put breadcrumbs and parmesan on them this time? Would I need to change anything in the way I cook them? Any tips would be great!