How Food Manufacturers Ensure That You “Can’t Eat Just One”

io9 published this post a few days ago – pardon me, I’m still catching up from the storm and whatnot – but it’s extremely important information:

If you eat processed foods — which most of us do — there’s a good chance you’ve tasted something that was designed by a flavor chemist. But getting pre-packaged foods to taste exactly the way they do is no easy task. It’s a process that requires everything from supertasting chemists to the sourcing of hundreds of complex ingredients. Here’s how these flavor engineers make you keep coming back for more.

Flavor engineering is a surprisingly secretive multi-billion dollar industry, whose in-house chemists work to create both natural and artificial flavorings that consumers find delicious and appealing. These chemists design various taste experiences by blending aromatic chemicals, essential oils, botanical extracts, essences, and whatever else it takes to create a specific kind of taste. 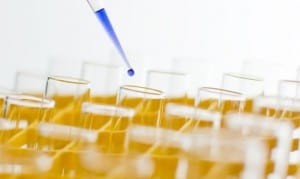 Companies like Givaudan and Cargill create and manufacturer flavors for a wide variety of foods, beverages, confections, pharmaceuticals (including chewable medications and liquid prescriptions), oral care products (like toothpaste and mouthwash), cosmetics (including lip balm), nutrition products (vitamins and sports gels), and even pet food. And in fact, the general principles they follow are very similar to what’s done in the perfume industry.

In addition to creating flavors, they also have to ensure that their products are safe for human consumption (which includes preventing allergic reactions or avoiding toxicity), and that the foods can withstand various compositional changes brought about by cooking, freezing, and other forms of preparation.

Moreover, they have to create flavors that don’t just make the end consumers happy — but their clients as well (they are typically outsourced by food manufacturers). Most of all, they also have to help the food companies make huge profits.

Flavor chemists do more than just mix compounds — they have to be supertasters as well. Many of them attend cooking clinics and follow the work of famous chefs. Moreover, they also have to know the in’s and out’s of taste — and that’s a very complex set of sensory experiences.

Indeed, the sense of taste is a multifaceted physiological process. Working in conjunction with our sense of smell, our 100,000 taste buds elicit sensations of sweet, bitter, sour, salty, and umami (a Japanese word for a pleasant savory taste, but distinct from pure saltiness). The challenge for flavor chemists is to create the perfect mixture of compounds that hit all the right marks.

A company like Givaudan, a Swiss firm that employs nearly 9,000 people in 45 countries, has created thousands of flavors that are used in a variety of products. In order to come up with all these tastes, whether it be the mimicry of an existing flavor or something completely new, flavor chemists often work to modify existing aromas and tastes as opposed to creating abstract smells from scratch; they’re basically trying to ‘improve’ upon the original (what is often a requirement in processed or pre-packaged foods). Interestingly, the two most commonly simulated flavors are chicken and strawberry.

After finding something they like — say a delicious, ripe orange — flavorists extract the fruit’s flavor molecules for further analysis (either by sourcing the vast scientific literature on the subject, or through lab techniques like gas chromatography and and mass spectrometry). They then go about the process of finding a way to simulate or improve upon the original taste.

For example, when designing fruit flavors, they try to create a bursting flavor sensation at the beginning, followed by a finish that doesn’t linger. And fascinatingly, flavorists can create an incredibly diverse array of experiences from a single source; Givaudan has developed 750 flavors of orange, tangerine, and mandarins. Subtle variations include jammy, sweet, floral, seedy, and so on.

And indeed, flavor chemists use a variety of compounds to create their formulas. A typical lab uses of 2,000 chemicals and 500 natural flavors — and it can take anywhere from 70 to 80 tries to get the flavor just right. Some formulas require upwards of hundreds of different notes.

When trying to simulate the taste of chocolate, for example, flavorists will use substances that individually taste and smell like potato chips, cooked meat, peaches, raw beef fat, cooked cabbage, human sweat, dirt and other distinctly un-chocolate-like aromas. And in fact, in some cases it can get quite weird; some strawberry and vanilla flavors are derived from the gland found in a beaver’s backside.

Once the compounds have been selected, the chemists use a “flavor profile” to help them architect the taste they’re trying to simulate. This profile is typically constructed with mathematical assistance, allowing the chemists to make the most minutest of adjustments — what’s typically measured in parts per million (ppm). They also need to be sensitive to how all the various chemicals might react to one another, and whether the mixtures will lend themselves to cooking.

And in terms of the chemicals themselves, it’s a veritable rainbow of possibilities.

The various compounds used include metabolites like acids, aldehydes, ketones, alcohols, esters, sulfur compounds, furans, phenols, terpenes, epoxides, and lactones — many of which are derived from various biosynthetic pathways.

Another common chemical that’s used is ethyl butyrate. It’s one of 30 compounds that are typically found in orange juice. This chemical, along with acetaldehyde, is what gives OJ its succulent quality. Other chemicals include butyric acid artificial and butyric acid natural. Isoamylacetate is typically used to mimic the taste of a banana, while methoxyfuraneol is used to simulate strawberries.

The list of chemicals that are used to flavor a single food can get quite extensive. It can take upwards of 300 individual compounds to endow a food with the flavor associated with a ripe strawberry and 400 volatiles to give a food the aroma of tomatoes. The concentration of these compounds will vary from food to food and can be measured between 10 to 100 ppm — and even as sparse as one part per billion.

First and foremost, as a kid I used to love going to the penny candy store to spend a dollar on everything and walk out of the store feeling like I was ballin’ outta control. I mean, it was bad.

But what I mostly remember, is the flavors of the candy I’d buy – strawberry, grape, cherry – and how they outright ruined fresh fruits for me. How pissed was I, growing up, that “grape” flavor had nothing to do with grapes? And what about “watermelon” and “cherry?” Hell, how many folks are still running around talking about “red” kool-aid, because no parts of that drink taste anything like a cherry? Do the cheapest products simply keep the price down by taking the “flavors” the chemists have failed miserably at creating?

When you talk about how you struggle to put down certain processed foods because the flavor is just “too good” and you “can’t control yourself,” remember that it’s not your fault. If a multinational, multi-million dollar corporation can invest this heavily into creating a product so delicious that you’re compelled to scarf it down, fall in love with it and go out and buy more… then what kind of chance do you truly think you can stand? Your only option, if you struggle with putting it down, is to stop picking it up and putting it in your cart. Your sanity and ability to develop and maintain self-control are far more important than your craving.

Supermarket Swindle: Don’t Get Taken By The Antioxidant Claim

Q&A Wednesday: How Do You Track Your Intervals?

Great post! It’s difficult to get fact-based, scientific-type articles about food/weight/health that’s targeted for black women. I appreciate when you write these type of articles.

Thanks for posting Erika. I view myself as being someone quite knowledgeable on the science behind processed food, but I have to admit this post touched on areas I was unaware of. It’s such a pity that such brilliance is being put towards making food of low nutritional value and possibly harmful to our health. We all have choices and if you feel you can’t control it, best not to eat it in the first place.

Supporting you in getting your fitness and nutrition back on track

I hate that people dont seemed outraged about these things!

Funny…I have always been “crunchy”, even as a kid, and I have never liked watermelon, banana, or green apple flavored stuff, though I love the fruits.