Supermarket Swindle: Don’t Get Taken By The Antioxidant Claim

Y’all should be ashamed of yourselves. How did y’all see this, and let it slip past me?!

So, apparently… this happened:

7Up Antioxidant sodas are under fire from the Center for Science in the Public Interest (CSPI). The consumer advocacy group has sued the drinks’ maker, Dr Pepper Snapple Group, saying its antioxidant claims are not only misleading but illegal. 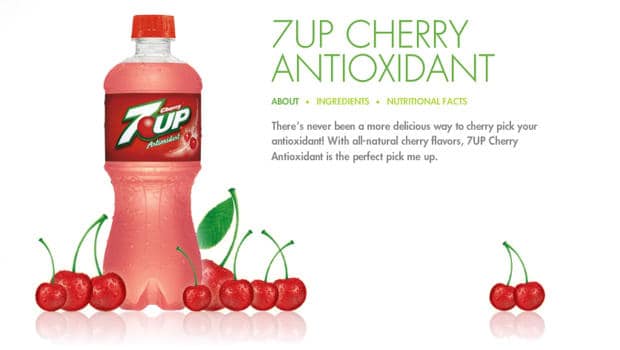 The lawsuit, which was filed Thursday in U.S. District Court in California, calls the claims misleading because they give the impression the antioxidants come from fruits featured on the label rather than added Vitamin E. The group also notes that the Food and Drug Administration prohibits companies form fortifying candies and soft drinks with nutrients.

The suit was filed on behalf of a California man who bought the drinks but says he didn’t know the antioxidants didn’t come from juices.

7Up Cherry Antioxidant, Mixed Berry Antioxidant and Pomegranate Antioxidant were launched in 2009. Despite the pictures of cherries, blackberries, cranberries, raspberries and pomegranates on various 7UP labels, the drinks contain no fruit or juice of any kind.

“Non-diet varieties of 7UP, like other sugary drinks, promote obesity, diabetes, tooth decay, and other serious health problems, and no amount of antioxidants could begin to reduce those risks,” CSPI executive director Michael F. Jacobson said in a written statement. “Adding an antioxidant to a soda is like adding menthol to a cigarette — neither does anything to make an unhealthy product healthy.” [source]

Amid a lawsuit filed by a consumer group arguing the drinks’ antioxidant claims are misleading and illegal, Dr Pepper Snapple Group said Thursday the antioxidant line will be off the market by 2013.

The Plano, Texas company however said the decision has nothing to do with the lawsuit, for consistency across its brands.

Dr Pepper Snapple Group commented about the decision after the Center for Science in the Public Interest on Thursday filed a lawsuit saying the drink’s claims are misleading because they give the impression that the antioxidants come from fruits pictured on the label, when in reality they came from added vitamin E. The CSPI, which advocates for food safety and nutrition, also argued that the Food and Drug Administration prohibits companies from fortifying candies and soft drinks with nutrients.

“Fortifying” an item is an incredibly inexpensive investment for a food manufacturing company… but the payoff is phenomenal. How many times do people pick up two of their favorites, see a “Now fortified with Vitamin D!” on the label, and put the non-fortified item back? How many times do we see a parent, full of guilt about buying a sugary cereal, feel better about it or justify it to themselves by saying “Look! It’s made with whole grains!” or “Well, little Amanda needs her vitamin X, so….” and then all is right with the world?

What is fortification? Why is it such a big deal?

Fortification is, in extremely simple terms, what has happened to your favorite foods when they pop up with fancy new labels that shout out, “Now with whole grains!” Because vitamins are so easy to create in labs – there’s nothing that requires vitamins to be extracted from some legitimate source, somewhere – and because we are, so often, looking for any way [other than actually eating our vegetables] to get in a little extra boost of “the good stuff” to feel better about our food choices, food manufacturing companies are often all too eager to crunch up some supplements in your favorite foods. It’s just good marketing… and good business:

2) Bump the price up a dollar.

3) Add fancy marketing on the label to announce the addition

More interestingly, though, is the fact that while the benefits of fortification are few, the problems with fortification, however, are many. From the Wall Street Journal:

But enhanced foods aren’t always as impressive as the label may suggest –especially when compared to whole foods. “Processing destroys nutrients, and the more processing there is, the more destruction you get,” says Marion Nestle, author and professor of nutrition, food studies and public health at New York University. “Fortification adds back some nutrients, so overall you’re better off with a processed fortified food than a processed unfortified one. But a whole food is always going to be superior.”

For instance, while numerous brands of protein-fortified pastas can contain nearly as much protein as a serving of meat, the meat is usually the healthier choice because the pastas are made from processed grains and are thus high in simple carbohydrates. Another example: Since probiotics occur naturally in yogurts, consumers might be tempted to think that yogurts touting extra probiotics may escalate health benefits. But processing actually breaks down existing probiotic strains, and many of the lab-developed variants have little research to support their health claims.

Then one has to be mindful of serving size and strength. Hearts and Minds Peanut Butter with Omega-3 and Olive Oil has 100 mg of the fatty acid per two-tablespoon serving, but a 3.5 oz. portion of salmon, tuna or sardines has 1,500 mg of omega-3. One would have to eat 30 tablespoons of the peanut butter — and 180 grams of fat — to get the same amount of omega-3 present in a single serving of fish. Wonder Classic Calcium Fortified Enriched Bread may sound impressive, but one slice contains only 10% of the daily recommended value of the mineral — a third of what’s in a cup of low-fat milk. [source]

There’s another frustrating reality of supplementation and fortification that needs to be acknowledged, and that’s the fact that science isn’t fully aware of what makes what vitamins tick. Is it just “the presence of Vitamin E” that makes hair grow? Or is it “the presence of Vitamin E, in conjunction with fat and some weird beta carotene compound” (I totally made that up.) that makes hair grow? Is it simply the vitamin, or is it just the vitamin combined with the presence of other items that results in the benefits being released? And, do we trust food manufacturers to be so abreast of that research, that they’ll make sure that they also add those combined parts?

And, what’s more, do we trust science to know that now? Science can do a lot of amazing things, but there’s not enough definitive research to signal to me that fortification is trustworthy. I’ll never let this be lived down, but considering the way the government and its “science” rode so hard for margarine and trans fats, only for countless lives to be lost because we enabled the idea that we should be eating everything except what’s naturally made? It’s just not worth it.

In the end, I know there’s tons of snark out there about “who is looking for antioxidants in a soft drink, anyway?” but I actually get it. People are simply out there trying to get as much good stuff into their bodies as possible, and antioxidants are important. (They can aid in neutralizing, for lack of time and a better phrase, the free radicals that can cause cancer.) The harsh reality of that, however, is that there’s little to suggest that any of this is better for you than the original sources of these vitamins and minerals, fruits and vegetables and lean sources of protein. You’d be better off swallowing a cup of kale (or even collard greens!) than you would be ever drinking an “antioxidant pop” (I’m from the midwest. It’s pop.) and the sooner we accept that, the better off we’ll be.

How Food Manufacturers Ensure That You “Can’t Eat Just One”

The snarky example you gave about the Vitamin E isn’t all that far off. It’s fat-soluble, so arbitrarily adding it to a drink that doesn’t HAVE it just feels a little silly.

I liked this line. I liked it because it was a cherry flavored drink that wasn’t overly syrupy–I switched to lower-calorie sodas when, after having spent weeks drinking stuff I made from scratch, regular soda just felt…too…something. Vitamins A, C, and E–the most commonly declared “ANTIOXIDANTS!” on the label–were just nice to have. But I saw the asterisk on the label that denoted that there was zero juice in the soda.

Frankly, if one wants a great antioxidant soda, a shot each of tart cherry and wild blueberry juices in a tall glass topped with seltzer is way better. For one thing, you don’t get all that sugar.