The day that Eddy proposed to me, I felt like I glowed from the inside, out. I felt the Earth rotate in the opposite direction. I felt the ground shake under my feet. I felt renewed, energetic, excited. Overjoyed. I found the ever-elusive love from someone who loved me and my daughter and was willing to care for us like we were his own flesh and blood. Really, he was asking us to be his flesh and blood: his family. And I gleefully accepted. 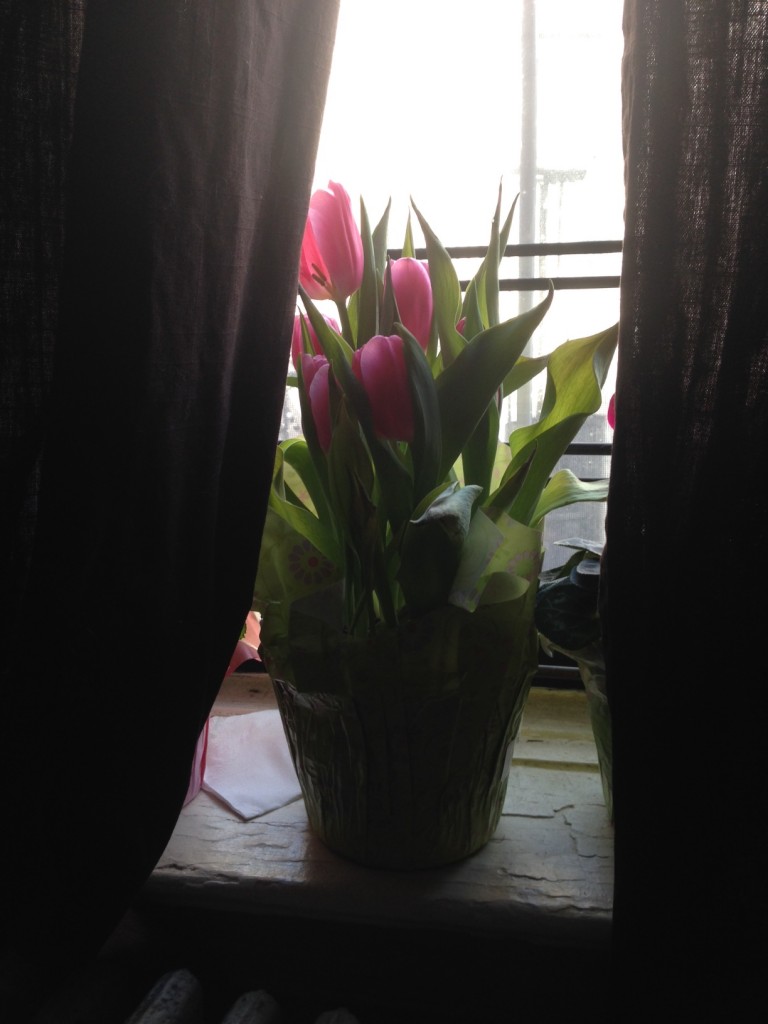 Life was such a whirlwind for us after that. Not even a week after I said yes, we had hard decisions to make. The economy was in the toilet in Miami and, although we could’ve lived on my income alone – seriously, that’s how unwilling I was to give up my cozy little crib in the sun – he wasn’t happy with that. He needed to work, and he needed to keep busy. And, really, he needed to live in New York.

I sat and stared at the wall for hours, frantic. I don’t do big cities, son. I’m not here for bright lights in the big city. I’ve never been further east of Cleveland, man – what kind of life do you expect me to have out there? I never said a word. I just sat, and stared at the wall. Frantic. Fearful.

I told him everything. Everything that I thought made me feel unworthy, unlovable, undesirable, unacceptable. I hoped to the heavens that it’d all make him decide he might’ve made a bad choice in choosing me as his partner, and maybe we shouldn’t move together after all. And, before I knew it, he stood up, came over to me, and squeeze-hugged me with those giant arms of his. “If I thought I couldn’t keep you safe and happy there, I wouldn’t have suggested it.”

After weeks of wall-staring, I – in a daze of madness – nodded profusely and told him, “Okay…. okay,” and, with a deep breath, followed with “I guess we’re moving to New York.”

Immediately after arriving, we started with the planning of our wedding. We settled on a beautiful place out in the Bronx, signed the paperwork, chose our date – October 5th, 2012 – and started making payments right away. We searched far and wide for our Harlem Renaissance-themed wedding – a three piece suit for him, an ice-white halter neck gown with a jeweled collar, for myself. The facility had floor to ceiling art work, modeled after old jazz clubs back in the day, and it was unlike anything else I’d ever seen in my life. I immediately felt fancier, and he could tell. He was bending over backwards to make sure I was happy in my new home town.

Soon, 2012 rolled around, and I was getting tired of making all these damn payments for one damn day. Looking at the cost of everything that I wanted for my life – real estate, vacations, a debt-free education for Mini-me – and spending all this money on my wedding day…it felt selfish. I wanted so much, so much beyond the wedding, that I eventually got fed up.

One night, after work, we sat across from one another…and I just tossed the idea out there.

“We should just get married. Jay-Oh-Pee it.”

My suggestion was met with laughter. Like, lots of it. “Yeah? Okay. I’m with it. I’m tired of this wedding bill, anyway.”

Not another word of it was mentioned… that is, not until Leap Year Day’s Eve actually rolled around… and I received a phone call on my cell.

“Aren’t we getting married tomorrow?”

Apparently, he took my lack of mentioning it again as it being a done deal, no additional discussion necessary. I, on the contrary, took it as “Yeah, you’re full of it,” and him brushing me off. I mean…he seemed really excited at the premise of being fitted for a custom charcoal grey three-piece suit.

I darted off to meet him at City Hall, and we filled out the requisite paperwork…but I still had my reservations.

“Listen – we can wait as long as you like. If you don’t want to do this tomorrow, we don’t have to.”

I shook my head. “I just need time to think.” And, that was the last of it… until 11:am the next morning.

“Listen, I’m at work now and I’ve got some down time…so if you want to do this now, you can meet me at City Hall.”

I took a deep breath, looked at myself in the mirror of the PTA room at Mini-me’s school – in full gym gear with a bandana tied around my hairline – and said, “Alright… I’ll be there.” I snatched off the bandana and put on a headband. I figured that might be classier. Maybe.

I ran to Mini-me’s classroom, and snatched her up early, dashing off to the train. We met him there along with Peter, one of his co-workers and an all-around dope guy, both in their work gear. Mini-me, in her little red bowtie and uniform. Me… faded mickey mouse t-shirt, Eddy’s sweatpants, and some Pumas. And, when it was our turn to enter the little room, we were all grinning.

Maybe that was for the better. I didn’t have the “grand welcoming” into wedded bliss – in fact, it felt an awful lot like the ‘engaged bliss’ we’d shared the days prior. Our “married fights,” however, felt even more emotionally charged than our “engaged ones” – we weren’t just fighting to be proven right, we were fighting for our relationship. We were fighting, thought not often, for the opportunity to live up to our vows. And, luckily, perseverance had always won out. (In other words, that first year is so, so rough.)

The challenges of life ebb and flow, but I have never felt like I didn’t have a strong, supportive, loving, encouraging, caring, and all-around amazing husband by my side. He has been so committed to helping me be my best self, to helping me achieve my goals, and to helping me grow in places I’ve been otherwise stubborn. He is a patient soul who listens – that is, after I worked on that whole “cutting me off” thing – to me when I’m sad, hurt, confused, and he always does his best to help me through it.

Should the day come that he and I are no more, I’d be hurt, but I’d know that my life was made infinitely better by having him committed to me. The love he has shown Mini-me and I is the kind of love magic is made of. It’s that thing people tell you isn’t real. It’s real, and it’s out there for us all – when we open our hearts and trust our partners with our most vulnerable selves, and they respond with vulnerability in return, you find strength together. And you win, together.

Thank you, so, so much, Eddy, for loving me. Happy anniversary, baby.

Happy Anniversary to you both, and may you live to celebrate many, many more. 🙂

I’m so happy that you found your happy place there in Miami and were able to move it to the Bronx. Here’s to your future and that of all of your followers.

Awesome very sweet. Ours is Dec. 31 and Jan 1st. Our wedding started at 1130 pm and ending 1 minute before midnight. We kissed in the New Year as a married couple outside with snow falling. It was very cool.

Happy Anniversary to you both!!

That was so beautiful. Happy Anniversary to the both of you. Relationships are about growth, I hope you both can continue to grow together.

Happy Anniversary and with so many more to follow. :O)

Happy Anniversary. That is Beautiful 🙂

Happy Anniversary. Love it so happy that you are happy.

Lady, you are bad as hell on the writing tip! I love your blog and your writing style is so engaging and real. Now if I could just figure out how to bookmark it on my phone so that I don’t have to go through my internet browser. Congrats on your marriage!

i love the story. my birthday is on leap year and i finally found someone who celebrates their birthday or anniversary 2 days.

Maaaaaannnnnnnnnn I’ve been gone a LOOONNNGGGGGG time. I TOTALLY missed when you got married. But, that is SOOO cool! The more I’m in/go to people’s weddings, and hear about all the crap they do, the more I want to “Jay-Oh-Pee it” too! But, I was also hurt (though I shouldn’t have been) by my best friend secretly getting married a year before the wedding that I took time off, bought a $140+ dress, lost sleep for, that really was pointless. So, because of that, I really want to do it one time, and have my friends and family there.

See, I’d never tell anyone to do anything other than what makes them happy, but I’d also have to say that all of the people who love us were disappointed – visibly so – by our choice, but when we told them we wanted to save for our brownstone, where we could have a home so grand, that we could host our OWN wedding? They understood. And they look forward to – and support us towards – that day.

Wow what an amazing story Erika! Thanks for sharing. I got a little
emotional reading your story. Congrats to you and your husband
and your mini-me. You are an inspiration;-)