…let’s take a look at that.

Still chugging almond milk, despite everything we’ve told you this past year? There’s some good news: you may not be destroying the environment as much as you’ve continued to not care about. Why? Because of the bad news: you are likely getting duped.

According to a new lawsuit, Almond Breeze products only contain 2 percent of almonds and mostly consist of water, sugar, sunflower lecithin, and carrageenan, the blog Food Navigator reports. Almond Breeze is among the top five milk substitute brands in the country.

The class action lawsuit, filed by two unhappy almond milk drinkers in the US District Court in New York earlier this month, seeks $5 million in damages from the products’ distributor, Blue Diamond Growers.

While Blue Diamond Growers doesn’t label how much of a percentage of its milk is made from almonds, plaintiffs Tracy Albert and Dimitrios Malaxianis say the company is misleading consumers by its claim on the front of the package that it is “made from real almonds.” [source]

I want to talk to you a little bit about almond milk, as someone who has made her own and was extremely surprised by the process involved with getting even a quart of it: 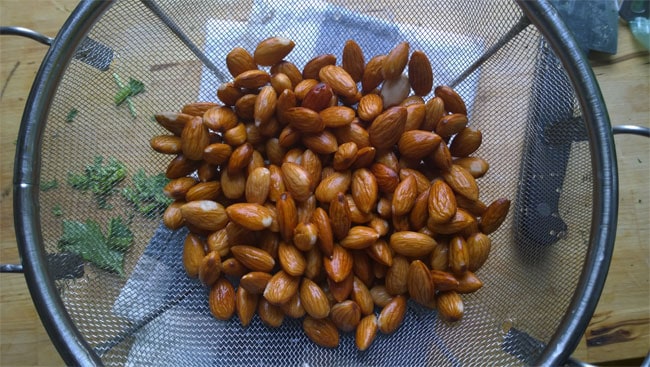 In fact, one of the very few brands to actually offer additive-free almond milk, Califia Farms, was selling it for more like $8 – which, to me, made sense – until they, too, ultimately gave up and started using additives, as well.

But what additives? And how much? 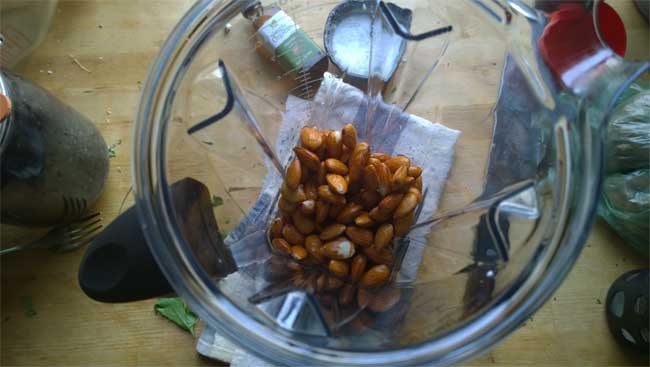 Here’s a look at the ingredients list for the refrigerated form of Blue Diamond Almond Milk:

Let’s break this down:

Carrageenan: Irish moss, akin to seaweed. When used in food, it’s often an emulsifier – something used to bind together things that otherwise might not bind on their own.

Evaporated cane juice: the juice extracted from sugar cane in the process of making granulated sugar.

Potassium citrate: translucent powder used to neutralize acidic foods. So, if you were adding additives to a food and found that it was a tad bit too acidic and was wrecking havoc on your customer’s insides, you’d add this stuff to it.

Sunflower lecithin: all lecithins – sunflower, soy, corn, etc – work the same. The point is to soften and thicken, sort of like taking a water and turning into something creamier than you thought you were getting.

Vitamin D2: an oily liquid – now you see why the potassium citrate was necessary – intended to increase the nutritional value of an item that has had its nutritional value diluted. Breakfast cereals, vitamin D milks, margarine, and skim milks are notorious for having this stuff.

D-alpha tocopherol: a form of Vitamin E, adistilled vegetable oil, usually from corn, soybean and canola oils due to their inexpensiveness and availability.

If I recall correctly, the labeling on the packages might actually say “less than 2% of the following,” but anyone who has ever made homemade jam can tell you – a tablespoon of liquid turns several pounds of fruit into jam… and that’s the “more natural” stuff. The hyper-concentrated powders and juices? I can only imagine it takes even less than that when you use those instead.

So, if the percentage of almonds in your almond milk is somewhere around 2% as the lawsuit alleges… we’re paying upwards of $3 for a quart of water with a small amount of almonds and a large amount of filler and fake nutrients.

What does this mean for lovers of almond milk?

For one, decide if it’s worth it to you to pay $3 for filler and two almonds. If it is, then at least you have a better idea of what you’re paying for. If not, consider making your own almond milk. 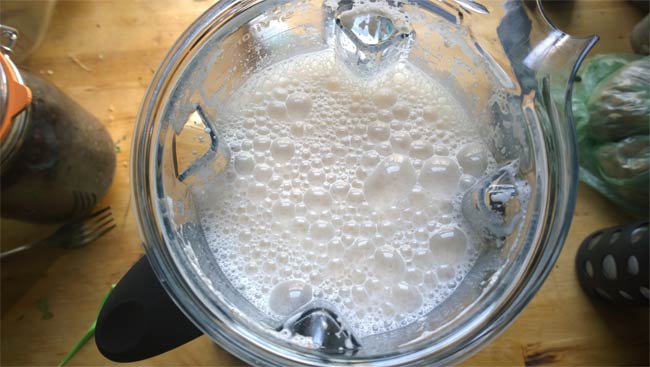 As more brands of almond milk become more readily available to the public, they are often forced (usually by investors) to cut production costs, and this largely includes the cost of almonds. When the price of my once-favorite almond milk dropped by almost $3, I knew something was wrong. I turned it over and looked at the ingredients list, and immediately understood why. It was full of filler. The likelihood that a filler-free almond milk would be readily available and able to be recommended across the country is low. The likelihood that it’d be comparable in price to Blue Diamond brand is, also, low.

Consider making your own. I photographed my own recipe for making your own, but then my boo Hey Fran Hey did a video explaining how to make it, and since I like Fran, I’m gonna say you should check out her video.

For two, consider shifting towards recipes that don’t require almond milk. If you’re attached to a morning cereal with almond milk, consider ditching the cereal in favor of oatmeal or crunchy granola on top of greek yogurt.

What do you think? What other ways could you – or have you – swapped out the need for almond milk? Need help with suggestions? Share!

Brazil: Man Sues McDonalds For Making Him Fat… And WINS!

Adventures In Advertising: Using And Abusing The Farm...

Goodness! I started drinking almond milk because turning 40 meant becoming severely lactose intolerant. Apparently, cheese and greek yogurt are going to be my only dairy friends.

Any other milks (soy, rice, etc.) you would recommend instead? Or do they all have similar drawbacks? I’ve occasionally eaten my cereal with Greek yogurt instead of milk, but I really do prefer the milk.

It’s hard to say – some smaller businesses make nut milks/mylks that aren’t containing the filler, but I wouldn’t know of all of those. I’d say check the label – newer brands are hitting the market every day.

There’s also making your own, and I find that cashew milk is among the easiest to handle in this regard. Posting a recipe soon – hopefully later this week – to help demystify that.

Thank you for this article. I swear by Blue Diamond. Are there any brands that you would recommend? Even a few organic ones from whole foods?

I have yet to see a brand of almond milk that is manufactured and sold in a grocery store that does NOT contain some form of filler and faux nutrition. You’d have to look at either making your own, or finding some kind of small business in your area that makes it.

You know Almond Breeze is made by Blue Diamond, right?

I was a big milk drinker. It used to be my go to breakfast beverage. I cut it out (and eggs) about two months ago, and my skin does look much better. I do miss it though! When I first started looking for alternatives a year ago, I tried almond milk for a month and went back to regular milk. I could not get past all of those ingredients being necessary to make it. Plus it didn’t even taste that good.

Right now I’m using coconut milk (Silk or SoDelicious), and it tastes better. But I constantly feel guilty….I know how much fruit it takes to make a jar of jam or a pie or whatever. The thought of how many coconuts or almonds or cashews or whatever it takes to make “artificial” milks makes me cringe. This, and other points, have led me to understand that milk is something to be used sparingly.

Still use real milk for baking.

Wow! This really sucks! I thought I was making a healthier choice by choosing Almond milk instead of regular milk. 🙁

I am ticked! I have been giving my daughter this and chastising everyone (including her school) who tried to give her cows milk! Thanks for the info

I must have missed your earlier warnings about Almond milk.
Just replenished my stock as my daughter and I have grown attached to green smoothies for breakfast.
I’m going to give making my own a try.
Can’t trust any food companies. Doing right for our bodies keeps getting more and more challenging.

Awww dang!!! I have grown attached to this almond milk. I guess that is no more!! Thank you for the info.

What do u suggest as an alternative besides making your own? I recently switched from 2% to almond milk. But cows milk has sugar. Or should milk just not be in the diet at all?

Honestly, I don’t know. From what I’ve seen, ALL of the major store brands have some form of unnecessary filler in them.

Cows milk doesn’t have sugar in the “table sugar” sense – cow’s milk has lactose, which is an organically occurring form of sugar that exists in cow’s milk. Doesn’t function or react the same in the body as a table sugar of sorts.

I don’t have a problem with cow’s milk, when it’s actually done properly and without hormones, except the fact that it’s MAD expensive.