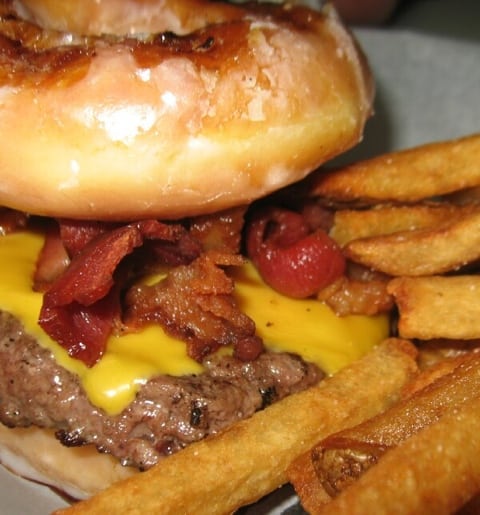 A: If you don’t know what “the ‘itis” refers to… I’ll put it this way. It’s the down time that comes after a meal, usually a massive one. Like, strong enough to knock you out for a good hour or so.

The Boondocks also has a great episode (see part 1 above), where “The ‘Itis” is the name of a restaurant that serves a giant burger consisting of an entire pound of beef patty, grilled onions, and five strips of bacon stuck between two donuts. Instead of tables, the meals were actually served on beds that patrons rented out, so that they could nap easily after finishing the giant burger. To make a long story short, all of the inhabitants of the neighborhood near the restaurant gain weight, with one patron actually suffering a heart attack in the restaurant. Sounds familiar.

The official name for the ‘itis, though lovingly named “ethnic fatigue,” is post-prandial somnolence. It’s the general term for the drowsiness that occurs after eating a meal comprised of a mass of simple carbohydrates (which can, in a nutshell, be boiled down to carbohydrates without fiber) and certain kinds of fats.

It’s like this: eating triggers a reaction from something called the “parasympathetic nervous system,” which tells your body to slow down and focus as much energy as possible toward digesting. The more you eat, the more your body has to slow down.

But the “sleepy” part, that’s different. As your body ingests carbs that result in a large amount of glucose in the system without an adequate amount of fiber to stave off the increase in blood sugars, the body has to release insulin into the blood stream to “mop up” all that glucose. When the body releases insulin, two neurochemicals responsible for lethargy and drowsiness – serotonin and melatonin – are triggered, thereby making the food coma inevitable.

Ethnic fatigue was named as such because it is notorious for coming after a “soul food” meal. Y’all already know how I feel about that – corn bread that doesn’t use legit corn meal; pound cakes with inordinate amounts of sugar (or ANY sugar – the original pound cakes were sweetened with molasses, a sweetener that is far less harmful than any sugar); macaroni and cheese made with cheap, hyper processed pasta and “pasteurized processed cheese product (which basically means more carbs, less protein)”; people bringing pre-made cakes and cobblers from the grocery store (and yes, those grocery store bakeries use high fructose corn syrup, too)? The soul food we “know” today is nothing like what it used to be. It’s not vegetables, meats and creative uses of grain anymore. It’s all hyper-processed garbage because nobody knows how to truly cook it anymore, and everybody’s cheating and buying shortcut ingredients. Meals that have carbs implanted where they were not before? You’re darn right the ‘itis will be present. What we’re also not noticing, however, is that we’re experiencing the ‘itis after every large, carb-heavy meal. Some may even be experiencing it after a large intake of pop. I’ll bet the clean eaters in the crowd, however, aren’t experiencing it much, if at all, nowadays, though.

Food comas don’t last long, but if you’re overworking your pancreas (responsible for insulin in the body) to that extent on a regular basis, the resulting effect of the food that got you into that coma can be a nasty one. Be careful.

From Bypass To Bulimia?

I was just sitting here wondering what I ate that brought about this drowsiness. I figured I just needed to lay off the refined “bad” carbs like pasta and sugar. Now I realize that this feeling is far too common and could easily lead to more than just tiredness. Thanks for this post.

I have to say, although my meals are made from scratch and usually not loaded with carbs, I do know the so-called “soup coma” – but only after lunch. Had it even during my low-carbing attempts (which did not do anything for me, just saying). My doctor explained, when I asked, that it might be caused by the body supplying blood to the gastrointestinal tract for digestion instead of to the brain for working. I am not sure if he is right, but I do think it would be worse after a white pasta dish. (In fact, some scientists suggest carb drinks at night for people with insomnia.)

Honestly, it sounds like something else entirely, to me, but I understand what both you and he are saying.

I only experience this after I go to the Indian buffet. I’m not sure if it’s due to the saag and pakoras, or the amount I eat while there. 😀 Maybe a combination.

However, many cultures take a “siesta” after lunch, so I don’t think it is only due to soul food/slave food. Although today’s version of soul food/slave food is pretty bad, it doesn’t have to be. If the focus was the great variety of veggie dishes and not the pork and grease, it could be rather healthy.

I’m not sure that having a siesta is primarily because of needing a food-coma-snooze after lunch – those who have siestas tend to live in hot countries where it is just too hot to work during the middle part of the day. So, it makes sense for them to have a nap. Usually, they continue working into the evening to make up the lost hours.

Some people bring this habit with them when they move. My Dad (born and raised in East Africa) still loves an afternoon nap despite now living in a country where there is no tradition of siestas – mainly because there is also hardly any heat.. even in summer!

I mean, it’s most certainly not only a “soul food” reaction, but people really need to stop treating it as such.

ALL cultures have some “round, doughy thing” that is high in carbs – tortillas, pitas, biscuits, hoecakes – and, if not kept in check, can overload someone’s system. I don’t see a reason to lay that blame solely at the feet of my culture’s food, which is what is unfortunately done far too often.

Well the way that soul food/slave food is currently made is pretty horrible. I think it deserves it’s reputation. However, those of us who know better, can make it better. There are so many wonderful veggie dishes that fall under the soul food category, yet the only veggie many people eat are potatoes and tomatoes with a side of HFCS (french fries and ketchup). Just think if it was okra, corn, yams, greens, etc. etc. at every meal…. with no hamhocks or pig juice. lol

This coma has been used as my comfort for many years. I eat sugary foods at night when I stop driving to make me sleep only to.awaken with a major headache, dry mouth, and high blood sugar. I am medically trained and from a long line of diabetics so you know I know better. I do okay for a few days but then the detox gets too much and I go back. the sugar, this coma is truly my addiction, one that I so have to overcome.

I often get the itis. I have been trying to aviod the fast carbs and that has helped. I never thought about how my pancrease is being overworked.

Oh and PS. My hispanic friends call “the itis” “Mamona”

Umm, what is a hoecake?

A flat pancake-like bread baked over the top of a hoe. Hence, hoecake.

I think the itis is something I get when I overeat. I have stopped doing that. I often eat slower now.

I just found out on line that the itis has plagued me for quiet some time now. I fall asleep every night after dinner. I awake sometimes with my face in my plate. Every Sunday, I fight very, very hard to stay awake in church. I’m not good for much of anything after eating. At least I found out that there’s a name for this problem. Thank You