Q&A Wednesday: Is Calorie Counting The Only Way To Lose Weight? 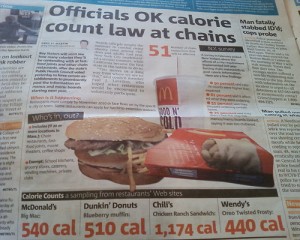 Q: Is calorie counting the only way to lose weight?

A: Is it the only way to lose? No. Of course not. Is it my preferred method? It’s helped me to lose over the weight and keep it off for a few years, now.

We have to define a few things, here, in order to make sure that we’re referring to the same concepts.

Firstly, there are tons of ways that people “lose weight.” People mindlessly cut out entire food groups, avoid certain food items and stick to merely fruits and veggies all without counting a single calorie… and if that works for them, that’s awesome.

That would never work for me, and I know that. You’ve just gotta know what works for you.

Calorie counting also freed me. It allowed me to learn how to learn to develop a balance and plan for social events when I can. If I know I’m going to have a day where I’m dining out at a fabulous restaurant with a in-house baked chocolate-raspberry lava cake that I know I’m gonna want? I can better prepare myself by eating differently during the day. Calorie counting freed me from feeling like I had to fear food and what it would/could do to me. Calorie counting helped me accept what I was eating, and helped me learn how to balance the calorie-heavy with the calorie-light.

For me, calorie counting was more than merely counting the calories. I learned food in a way that allowed me to branch off from calorie counting and to a more knowledgeable and comfortable form of eating to not only fuel myself, but enjoy myself in the process (“the process” being cooking, plating, dining and overall enjoying the time spent with my family.) I don’t have guilt or apprehension about what I’m eating. I know exactly what I’m eating and can accept what that brings to me – either a challenge of balance, or the comfort of knowing I don’t have to bother.

As I often say, with losing weight, it’s often about everything except food. In fact, the food is often the last thing it’s about for a lot of people. Once you get down to the brass tacks of it all and begin to learn to understand food again, you can, in fact develop a sense of what it’ll take for you to both live healthily and lose the weight. Doesn’t feel like it should be that simple, but it has been for me and that’s what I often promote here.

Kanye “Asks Kim To Lose Weight:” Would You Stay Or Leave?

Erika…this was EXCELLENT!!! I too am a calorie counter and it has worked for me. People always try and tell me counting calories aren’t the only ways to lose weight and I follow that with “do what works for you”. Thank you 🙂

Erika, just as Sandra said this was ANOTHER excellent article. I completely agree with you about how “freeing” calorie counting is. I’ve had “friends” tell me that is not a realistic way to eat and I have always told them “Sooooo eating w/o having any concept or accountability for what your putting in your mouth is more realistic ?” Loved the article and as always keep up the spectacular work !!! ( ;

Do you still keep a food journal to keep track of the calories you are consuming each day in the ‘maintenance phase’ or do you just maintain a running daily approximation in your head?

I track calories on Livestrong now – but I’m hoping that once I reach my weight goal I’ll be able to just eyeball it and be within my daily range to maintain my weight.

As I’ve progressed to different stages of what I’m doing with my body, I’ve cycled between journaling and not journaling. I journal now because as I’m changing my eating habits a bit, I want to make sure I’m getting adequate amounts of macronutrients (protein, fat, etc) even though I’m eyebaling my change. To be honest, it’s been such a long road since I first lost, I know that I’m capable of eyeballing it now. I don’t know that everyone would be able to successfully do the same once they get to where they’re going, and to be honest, the less a person has to lose, the longer they should journal, IMO. Their changes are so subtle, I feel like they’d need a while to get used to understanding what “100 calories less” actually looks like, IMO. Really, it’s all about comfort levels and keeping tabs. If you decide to venture out from journaling and catch yourself gaining weight, go back to journaling for a week and seeing where your discrepancy lies. It’s a cycle, and it gets easier as time goes.

I love your response to this question.

The greatest part about this article is that I’ve learned more, in the few minutes that it took to read it, about weight loss than I have learned from tons of books and years of dieting.

You’re right–it’s a simple concept. However, it can be so hard to do. Your blog definitely makes it easier.

Keep up the good work!

It works for me too. It helps me makes better food choices throughout my day

This article was right on time. I just recommited to calorie counting (again) through journaling YESTERDAY! I have lost weight but I have yet to reach my goal. I have 35 lbs to go. Journaling worked before but can be cumbersome. I derailed my progress bynot staying true to what works for me. I needed to read this article today to ensure I stay focused on my recommitment to my process. Thanks for being a vessel of God to me personally this morning! Have great day and continue to inspire! Later. 🙂

I despise calorie counting and that is usually where my battle to eat healthier is lost. Your response to the question does help take the edge off but I can’t say I’m there yet. I know it’s an important step I must take but when people explain it my anti-numbers shield flies up and I hear Charlie Brown’s Teacher’s voice (whant,whant,whant…). I am hoping that by the time we get to that step in Boot camp I will have made peace with calorie counting as a best practice.

Like Chelly, I was anti-numbers and resisted calorie counting for a long time. A couple of months ago, I signed up for a fitness challenge at my dance studio and part of the program required us to log toning, cardio, water consumption, meals and approximate calorie counts. I groused about it for a good two weeks into the program before I realized what a difference it made to actually pay attention to the calories. I lost fat, gained muscle in part due to the exercise but also because I was really paying attention to how many calories I was consuming. It made a big difference in choosing foods knowing that 100 calories could get me a huge plate of veggies or a measly slice of bread. The program is now over and I continue to count calories. I I don’t have to look up *every single thing* I eat anymore, but I keep a quick reference sheet of the foods I eat most often so I can refer to that for quick numbers. I’ve always enjoyed the benefits of food journaling, but calorie counting adds that extra “oompf” to the whole process.

I try to practice clean eating as much as possible, but I definitely still calorie count. It’s just what works for me. I’m an binger, but I’ve done restrictive diets before where I was essential an anorexic.

My last year of high school, I counted everything to the extreme and ate whatever as long as it was only 800 calories a day for almost a year… I also worked out intensely 5 days a week. I felt weak sometimes or hungry and I’d “sleep it off”. I recognize now that this was not healthy.

Then I went back to my usual extreme and ate without regret until after I had eaten everything.

And now I just count calories to 13500-1700 calories a day, with exercise. I try to eat as much veggies as possible. And it’s been working for me. I’m at the point now where I’m not losing a lot of weight a week, but it’s still working. I don’t go to bed hungry. I don’t crave food because I’m eating my fill of it.

But also, the best thing about counting calories for me is that I can reflect on what I’ve eaten. Like, one of my favorite dishes is gumbo. But I’ve realized that even though I LOVE it, for some reason it doesn’t fill me up like other foods do. So by keeping track of what I’m eating, I can modify what I eat the next day. Like, small bowl of gumbo plus a salad that actually fills me up.