Home It's All Mental Can Food Addicts Retrain Their Brains?

Can Food Addicts Retrain Their Brains?

Remember when we talked about Tara, the former Biggest Loser contestant who had to publicly endure a lawsuit for regaining some of her weight? I caught this article, and it only made me feel even more sympathetic to her plight, because yikes:

Tara Costa calls herself a recovering addict, but the substance she abused was food. 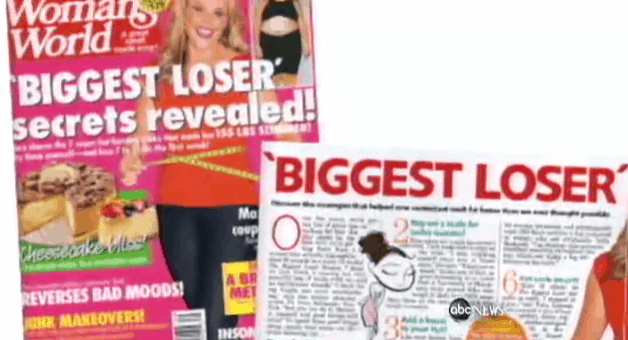 Costa wasn’t just overeating, she was out of control.

“I used to probably have a pint of ice cream almost every other night, if not more than that,” she said. “Not my proudest moments.”

Aside from a pint of ice cream, the former plus-size model said she would also devour wings and waffle fries smothered in cheese and gravy.

“That meal alone was probably around 6,000 calories, if not more,” Costa said.

By age 22, Costa tipped the scales at 316 pounds, and then decided to shed the weight in the most public way possible, on the reality TV show, “The Biggest Loser.”

On the show, she lost an astonishing 155 pounds, a transformation that landed her on the cover of magazines, such as “OK!” and “Good Housekeeping.” But when some of the weight started to creep back, she realized it wasn’t just her body she was battling, it was her mind.

“Now it’s not about willpower, it’s about — there might be something wrong up here,” she said, pointing to her head.

Dr. Pamela Peeke, a nutrition and fitness expert, said Costa is not alone. Although some doctors dispute it, Peeke believes emerging research is evidence that food addiction is real.

And it just might be playing into this country’s obesity epidemic. According to the Centers for Disease Control, more than one-third of American adults are now classified as either overweight or obese and obesity kills more Americans every year than AIDS, all cancers and all accidents combined.

In her new book, “The Hunger Fix,” Peeke argued that for some people, food can be as addictive as cocaine with some experiencing cravings, binging and withdrawal.

“It’s mixture of what we call the hyper-palatable ingredients and these are uber rewarding to the reward system,” she said. “In the brain, organically in the reward system, you’re secreting lots of that wonderful pleasure reward brain chemical called dopamine, and it’s coming out, and it’s just giving you that fantastic feeling of, ‘Wow, this is wonderful’… which is why my patients tell me, ‘I need a hit.'”

“[It] makes me feel good that, guess what, I’m not crazy,” Costa said. “There’s science now behind this that can help people.”

In her new book, “The Hunger Fix,” Peeke offers a prescription to get food addicts on the road to detox, rehab and recovery. She calls it the three “M’s”: Mind, Mouth, Muscle. By focusing on the three “M’s,” Dr. Peeke believes people can re-train their brains. [source]

Now, I actually got to meet Dr. Peeke years ago, right before her book came out, and I have to admit that the lady knows her stuff. When she starts talking about dopaminergic activity and muscle tissue, I get excited. The woman is smart.

That being said, I think there’s a lot to take away from Tara’s situation:

1) You never know what is causing someone’s weight gain – to simply identify it as laziness is, frankly, a lazy conclusion. You can be working your behind off, but if your emotional eating is resulting in binges that far outweigh what you’re burning in a day, you’re still going to gain.

2) At this point, in 2013, I’m incredibly skeptical of anyone who admits to not being able to control themselves, yet still says things like “addiction isn’t real.” The fact of the matter is, if you struggle with being able to control your ability to consume something on a consistent basis, and your binges – because, let’s face it, that’s what they are – track almost perfectly with stressful times in your life, you might have an emotional eating problem. A food addiction.

3) If emerging science is proving the reality of food addiction, then in theory it should squash the whole “Oh, you just need will power!” mentality. Overcoming food addiction – and, this is spoken as someone who is still recovering from hers – is about way more than just learning to say no to unhealthy food. It’s about learning how to not use food to cope with painful, stressful emotions. It’s about understanding your environment and how it contributes to the way you think, feel, and react to it all. It’s about understanding your addiction and what it does for you. It’s about realizing that those feelings that you get from food are not only unhealthy, but that you should avoid foods that bring that feeling to you at all costs.

All of those things impede a person’s ability to “just say no,” which is why I’ve always said the ideas of “will power” and “moderation” are crocks of… ahem. Moving on.

4) In the video on the quoted article, the newscaster presents the argument that “some say that food addiction cannot exist because you need food to survive,” implying that we’re all addicts of some sort. Now, I could easily write an entire post on that alone, but the reality of it all is that there’s a difference between eating food and using [and abusing] food. Hell, there’s a difference between emotionally eating food and enjoying food, too. It’s all about the intent, what drove you there, and what it’ll take to change your habit.

5) Dr. Peeke’s “3 Ms” talk about what she believes to be tools for fighting food addiction, and – as much as I adore her – I’ve got to be honest: that recommendation for what to do for taste and replacing one sweet with a “healthier alternative” makes me a little nervous. For me, knowing that my “sweet tooth” was more connected to my need to “feel better” made me want to fight that much harder again actually indulging it, to the point where I lost my desire for sweets. And, because I run a weight loss blog and am working to achieve a weight loss goal, it isn’t advantageous to my goal to give in to my sweet tooth, and with a smoothie, no less.

I’d just like to see a bit more praxis in the recommendations, though I understand the limitations of short-segment news – if most (that’s my guess, and it’s anecdotal, but there’s thousands of comments on the blog that lead me to believe it) people are having sweet tooth moments during stressful situations, advising them to solve what’s directly in front of them as opposed to drowning their sorrows in whatever candy might be stuffed in the drawer – or anything, for that matter – feels best.

6) Dr. Peeks also talks about muscle, and the way muscle development affects your brain and your genes. I’d like to take it a step further – the way muscle development positively affects your metabolism can change the way your body responds to an emotional eating relapse. Having a higher metabolism means you can eat more without, ahem, wearing it. So, when you get to the point where you’re discovering delicious cookies and pies that are flavorful and pack a lot in every little bite, you can enjoy them without guilt.

The big difference is we’re not dealing with the kinds of foods our ancestors ate, the kinds of foods needed for survival. We have access to over processed foods loaded with fat, sugar, and salt. I believe wholeheartedly that food addiction is real. I’ve just started tackling my own and, man, is it hard.

Food addiction is real. Especially in the past when I use to eat candy to get through finals. Processed foods make it worse because you get hungry faster.
I don’t believe in will power or moderation especially for foods that are made so you can’t stop at one. Food addiction is a very complex subject. This article makes me think about journey to a lifestyle change for the better.

I believe food addiction is very real for me.. I eat when I’m Happy , Sad , board, anxious.. You name it I have a reason.. I can Diet for a good week (7days). And it’s not a easy 7 days because of my food addiction I fall off the wagon.. I promise myself I’m going to stay focus and I don’t.. I go into these panic attacks when I don’t eat.. I hate it and I get so mad @ myself but I just can’t seem to control it. I wish I could because I don’t want to be my size.. I’m not happy with my weight @ all..
If anyone has any ideas please help.. Enjoy your Holidays!!