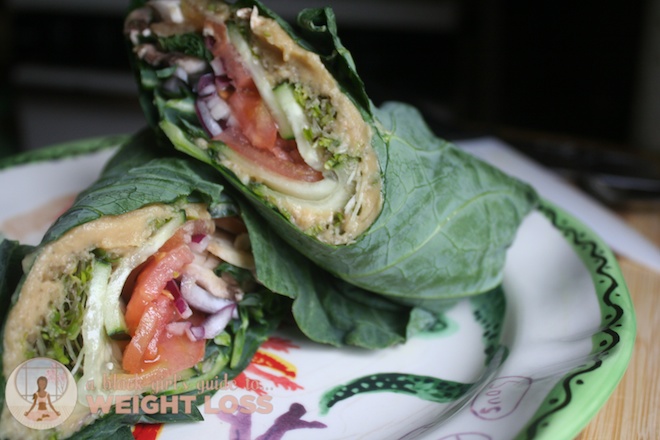 I know what you’re thinking. 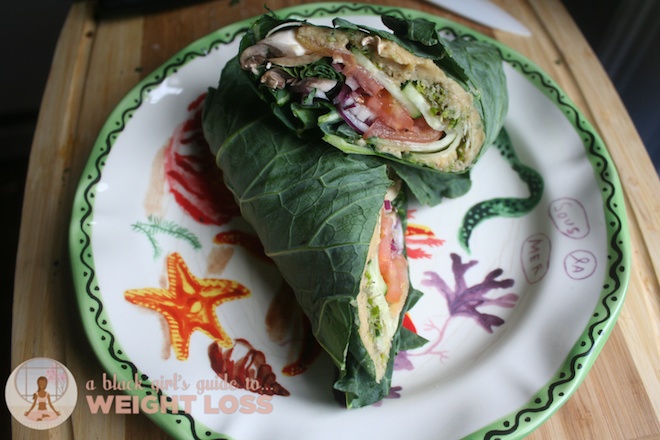 “That has to be disgusting.” “Raw collard greens are too bitter!” “No one would eat that!” 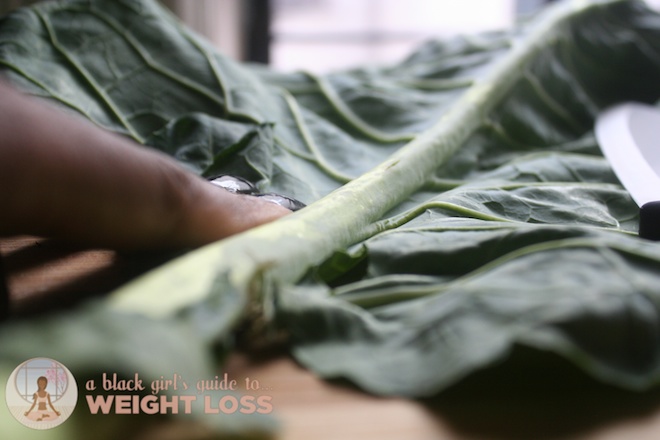 All I have to say is… you’re right. Well, sort of.

Raw collard greens are bitter, but they are so essential. Collard greens are your kale leaf’s sturdier cousin, with a similar nutritional profile. Tons of calcium, protein, fiber, countless antioxidants and minerals, and many of the natural antivirals and antibiotics we need. Collards have plenty of the vitamins that keep your hair, skin and nails flowing and growing; your blood and lungs pumping; your stomach and liver healthy; and your bones nice and strong. No wonder the old folks swore by collards.

So often, people make remarks about collards being “slave food,” and it confuses me – seeing as how, once upon a time, all food in this country was made by slaves – recipes often came from slaves’ home countries, cooking methods and techniques were brought here from native countries, ingredients and flavor combinations as well – all food is slave food. (And, really, we know how I feel about the term “slave food,” right?) 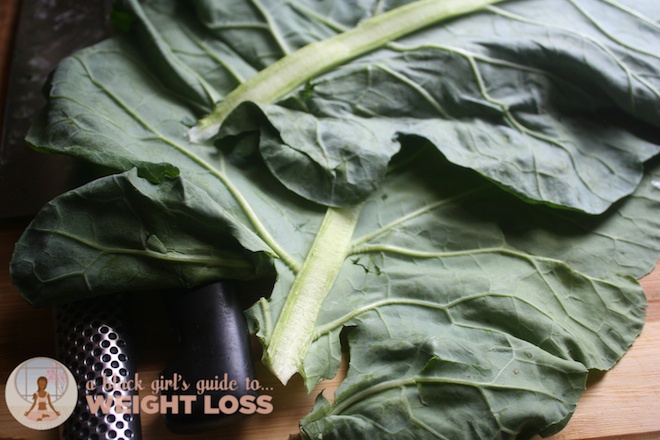 It makes sense, in my mind, that collards would become a target of people who want to blame soul food for The Health Plight of Black Americans in the 21st Century. I mean, I get it – a soul food meal isn’t complete without a giant pot of greens in the middle of the kitchen. Except… no one is spending hours cleaning, cutting, and simmering a pot of greens 7 days a week, three times a day… and I don’t know about you, but a pot of greens never lasts longer than a day or two in this house. Soul food is simply too labor intensive for the average black person – who, despite what certain media might lead you to believe, does have a job – to prepare often enough to do the damage its done to our collective health as a community. (For other reasons why we should stop skewering black foodways, read here.)

In other words, chances are far higher that your favorite lunch spot or the place you “stop by to pick up dinner” from is much more responsible for whatever health problems you might be facing than that pot of collard greens. 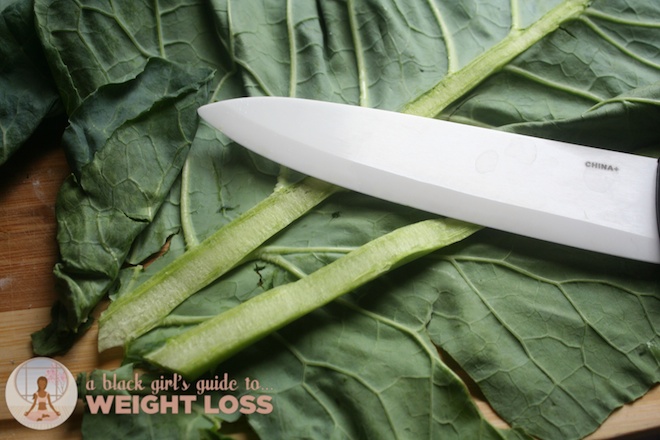 In our zeal to demonize a beloved tradition, we’ve disassociated from all of the other valuable things we get from collard greens. We cook them “into submission” by braising, or boiling them in water, because the leaves are sturdy, tough, chewy, and fibrous. You could find yourself chewing all day if you had a large enough portion. We cook them with fatback or ham hocks because that’s how you cook stock for soup. You boil meat, you draw the fat into the water for both flavor and nutrition (collards are full of fat-soluble vitamins, meaning they are best absorbed into the body when combined with a source of fat), you season it with a bit of salt – not an entire shaker, but yes, half a teaspoon or so for a few quarts of stock – and then you add your vegetables to stew. Really, collards are special to us because we’ve been cooking them for centuries, but the basic methodology is scantly different from making any other stew. You could easily swap out ham hock for chicken thigh, and be fine.

But today, we’re not going into the politics of the pot. 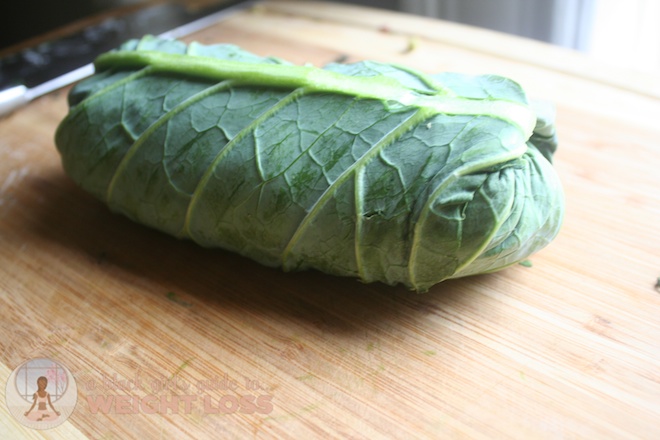 In The Welcome Table, Jessica B. Harris – my idol, she is – talks about Africans’ early appreciation for banana leaves. Sturdy, strong, resilient to heat and able to avoid burning easily, you could wrap food in a strong leaf and bake it under hot cinders, or place your wrapped food into a pot of water.

But then, I got curious – could I do this with a collard green leaf? And could I, instead of simply tossing the leaf aside, simply eat what I’d wrapped?

And, so began the challenge. 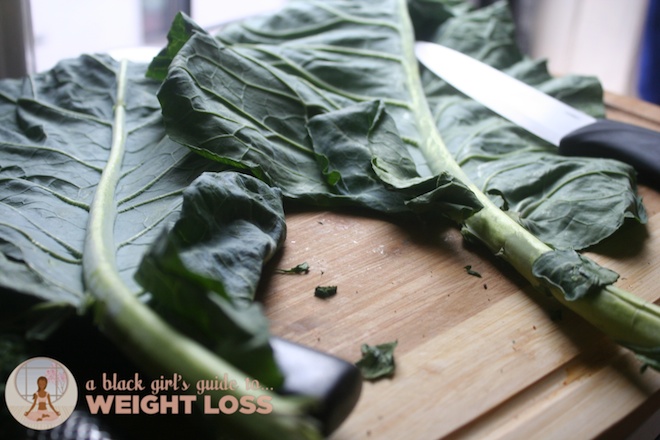 Collard green leaves are a bit tough. When we prep them, we generally tend to cut the leaves off the stem because, well, there’s no eating that stem. But, you need a whole leaf – not one separated because it was torn from its stem – in order to have a respectably-sized wrap.

If you notice, you can lay the leaf flat on one side, and see that the stem juts out from the leaf in a way that makes it easy to slice the stem off the back of the leaf, removing that backbone and allowing for the leaf to bend a bit more freely. If you notice the stem laying next to my finger, you can see it’s pretty darn huge. 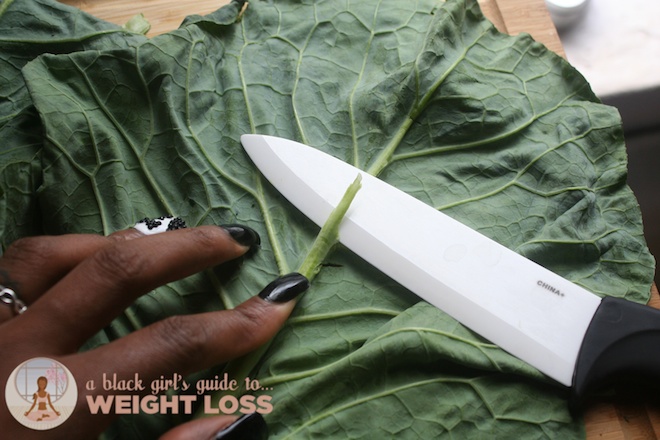 With a paring knife, you can cut that off. Carefully.

With a very slow hand, you can carefully carve the stem out of the leaf, leaving it in tact. For this recipe, you’ll need two de-stemmed leaves. 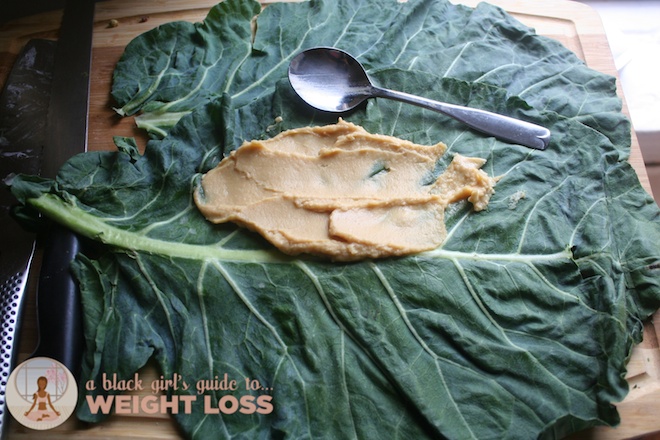 Part of what I’ve found makes a huge difference, here, is having a super flavorful spread at the base of your wrap’s stuffing. Barbecue sauce, avocado spread, yogurt sauce, whatever. Your mileage may vary. I went with an olive oil hummus. (You can make your own here.)

Spread your hummus onto one side of one of your collard green leaves, and then use it as the glue that’ll attach your second leaf to the first. This part’s important – layering the leaves correctly is what’ll affect your ability to stuff your wrap.

Boom. Now, on top of that hummus is where all the layering will go. Start with your… well, your whatever. Pay close attention to how much room I leave around the edges of my wrap, because remember – you need those edges to wrap it all closed at the end! Also, pay attention to the lower-left hand of the image above – see how ratted those leaves are? Be smarter than me – don’t use those kinds of leaves. Those parts are not only too weak to handle being wrapped, but they’re not connected to their stem, so they’d leave holes in your wrap. Messy, messy. 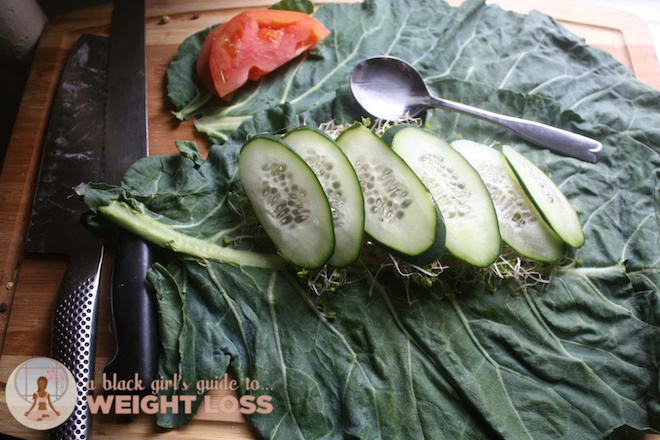 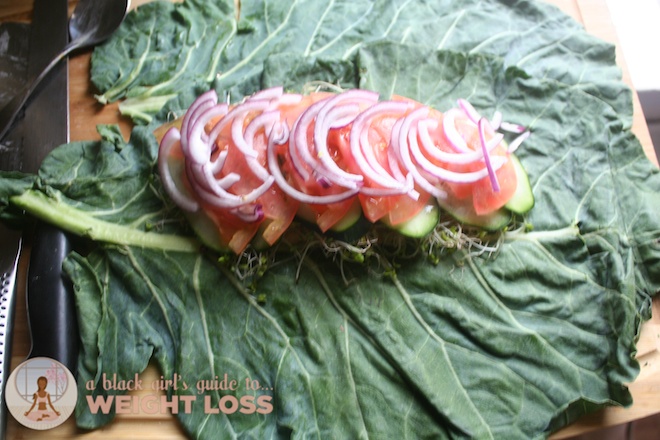 …half of a tomato, an entire red onion (that’s only sarcasm, but it looks like it could be entirely accurate, right? holy moly!), and another pinch of sea salt (clearly, these are very light pinches, but raw veggies still need to be seasoned)… 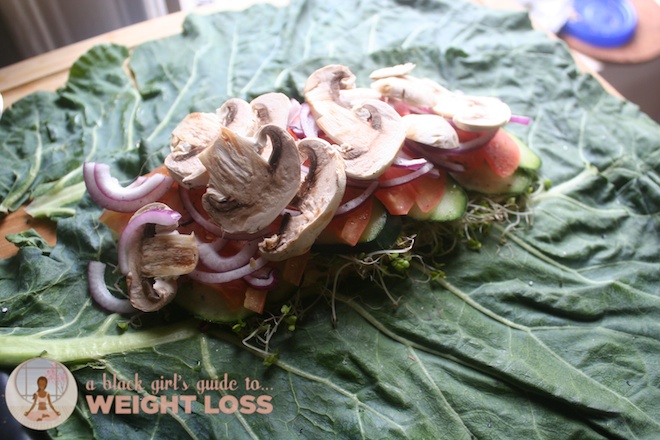 …and mushrooms! And, a little salt and olive oil later, and it’s time to get rollin’. 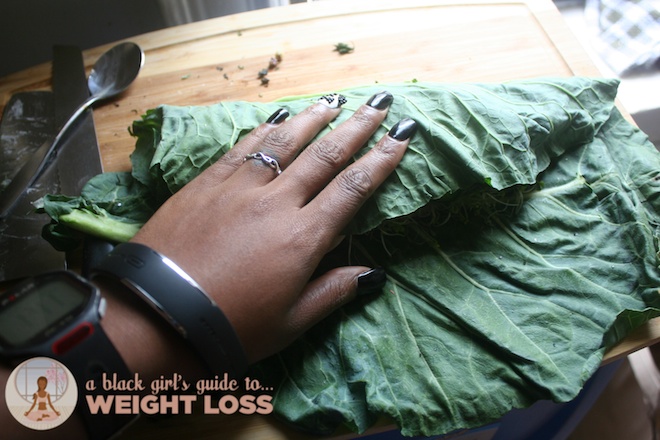 Side one, pulled super tight. 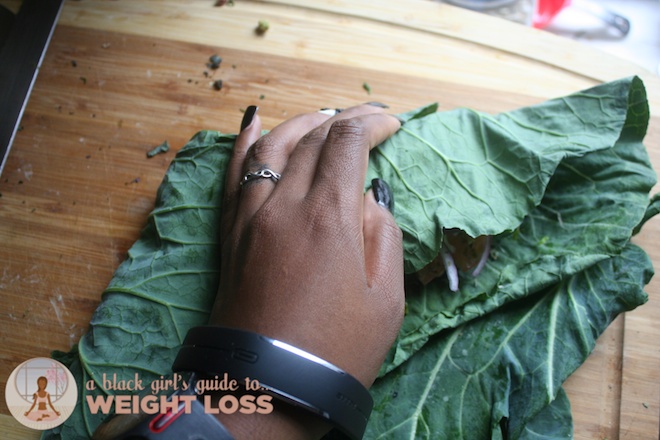 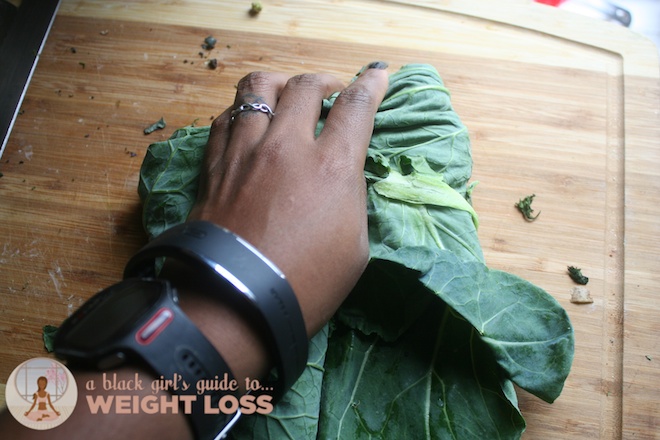 Side three! And now, it’s time for the serious bid-ness.

Roll your wrap tightly. Not so tight that you can feel the leaf attempting to tear, but enough that it doesn’t feel like your food is rolling around in there.

Now, you have two options. You can put this in an oven and bake it, or you can go completely raw (raw vegan, actually, if you follow this recipe and use a vegan hummus) and eat it like this.

Should you decide you want to cook the wrap a bit, you’d use a trick from my sauteed kale recipe – mix a teaspoon of oil into two tablespoons of water and a pinch of salt, and then brush that alongside the outside of your wrap. You could steam it in a skillet or steaming basket on low heat, or slide it in an oven to bake at about 300 degrees. That’s just enough heat to soften up the leaves without completely wrecking the insides of the wrap. I don’t know about you, but I hate soggy tomatoes.

If you’re going to bake it, I’d recommend you do it after the wrapping process. The leaves are oftentimes a bit soft and it makes wrapping difficult. The heat from the leaves can also compromise the veggies, making them a bit soggy. Thirdly, it’s a time-saver.

Doesn’t save as much time as just going hardcore with it, though!

I, of course, am hardcore. Raw, baby! 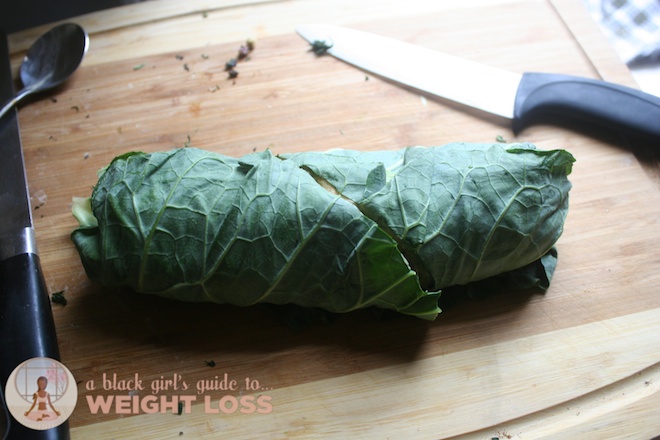 Give it a good diagonal fancy chop. C’mon – you learned the rules in grade school: a fancy diagonal cut makes even the flimsiest of PB&Js taste like magic.

Prop it up all fancy-like on your plate. And eat it – gleefully – with two hands. Because you won.

So not to open this talk up again but “slave food”. Sometimes I really think people are ashamed of their history. Our ancestors were strong people who should be respected for enduring things that we can’t imagine. If that makes sense. To make a reference that this is something that slaves ate is silly and mocking. Folks need to have a little more respect for their own history.

Anyway, the wrap actually looks good, and I’m willing to deal with bitterness if it means I don’t have to have the sketchy stuff that we find in a wrap. If it means me not having to search and search for good wraps then i’m here for it, espeically given how cheap they are. I might have to sprinkle some meat in there though but other wise it looks good enough for me try.

Wow, that looks amazing. How was it? And do you put the hummus on twice (once as a glue, once as a base for the veggies?) I see a lot of hummus in the sandwich but not in the veggie-laying pics.

Nope, just once as the base. You can see it in the laying, but that’s from the first time when you’re creating the paste.

I have always been interested in trying collard greens. So I will definitely put this on my to do list. Also I a saw you mentioned the use of banana leaves in some African cooking. It reminded me of these Guatemalan style tamales a friend used to make for Christmas. They used banana leaves instead of corn husks. The aroma was amazing and added to the flavor.