Friday 5: 5 Tips to Help You Create SMART and Successful Resolutions

Since it’s that time of year, where everyone decides to commit to being a “new me in the new year” or some other cute slogan, I figured I’d see what I could do to give you a jump start on successfully creating realistic, accomplish-able goals in 2013. 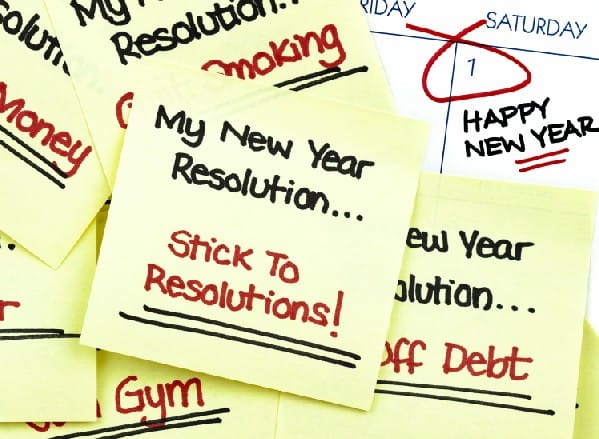 I mean, let’s be honest with ourselves – most of our goals are complicated, complex, and far more involved than the one sentence that encompasses it all. “I want to quit smoking,” “I want to lose 1,000 pounds,” or even “I want to save up all my money, invest and be a bajillionaire” (I can’t be the only person to make that resolution every year, then devolve into a puddle of spending at the nearest workout clothes sale… can I?) aren’t the kinds of goals that are accomplished immediately or even easily, and if your plans don’t include all of the complicated little things that will interfere with you succeeding… let’s just say you might be one of those people, in March, with a gym membership you haven’t used since January 23rd… but’ll be paying for it until December.

I mean, it’s one thing to tell your friends that your resolution is to “lose weight,” or “own your own gold plated g5 by the end of the year” or something. But what do you tell yourself? And how do you go about creating that plan of attack?

In my studies, I came across this neat little acronym that helps with setting goals. It’s a great way to quantify the entirety of what you’re aiming to accomplish, and help you figure out where your first steps are.

And, of course, since the acronym is five letters long…. of course I couldn’t resist but to capitalize on it, right?

1) Your goals should be Specific. Your goal should be so pointed and specific that anyone would figure out exactly what you’re going for with it, especially when it comes to your body. It’s not enough to say “I want to lose weight.” What kind of weight do you want to lose? And, from where?

2) Your goal should be Measurable. An important part of keeping yourself psyched up is having a marker to designate what “success” looks like to you, and seeing yourself inching forward towards that goal by taking frequent measurements of your progress. It’s not enough to say “I just want to lose weight;” How much do you want to lose?

3) Create goals that are realistically Attainable. It’s probably not likely that I’m going to own my own gold plated g5 by the end of the year, and it’s probably not likely that you’ll [safely] lose 100lbs in four months. Double checking your goals for attainability also will help prevent you from being discouraged early on in your journey. At the same time, a weight loss goal that isn’t challenging enough will fail to keep you both engaged and motivated. If it’s not challenging you to work hard, then you won’t work hard… you won’t see progress… and you won’t be encouraged to continue. It’s not enough to say “I just want to lose 100lbs.” Do you want to lose 9lbs a month for a year?

4) Make your goals – and your means of achieving them – Realistic. Basically, keep it 100 with yourself: are you really… really going to quit the sweets cold turkey? Or are you setting yourself up for major league disappointment? Wouldn’t it be more sensible, knowing how much you love that raggedy after-lunch cupcake, to say that you’ll keep your cupcake but that you’ll get a better quality cupcake once a day and limit all the other junk food and sweets you buy? That way, you’re not “depriving” yourself and still enjoying the goodness of that orange velvet cupcake with the whipped cream icing, but your cutting your junk intake and still moving towards your goals?

5) Time matters. You should always give yourself a deadline; a realistic deadline, but a deadline, nonetheless. If you’re a master procrastinator, like me, you need to know there’s a point in time where you just need to put your pedal to the metal. If you know that you want to lose 9lbs a month, that tells you that you need to work hard enough to lose a minimum of two pounds each week. It gives you shorter-term goals that you can work towards, to keep you more involved and “in the trenches,” so to speak, when it comes to getting what you want.

When creating your plan of attack, it should always keep these five components in mind, but (and this is taken directly from my textbook) it should answer the following questions:

What am I hoping to accomplish?

By what date do I hope to achieve this goal?

Do I need special equipment, books, time, or support to get it done?

What do I need, on a daily basis, to achieve my goal?

How will I keep track of my status?

What is standing in the way of completing my goal, and what will I struggle with the most? How will I handle these things? As I shared before, I use a goal tree to help me figure out what I need to do. Hopefully, it helps you, as well.

While you’re creating your plans of attack, challenge yourself but also leave space for the ability to explore the issues that might hold you back. Give yourself space to start off slow, and let the momentum of success take you further in towards working hard to achieve. Before you know it, it might be June, you’re looking and feeling better…instead of regretting the contract you signed in January!

Omg girlfriend its like you read my mind…my mum and I set smarten goals for ourselves geared towards weightloss just this morning!!! And one of them, for my mum, includes reading at least one of your posts every day! 🙂

I’ve heard of creating SMART goals when it comes to planning for a career, but I like how you applied it to weight loss.

Hi Erika! I love the post on S.M.A.R.T. goals, I use them all the time. The goal tree is innovative, I’ll add that to my goal setting presentation. Do you incorporate vision boards as well? I just posted about them on my new blog. They work well with putting S.M.A.R.T. Goals in action.

I set and work on goals throughout the year, so I don’t have to worry about it on January 1- they’re already in progress 🙂

I am setting up Smart goals for the year. I already started working on them. One of my goals is to make more home cooked meals that I enjoy.

This is great! This system that you have described known as SMART is the system that is in place at my job. This is a very successful system.

SMART goals are awesome and I’ve never considered using them with fitness and weight loss! This is why I follow you!