I’ve grown to feel like buying organic is an art form.

In fact, I’m starting to think that when people complain about buying and eating healthily, they’re talking about the price tag on organics. It can definitely be a bit of a shell shock, and in some cases, rightfully so. A quality product, put together in quality containers with quality ingredients? We’d expect a lot of handiwork to go into that, and a lot of money, as well. 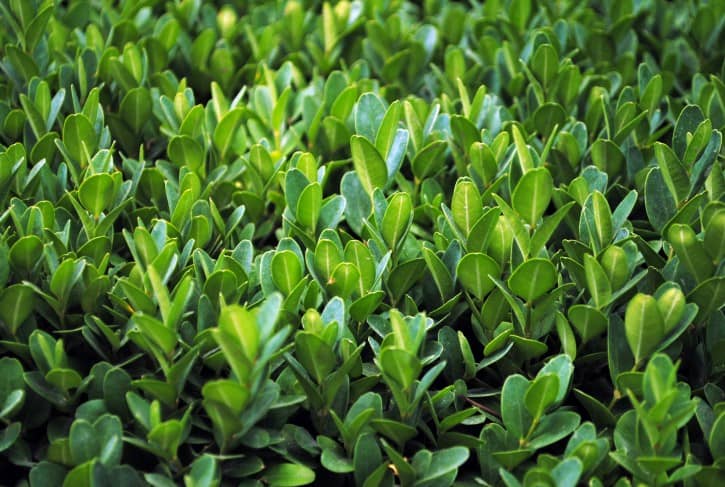 However… that’s not always the case. That being said, this week’s Friday 5 is all about five things you should know about buying organics:

1) The USDA is the only body responsible for the federal regulations regarding the organic label. From the USDA blog (!), organic means the following:

USDA certified organic foods are grown and processed according to federal guidelines addressing, among many factors, soil quality, animal raising practices, pest and weed control, and use of additives. Organic producers rely on natural substances and physical, mechanical, or biologically based farming methods to the fullest extent possible.

Produce can be called organic if it’s certified to have grown on soil that had no prohibited substances applied for three years prior to harvest. Prohibited substances include most synthetic fertilizers and pesticides. In instances when a grower has to use a synthetic substance to achieve a specific purpose, the substance must first be approved according to criteria that examine its effects on human health and the environment.

As for organic meat, regulations require that animals are raised in living conditions accommodating their natural behaviors (like the ability to graze on pasture), fed 100% organic feed and forage, and not administered antibiotics or hormones.

2) When it comes to organic processed food, however…

When it comes to processed, multi-ingredient foods, the USDA organic standards specify additional considerations. Regulations prohibit organically processed foods from containing artificial preservatives, colors, or flavors [note: this doesn’t specify that genetically modified ingredients are prohibited] and require that their ingredients are organic, with some minor exceptions. For example, processed organic foods may contain some approved non-agricultural ingredients, like enzymes in yogurt, pectin in fruit jams, or baking soda in baked goods.

When packaged products indicate they are “made with organic [specific ingredient or food group],” this means they contain at least 70% organically produced ingredients. The remaining non-organic ingredients are produced without using prohibited practices (genetic engineering, for example) but can include substances that would not otherwise be allowed in 100% organic products. “Made with organic” products will not bear the USDA organic seal, but, as with all other organic products, must still identify the USDA-accredited certifier. You can look for the identity of the certifier on a packaged product for verification that the organic product meets USDA’s organic standards.

You wouldn’t expect a product to be allowed to boast about “organic” anything if it weren’t completely organic, but the NYTimes has a few thoughts on that:

Between the time the Agriculture Department came up with its proposed regulations for the organic industry in 1997 and the time those rules became law in 2002, myriad small, independent organic companies — businesses like Cascadian Farm — were snapped up by corporate titans. Heinz and Hain together bought 19 organic brands.

Eden is one of the last remaining independent organic companies of any size, together with the Clif Bar & Company, Amy’s Kitchen, Lundberg Family Farms and a handful of others.

BIG FOOD has also assumed a powerful role in setting the standards for organic foods. Major corporations have come to dominate the board that sets these standards.

As corporate membership on the board has increased, so, too, has the number of nonorganic materials approved for organic foods on what is called the National List. At first, the list was largely made up of things like baking soda, which is nonorganic but essential to making things like organic bread. Today, more than 250 nonorganic substances are on the list, up from 77 in 2002.

The board has 15 members, and a two-thirds majority is required to add a substance to the list. More and more, votes on adding substances break down along corporate-independent lines, with one swing vote. Six board members, for instance, voted in favor of adding ammonium nonanoate, a herbicide, to the accepted organic list in December. Those votes came from General Mills, Campbell’s Soup, Organic Valley, Whole Foods Market and Earthbound Farms, which had two votes at the time.

Big Organic lost that round. Had it prevailed, it would have been the first time a herbicide was put on the list.

3) Organic is the only term that is federally regulated, and this is not the same as seeing “organically farmed,” “natural,” “locally grown,” “sustainable” or “organics” on a label. Lots of companies are trying to pull an end run around having to go through the hoops and pay the expenses of being certified as organic by a respectable organization, and are instead trying to circumvent the process by adding some derivative of “organic” in their brand name, or by co-opting the phrases that we all associate with some kind of wholesome, backyard farm set-up. Don’t be fooled. If you’re looking for something that avoids pesticides…

4) ….organic isn’t always a guarantee. From another post on the USDA blog:

Organic standards are designed to allow natural substances in organic farming while prohibiting synthetic substances. The National List of Allowed and Prohibited Substances—a component of the organic standards—lists the exceptions to this basic rule.

Some synthetic substances are listed as exceptions to the basic rule and are allowed for use in organic agriculture.  For instance, pheromones have long been used as an effective, non-toxic way to “confuse” insects that may otherwise infest organic crops, especially fruit. Likewise, vaccines for animals are important disease prevention tools against many infectious diseases, especially since antibiotic therapy is prohibited in organic livestock.

The National List also allows certain processing aids, such as baking soda. This substance lightens (or leavens) the dough for organic pancakes, baked goods, and other products.

Conversely, some substances like strychnine and arsenic are examples of natural toxic substances that are prohibited in organic production.

A U.S. Department of Agriculture survey of produce that found nearly 20 percent of organic lettuce tested positive for pesticide residues piqued our interest. Lots of the lettuce contained quite a bit of spinosad, a pesticide marketed by Dow Chemical under the brand name Entrust.

So we called Jeff Gillman, a professor of nursery management at the University of Minnesota, who has written about organic practices for lay readers. Right off the bat he told us:

When people are buying organic food, they often make the incorrect assumption that there are no pesticides. It’s true that organic production often uses fewer dangerous chemicals, but certain pesticides are allowed.

It turns out that a key factor in chemicals being cleared for use on organic crops is whether they occur naturally. Spinosad, for example, comes from the soil bacterium Saccharopolyspora spinosa. It can fatally scramble the nervous systems of insects. It’s also poisonous to mollusks.

One of my favorite things to do is find the booths at the farmers’ markets that proudly (and bluntly) proclaim, “no hormones, no steroids, no pesticedes, no NOTHING.” Gotta love that.

(And, to be fair, if you’re concerned about the honesty of those small time, farmer’s market produce hawking farmers? Their honesty is just as reliable as the larger farms and the larger brands who use them… and if you’re wondering who’s responsible for what brands… never forget: 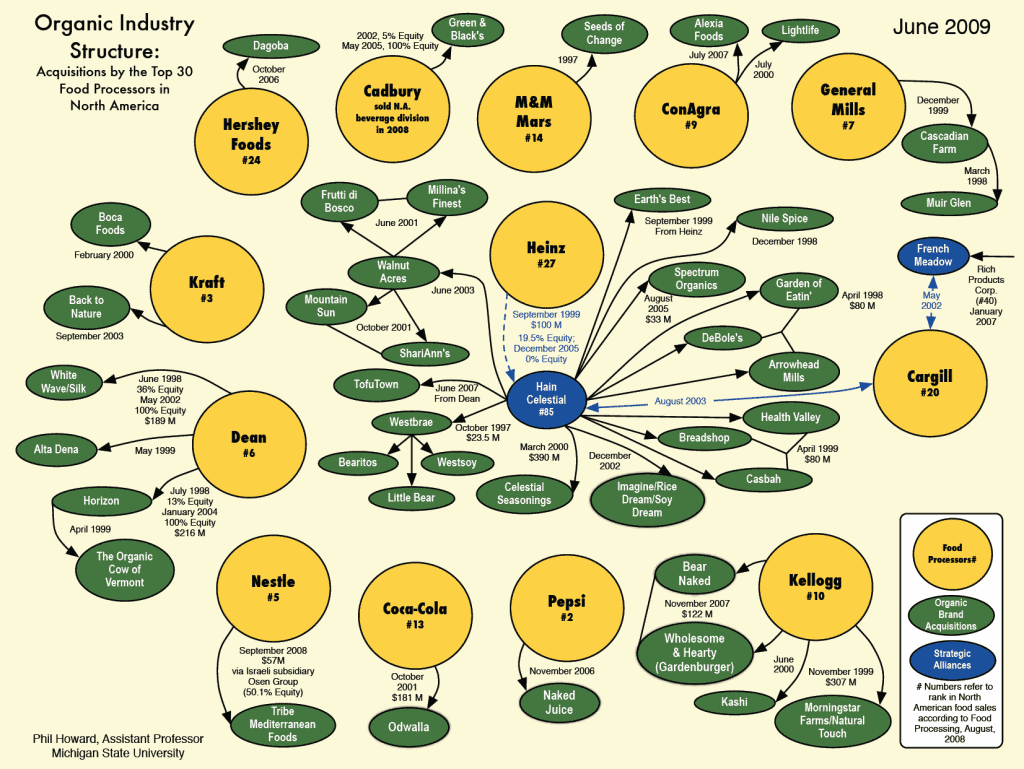 Who owns organic? From the Cornucopia Institute

5) Lastly, buying organic doesn’t have to equate to buying something – or anything – high priced. As I did my best to illustrate in the #surviveon35 campaign from this summer, you can do so and do it both inexpensively and honestly. I’m a huge fan of Whole Foods’ frozen organic fruits and veggies, and their bulk section has tons of organic staples and…you’ve already heard all this before. Lots of food co-ops and CSAs will trade great deals and even “free” food for a little bit of your time on a regular basis. If you’re on food stamps/SNAP (or considering it), lots of CSAs will offer you a sharply discounted rate, payable in monthly installments (so you don’t have to do the bulk payment, which can be pretty steep) instead of going full price. (And, even more, farmer’s markets across the country are now offering $20 in tokens for $10 in food stamps, to make it easier to buy organic. You didn’t know about the tokens, did you?)

I’m a huge proponent of eating and living healthier, but in all things, honesty and integrity of the genre is important. Organic doesn’t always say what we think it says, nor does it always mean what we think it means, but when we find open and honest purveyors, we should support them both with our money and our loyalty. That being said, find yourself some amazing local resources – hopefully ones that aren’t afraid to answer your questions and give you suggestions – that you can count on, and create that mutually beneficial relationship, The environment will be better for it, our community will be healthier for it, and you (and your wallet!) will be better off with it.

This is a great post. People always assume that organic is the best choice for health, environment, etc. Regardless of what food we buy, I think it’s good to be informed. I love your blog!

Thanks Erika education about organic food is important. It is important to know what your buying. Since being a shopper I have been shopping at local Food coops and the union square farmer’s markets and also asking them questions or reading up on their farmers practices. I prefer the prices of Whole Foods organic brands. I also just started shopping at the famer’s market.
BUT I have a question about buying vegetables at farmers markets , “how do you tell if the vegetable you are buying is fresh if the leafs are yellowish green?

A yellowish-green isn’t bad if the leaves still feel strong. If it feels weak or wilted, or limp, then maybe you might wanna look for another batch.

Love it. My issue is that the prices for my farmers market is going up and I feel like I only get a lil produce for the price I pay…and I am not always sure if the produce I am buying is completly pesticide free…
Even though they say it is