Home Friday 5 Friday 5: 5 Reasons Why Pole Dancing Should Be An Olympic Sport

Friday 5: 5 Reasons Why Pole Dancing Should Be An Olympic Sport

So, in light of the Olympics, Time Magazine asks the question, “should pole dancing be included in the Olympics?” 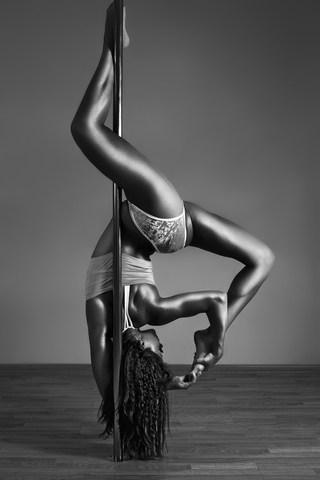 While pole dancing may have originally been inspired by the routines performed by dancers in strip clubs, today’s practitioners are adamant that it is truly a sport. “These women are incredible athletes. They have such grace and elegance and they absolutely belong in the Olympics. But we do fight the stereotype that it’s for strippers,” IPSF founder and president Timothy Trautman told Buzzfeed. Watch a few routines on YouTube and you may agree that pole dancing requires above average athletic prowess.

As the ostensible sport attempts to shake its shady reputation, the International Pole Sports Federation has started making tentative steps in the process of becoming officially recognized by the Olympic Committee in the hopes of being included in future Games. According to the Official website of the Olympic Movement, “To make it onto the Olympic program, a sport first has to be recognized: it must be administered by an International Federation which ensures that the sport’s activities follow the Olympic Charter. If it is widely practiced around the world and meets a number of criteria established by the IOC session, a recognized sport may be added to the Olympic program on the recommendation of the IOC’s Olympic Program Commission.” Once the baseline requirements are established, the sport can eventually draft an official petition for consideration by the International Olympic Committee.

The IPSF is just at the beginning of their journey towards establishment, but they are making progress. According to Buzzfeed, IPSF has already written bylaws and and an official rule book for pole dancers. They’ve also organized the first World Pole Sport Championship, an event the organization has cannily scheduled to take place in London just days before the Olympics kick off.

The road to Olympic recognition is a long one, however. Therefore if you are interested in the sport, but have no experience in pole dancing, there’s still time to train for your Olympic dream. The IPSF doesn’t expect to get Olympic consideration until 2020.

Anyone who knows me knows my answer already: of course it does! And here’s five reasons why:

Yes, she sure did hit that vertical moonwalk on you. She sure did.

Get all the way into all those aerial gymnastics she performs around the 2:40 marks.

I don’t really get along with any Usher song made after 8701, but if you watch this video on mute? It’s pretty awe inspiring.

Even though she doesn’t post much on youtube anymore, the videos she’s left behind are pretty dope.

And last, but certainly not least…

Now, again. Someone give me a reason why, short of “OMG they wear skimpy clothes and spread their legs,” pole dancing – also known as aerial performance or vertical dance – shouldn’t be considered a sport? Because, um, if that’s the case, then both gymnasts and volleyball players got some ‘splainin’ to do, Lucy.

Video Vault: Hip Hop Music Educates Us On How The ‘Hood Diet’ is the ‘New Crack’

Having just completed my first pole series. I am in total agreement. It is amazing what these women and me can do!

I agree that the people that pole dance are extremely athletic, but I think it’s origins are going to keep it out of the Olympics. I’m having a hard time with it myself, although I disagree with that bias.

First, Zoraya Judd has been my pole crush FOREVER!!!! She is AMAZING (and her husband is, too). Second, I’m a little hurt that you put Felix Cane after Jenyne Butterfly, but both are INCREDIBLE!!!! Third, if you want to talk about male pole dancers, please check out Josiah Badazz Grant and Steven Retchless. I really do hope that Takeila starts performing again. I have seen all of these performers live and they are great. Great article! Poling ABSOLUTELY should be considered for the olympics. Anyone who disagrees, please show do a spatchcock or an Iron X and then talk to me.

LOLOL I hate those people! Don’t look at me funny… just help me find a class! LOL!

I once made the mistake of telling a male coworker that I was taking pole classes, and he laughed for over a minute. People are either really into the idea or they have a big problem with it.

I don’t think a lot of people really know what goes on in pole studios. Their imaginations are way more salacious than the reality!

I’ve learned, unfortunately, that critical thinking is hard. It’s hard to look at something a new way – pole dancing as “fitness” and not some perverted thing – even with basic facts.

I just… I have lots of sads about it.

If jumping on a trampoline is an Olympic sport this should DEFINITELY be one!! 😉

The first one is impressive, she is so thin but those muscles must be in iron seriously…. Wow. That should really be an Olympic sport, no reason it shouldn’t!
Thanks for making me dream today!!

For my birthday’s I like to rope my friends into some event or thing that I’ve been meaning to do but haven’t got around to it. A few years ago it was pole dancing, some were a bit sceptical but on the day we all had a great time, I even managed to swing upside down. I gained an appreciation of the strength and skill involved, it’s a great workout and it brings out your inner seductress too 🙂

As much as I enjoyed it, I wouldn’t necessarily agree that it should be classed as a sport to be included in the Olympics, at the same time I wouldn’t oppose it.

Fitnessbuster supporting you in improving your fitness and nutrition.

Wow, those were some amazing videos. I actually frequent strip clubs and every time I go, i tip the girls who do pole work extra cause I know that is not easy and they had to practice. I hope to take a class myself within the next year

Olympic sports are based on war training. The skills gained by practicing and competing in the events that are currently in the Olympics translate into skills needed to defend &/or due battle for the Motherland. So unless you plan on using pole dancing as a distraction technique while the warriors storm the castle, it has no business in this competition.

How about race walking?

Certain kinds of gymnastics? Like, say… pommel horse? For crying out loud, women don’t even DO pommel horse.

Clearly, some of y’all are struggling with this. “Based on war training.” ROFL

I’m with Beverly, hurt at Felix being placed at #2! lol But I would love to see it!

Takeila is amazing! I deemed her my pole-model, when I began. She’s so kind and talented – in skill and instruction.

But, yes … I’m all for poling to be considered an Olympic sport. Just give them a little corner on the gymnastics floor and see how it goes, lol. And a clause for the war-training stipulation, may I introduce you to the ‘The Flag Pole’ move? It’s quite patriotic. ;o)

i ain’t mad at them – go on to the Olympics. now i gotta go work on my core if i am going to remotely be ready to try any of that any time soon.

It takes a great amount of strength, grace, and determination to do pole dancing. I’m not sure how they would get it going, but good luck to them!

One of my goals is to master the art of pole dancing. It looks so intimidating. This should be an Olympic Sport. I thought the Olympics was based on athleticism. Pole dancing takes alot of strength of the entire body.

The reason I started my weight loss journey was so I could join a local Pole Dance group. I was told that the max weight on there poles is 225lbs. I at the time I was 321 and now almost 6mnths later I’m 25lbs away. Pole Dancing here I come!!!!