As someone who worked her way through college waiting tables… I’m always mortified by this kind of foolishness. Located in the upper-left-hand corner of this bill underneath the phone number… you’ll see it. 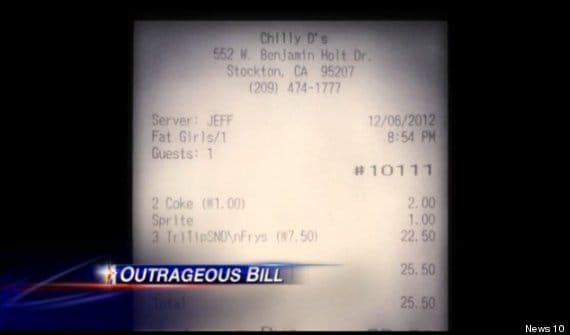 As fast paced as the restaurant industry is… you wrote that stupidity on your table’s check – let’s face it… HE wrote it – and thought they wouldn’t notice? Thought you’d have time to erase it?

When their server returned, the three girls questioned him about the “fat girls” label, but the waiter denied any wrongdoing, according to News 10. He said an employee named “Jeff,” whose name appears on the receipt, must have typed “fat girls” into the system to keep track of their bill.

A manager went over to explain the “fat girls” check, but he “had like a smirk on his face, like it was funny but trying not to laugh,” Duran told ABC News. Instead of clearing all charges, he offered a discount of 25 percent and then a discount of 50 percent, but the women rejected the offers. [source]

Listen. People being jerks… I feel like there have been enough instances, this year, of people being scumbags and putting stupid stuff on receipts. “Chinky eyes,” “Ghettoville, USA,” “you could stand to lose a few.” Really, the random occurrence of people being dirtbags… this is unremarkable. I was actually impressed that the employee was fired behind this.

The comments section – I know, I know… the cardinal rule of Huffington Post is “don’t look at the comments,” and I learned that when I was featured there a year or so ago – is riddled with foolishness! I mean, holy moly:

I agree, it was wrong to put Fat Girls on the check. However, it wouldn’t hurt them to drop 50 to 100 pounds.

Well, they are fat

They should have included photos of the diners so we could verify whether they are in fact, fat girls…

Actually, these women have a lot of gall to go on TV with this complaint. They are FAT! It is an indisputable fact and now they look even stupider for having called attention to their grotesque obesity. Granted, the server should not have written it on the bill, he should have just chuckled to himself, but he didn’t tell a lie. I’ve worked as a waitress all through college and I would never be able to say out loud what I called certain customers – I just didn’t put it in writing.

So, basically… common courtesy flies cleeeeean out the window if you’re fat?

I’m not surprised at all. I’m glad that employee got fired and I’m glad those women held their ground. Everyone deserves common courtesy. I’ve never heard of wait staff putting any description other than “party of __” on a check though.

I used to work at Apple and we used to put customer descriptions in to the system to make it easier to find them for tech appointments. These descriptions were never seen by or printed on anything for the customer, but he managers would monitor the descriptions and if they were the least bit inappropriate you got a serious warning on your record.

Apparently its true- if you are fat then you are not worthy of human respect, kindness and courtesy– because you’re not human.

In reality, its just that people of size happen to wear an insecurity they may have out in the open. Its like wearing a sandwich board saying “this is my tender spot– poke me here!”And the only reason they’re tender about it is because society has made it okay to have your body size be a proxy for your worth as a person.

I’m glad the sever got fired. We need to begin holding everyone to a higher standard of how to treat your fellow humans.

Totally agree. Just because you can see the issues they have with their weight does not give them permission to disrespect them.

Everyone has issues. Tired of men who think they are entitled to pass judgement like all women are there for their enjoyment

Are they putting ugly or acne face on other diners bills? This is just ignorant.

What happened to “table 23” or “Waiter A’s first booth”? The manager smirking is what got me too. Seems as if you’re not a certain size you are treated as less than human. On a daily basis I promise someone is going to talk down to me at some point.
If I happen to go into a restaurant the waiter will say in a sing-song voice,” Ohhh you know you want a dessert. Come on…” o_0 Really buddy?

There is usually one thing each day that makes me think *I really hate people* the server and those comments on the original article are what did it today. What happened to kindness, compassion, and just being a decent human being? Sheesh!

Unreal how rude people are! I’ve used descriptions (privately, on my own papers) as a waitress before, but I would feel like such a bad person if I even wrote down “fat girls” on my own personal scratch pad! Is it that hard to put down “red scarf”, “black shirt, or “really friendly/grumpy/whatever”.

Why is judging someone on their weight so ok in today’s society? And where do you think all of these extreme bullying cases in schools are learning their behaviour from; they’re learning from terrible examples of parents and other adults in their lives. I think instead of just focusing on the youth in society, we really need to focus on all of the hate and judgement that is coming from all of the older generations.

Almost anyone who grew up fat especially when they were younger know people treat overweight people the worst. I lost 38lbs before i went off to college and the way I was treated changed going from a size 10 to a size 4 changed the way I was treated how i was approached. Not because I was with older people (who are just secretly mean unlike children) but because of my size.

well she ate like a fat girl, who drinks 2 cokes and a sprite with a meal?

Lots of people and, surprisingly, we only seem to notice – and chastise – the overweight ones who do it.

Are you serious? It was a table of three. And it wouldn’t matter if she, or any of them, ate for ten. The point is that the server, and the manager, we being insensitive pricks. It’s fine to think whatever you want, but when you work with the public, in any capacity, this kind of behavior is unacceptable.

It really don’t matter what she/they ate; they paid for it and had no right to be humiliated!

The rude manager needs to be fired too. It’s bad enough that like his employee he’s fat-phobic, but couldn’t he at least pretend to be a professional? Couldn’t he at least muster up a modicum of manners and basic home training and get his laughter out before approaching these customers? Disgusting.

And the commentary on Huffpo used to be intelligent and insightful until the site merged with AOL and unleashed a cesspool of bigoted, teabagger, “Obama was born in Kenya”morons on the website. The level of discourse went from reasoned and educated, to hateful and absurd. Don’t bother with the comments on that website, you’ll definitely burst a blood vessel in your eye.

Wow this is so mean. Fat shaming at its finest. After reading this article, I went into the health food store downtown to get nuts and fruit and this nine year old kid( little boy) called me Mc Fatty. He said to me stop buying all the food fat girl. yesI can feel their pain.

Kids – especially ones with bad parents – are the worst little people EVER.

So sorry you endured this.